Wladimir Klitschko : Gold medal winner at the 1996 Olympics and holder of the World Heavyweight Championship holding the IBF, WBO & IBO Heavyweight titles , he is a formidable boxer with a fight record of 67 fights , 64 wins with 53 knock outs and just 3 losses.
Aged at 39 Klitschko is nearing the end of his career , some would say he's reached the end of his career. 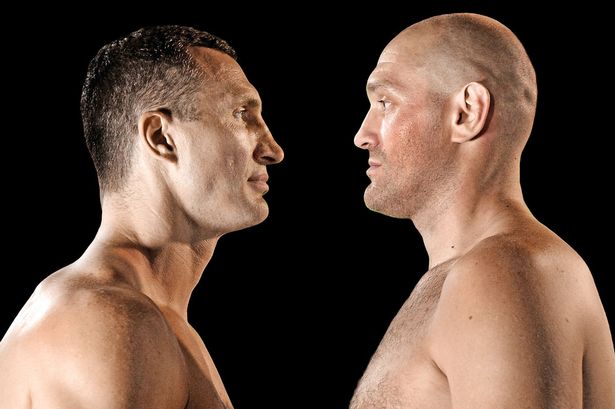 I wouldn't want to meet either of these two down a dark ally but for me it's Fury in the 7th by KO or TKO.

I'll take the Irish kid.
I've been a student of the game my whole life and have been training people,my Irish ginger has been my best fighter,Irish are tough and youth beats age.....also 6 foot 9,wow.

Gotta love Tyson's charisma.. but Klitschko will wear him down and knock him out.

I want to see Deontay Wilder vs Klitschko
edit on 28-11-2015 by chadderson because: (no reason given)


Did you see him beat that poo talker??
It was nice to see but I am not sure he is ready yet.
Great fighter though.

Klitschko should take it although Fury will be happy to be crossing his path at their respective ages. A year or two ago and Klitschko would have destroyed him. Fury's improved and Kitsch has only gotten older.

Klitsch is still looking the bigger favourite in all UK bookies. Nobody really sees Fury winning and, if he does, the belt isn't in high esteem. Loads of UK money is going on Fury on the off-chance of an upset. Someone has to beat Klitsch and maybe it'll be Fury??

It might even breathe some life into the division if WK is beaten and steps out. The heavyweight division is about as thin and uninteresting as I've ever seen.

It'd be good to see success coming to the UK. I just don't see Fury getting the win.

posted on Nov, 28 2015 @ 02:11 PM
link
Klitschko is by far the better boxer and should win... Tyson makes me laugh though in a cringey kind of way.
Would be nice to see him win and I want him to but can't see it happening.

if he gets by that then you never know but i,d be surprised,its not like he has fought anyone like it before.

He looks in control of the fight so far , Klitschko seems happy to counter.
One good shot will seal it I think.

Fury wins on points , the only real decision as he was the only one there to fight.

originally posted by: gortex
a reply to: sparky31

Fury wins on points , the only real decision as he was the only one there to fight.

got to give him it,he deserved it.

posted on Nov, 28 2015 @ 05:39 PM
link
He did... Klitschko was poor but fairplay to Tyson for bullying and dominating Wlad.
As much as I find Tyson's views disgusting and archaic and think he's a bellend, from a purely boxing perspective then well done Fury. You did yourself and boxing proud.


The Heavyweight division has been garbage for a decade and Vladimir was an awful champion.
Just shows how poor the division has been that he's been up near the top so long.
Vitali was very good in fairness but Wlad just poor.
It was a very poor bout - as most heavyweight contests have been for some time, but you gotta give Fury credit, he had a plan and stuck to it. Nullified Vladimir and out thought and out fought him.
But if these are the two best heavyweight fighters in the world then you know the division sucks!!

posted on Nov, 29 2015 @ 12:50 AM
link
Well done Fury, although as a brit I'm not that impressed with you, yet.
When you can impress me like Tyson did, lennox Lewis did, and even have a go at the best like our Frank Bruno did. Then I will be impressed and 100% behind you. Until you do though, I will reserve judgement on how good you really are. Well done, let's go onwards and upwards from here. Only mildly impressed so far. From a true boxing fan


Dude this is a really sad quote. But I'm on your side here.Fury has yet to excite me, and certainly doesn't look like he's going to be a heavyweight great. I hope he proves is wrong, but he ain't no Mike Tyson, lennox Lewis, or even frank bruno. He's got a lot to live up to. And i really hope he does it. I won't be betting money on him anytime soon though!