Is desalination bad for Carlsbad?

After twelve years of planning and over six years in the state’s permitting process, the Carlsbad Desalination Project has received final approvals from every required regulatory and permitting agency in the state, including the California Coastal Commission, State Lands Commission and Regional Water Quality Control Board. A 30-year Water Purchase Agreement is in place between the San Diego County Water Authority (SDCWA) and Poseidon for the entire output of the plant. Construction on the plant and pipeline is under way and the Project will be delivering water to the businesses and residents in San Diego County late 2015.
carlsbaddesal.com...

A youtuber named Kevin Blanch thinks that desalination will be bad for Carlsbad (quoting from the video below):

Any thoughts on his theory?

Sounds "alarmist"? Sounds like "fear mongering"? Well, I think there are reasons to be alarmed here:

The source of the above information is Woods Hole Oceanographic Institution:

Woods Hole Oceanographic Institution is the world's largest private, non-profit oceanographic research institution and a global leader in the study and exploration of the ocean.
www.whoi.edu...

What's your take on all this? Is it fear mongering for the residents of Carlsbad to be concerned here?

“There is no safe level of radionuclide exposure, whether from food, water or other sources. Period,” said Jeff Patterson, DO, immediate past president of Physicians for Social Responsibility. “Exposure to radionuclides, such as iodine-131 and cesium-137, increases the incidence of cancer. For this reason, every effort must be taken to minimize the radionuclide content in food and water.”
Low Level Radiation: Deadly … Or Harmless?

I'm with Kevin Blanch when it comes to the desalination plant in Carlsbad. I would be getting out of there personally.

originally posted by: Profusion
The graphic below is sourced from: 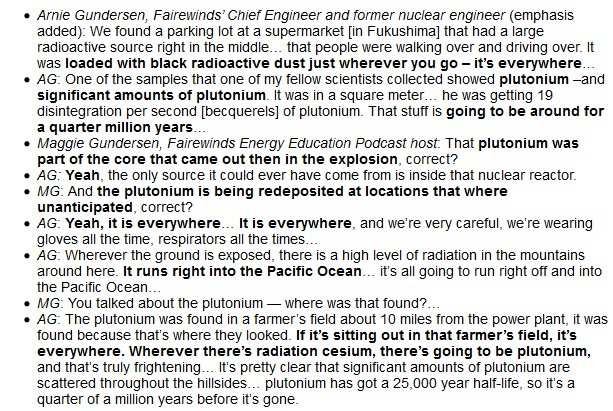 To sum up what the above could mean:

The following map is from the article above. The yellow dots below represent places where cesium-134 was detected. 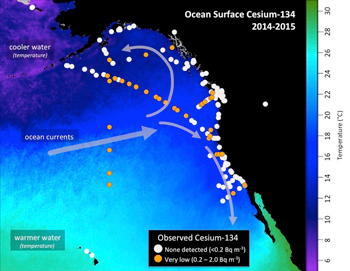 According to the expert's opinion in the article linked to at the top of this post, "Wherever there's radiation cesium, there's going to be plutonium." In case you don't agree with that expert's opinion, please read this: 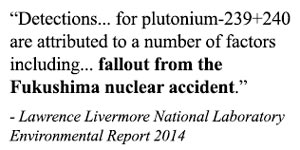 Sorry for the brevity of the above but the report that the information came from seems to be offline at the moment. Also, I'm not linking to ENENews anymore as a source so that's the best I've got. I agree with ENENews' critics now, the site is not impartial and its sometimes deceptive. The information above is a fact and it's documented in many places on the Internet.

If anyone wants to claim that Fukushima Daiichi will be fixed anytime soon: