The Denver Airport Murals: Are they depicting the world right now, or in the near future?

posted on Nov, 1 2015 @ 06:49 AM
link
For most people here, your interest in conspiracy theory has probably lead you down the Denver Airport rabbit hole, and you'll be familiar with the murals and lore that surrounds it. For anyone who isn't familiar, you may want to research, but just looking at the murals will give you enough context to participate in the discussion regarding what exactly they might be depicting.

Let me preface this by saying that the nature of this thread is purely speculative, so feel free to voice your opinion and discuss the possibilities as you like.

Here, you see people mourning the loss of various animals, which maybe serves as a warning against humanities impact on their natural habitats. Right in the middle, the group surrounds what my eyes see to be a snow leopard. Just that same day, I had read this :Snow Leopards at Risk

Some people believe these murals are a stark prediction of our future by one of conspiracies favourite shady organizations, The New World Order. If they are, are they soon to come true? Couple the endangered snow leopard with this mural:

Here we have what I'm interpreting as a flood of migrants or refugees, and a vaguely cultured militant stabbing a dove, the symbol of peace. What's happening in this mural is happening. Right. Now. I don't see anyway to talk myself out of this mural depicting the recent flood of Syrian refugees.

So, could this be the beginning of the New World Order? Did they make a sort of timelined prophecy for themselves, poorly hidden in a major airport?

And then a globalist state of peace after the fall of this vaguely Middle Eastern (sword)/Russian(those elegant shoulder tassels)/US (eagle on the hat) enemy.

What do you think? Are events falling into place according to murals painted 20 years ago?

posted on Nov, 1 2015 @ 07:09 AM
link
The sword in the second picture, the gas-masked solider is wearing, is going right into the rear-end of the dove (which stands for peace probably).

I guess they want to pierce peace in the rear. Or just showing that is what is going on? I don't find it comforting whatever they are trying to depict.

Of course in the third picture the solider is grey and lying dead under the anvil and two peace doves sit on it. And you see the German-looking boy hammering something, probably a reference to this scripture:

(Isaiah 2:4) . . .They will beat their swords into plowshares And their spears into pruning shears. Nation will not lift up sword against nation, Nor will they learn war anymore.

The time of world-wide peace will be accomplished but not by any man-made government. I don't see them showing God's kingdom government doing it either, which it will, by crushing and putting an end to all human governments at Armageddon:

(Daniel 2:44) “In the days of those kings the God of heaven will set up a kingdom that will never be destroyed. And this kingdom will not be passed on to any other people. It will crush and put an end to all these kingdoms, and it alone will stand forever,


(Revelation 16:14, 16) They are, in fact, expressions inspired by demons and they perform signs, and they go out to the kings of the entire inhabited earth, to gather them together to the war of the great day of God the Almighty...And they gathered them together to the place that is called in Hebrew Armageddon.

Then Jesus will rule over all mankind from heaven, and their will only be the one government of peace, no need for lots of different flags and nations. The nations will be no more. And Jesus' kingdom will make God's will done on the earth as in the heaven.

ETA: Apparently the boy is hammering the sword that was up the rear of the peace dove into an implement of peace.
edit on 1-11-2015 by JackReyes because: (no reason given)

posted on Nov, 1 2015 @ 07:19 AM
link
I'm not reading anything into it. It's good artwork but the message is nothing more than the the usual depiction of the sins of man. The kind of message they teach starting in the 5th grade through high school.

I always think of Thr New World order as being secular, but it totally subjective.

I wasn't aware of the scriptures associated with the imagery, thanks for that perspective.

They definitely could be seen as an extension of western moral norms. Personally, I wasn't taught about floods of refugees in grade school.

I always think of Thr New World order as being secular, but it totally subjective.

I wasn't aware of the scriptures associated with the imagery, thanks for that perspective.

There is a statue in front of the United Nations HQ with the exact same quote and imagery: 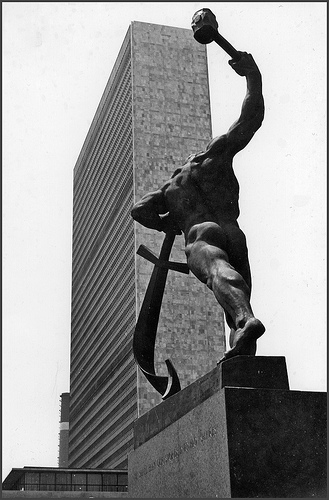 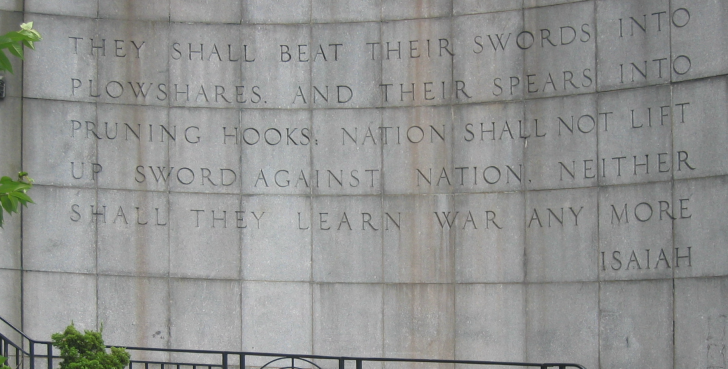 Deforestation, the buffalo head (extinct). The sea turtle, near extinct, ivory, whales, leopards and other big cats… like that first pic. It represents whats been going on, will continue going on.

Slash and burn agriculture, poaching and pollution jn the environment, look at the people crying, look at the color of their skin.

The Fabian Society stained glass window popped into my mind: "Remould it nearer to the heart's desire."

Of course, they are hammering out a new world order in the stained glass window: Fabian Society Stained Glass Window


EDIT: And I've read that the Fabian socialists were deeply involved in the creation of the UN.
edit on 1-11-2015 by MotherMayEye because: (no reason given)

posted on Nov, 1 2015 @ 09:33 AM
link
It was a bad idea giving that Israeli kid all those swords. The bird in the box is interesting as well, if you believe in numbers and abracadabra.

I know and read they been taken down now, and dont exist publicly. One was altered and 2 painted over. No? Anyone seen them lately?

I believe the murals have been removed.

I believe the murals have been removed.

Supposed to have been several years ago!

The sweep of the soldier/whatever's sword is interesting, one part of it is destroying buildings, another part is creating a rainbow effect in the sky. I have seen comments about that...supposedly it is depicting HARRP, as in causing earthquakes and creating pollution/radiation in the sky..stuff that HARRP and the like, is said to be good at.
So are/were these murals whistleblower material, or NWO hidden messages in plain sight, or just plain interpretative?


We'll really never know, will we. Art is always about interpretation, even when it was prooooobably commissioned by a shady organization.

^^ The children of the world, Dream of peace I'.

It had a poem on the lower right hand corner that probably inspired the artist, Tanguma:


I once was a little child
who longed for other worlds.
But I am no more a child
for I have known fear.
I have learned to hate...
How tragic, then, is youth
which lives with enemies,
with gallows ropes.
Yet, I still believe
I only sleep today.
That I'll wake up a child again,
and start to laugh and play."

I think the murals could well represent the past and the present..... similar evils but with different victims...

originally posted by: Atsbhct
a reply to: smurfy


We'll really never know, will we. Art is always about interpretation, even when it was prooooobably commissioned by a shady organization.


And yet the murals very blatantly show(ed) the falling of an old, nation-divided world through disease and military threat, the relocation of refugees, and the rising of a new world with all nations united and forging instruments of 'labor.'

EDIT: Also, the military overlord's face is hidden and the uniform is non specific (he does have an eagle on his hat though). Their identity is hidden.

posted on Nov, 1 2015 @ 01:00 PM
link
I believe many of the paintings have to do with fears of what might come. A lot of it was based off of plights that already happened to peoples.

The mustang statue in particular;

Sadly, Luis Jiménez the sculptor of the statue, was killed by a piece of it that fell on him during the making severing an artery in his leg. It's said to be based off University of Oklahoma mustang statue.

To say it's maybe something more, why so nefarious compared to the original it was supposed to be based off of?
The eyes are red though - see here

couldn't get the pic app to work here.

Below is from the same source

Within the great hall of the DIA is a capstone, commemorating the construction and completion of the project. In the center of the stone is the Masonic symbol of a compass, along with a dedication by the “New World Airport Commission”. Several groups have investigated this organization, and found that it is unique to the DIA. No other airport has been connected with such a group. Of course, this has raised the blood pressure of more than a few conspiracy theorists, who see the connection to the phrase “New World Order”. And of course, the rest of the building does nothing to lessen those worries.


There are mysterious writings on the floor throughout the DIA. One phrase carved into the floor is “DZIT DIT GAII”. This is Navajo for “The Mountain that is White”. There are several other areas on the floor that simply say “Mt. Blanca”. What could this be referencing? Well, one theory is that if the Masons were in charge of the planning of this building (which they clearly were involved given the inscription and symbol on the capstone), then it could be referring to Mt Blanc or White Mountain in France, which is where the Knights Templar signed their charter. Freemasons trace their lineage back to the Knights Templar, so the connection seems to fit. At Mt. Blanc, one Templar wrote, “They gathered to form a New Order”.

To me it is a clear plan in place for decades or longer. Masonic plaque is by design and out of place just as the Georgia Guidestones make no sense. Maybe just showing they (masonic elite) are everywhere and in control. That includes the middle east with the building in Dubai.

Actually kinda scares the bejeezus out of me as I have been hyper fo.cused on this as late

Hm...I just noticed the interesting differences between the dead military overlord and the live one -- namely the eagle on the hat, but there are a few others. When he is living the eagle is bowing down to the left. When he is dead, the eagle is positioned like the Great Seal of the United States --only looking to the left, not right. 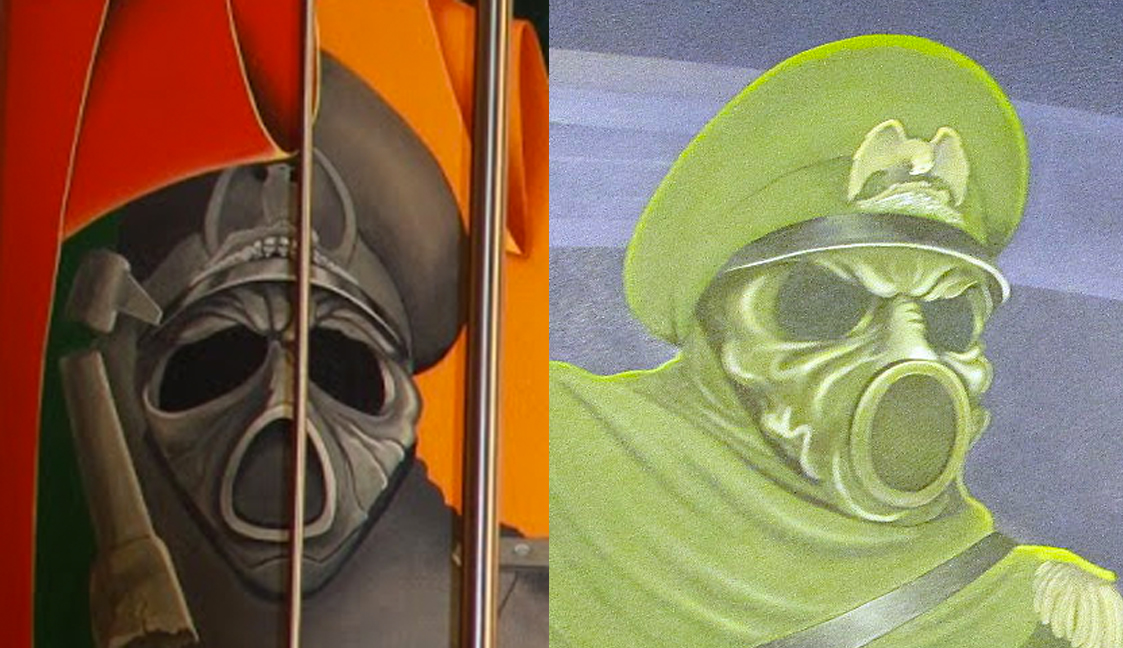 EDIT: Also, clearly the dead one is only a statue.
edit on 1-11-2015 by MotherMayEye because: (no reason given)

Do you think this is a nod to how people actually remember history?
I.e. in life, the US aspect of the militant was actually bowing down to someone else. When remembered with a statue, the US aspect is standing tall, head high.