posted on Oct, 25 2015 @ 09:22 AM
link
So, I've been thinking about Mom and Dad lately (it's the time of year!).
When I was VERY young, we lived in PA. My parents were born in the early 20's. If you do the math...it would seem as if I am 75 years old!
I'm not, LOL.
Anyway, I mention this because Mom grew up in a place called Banks Creek, N.C. She came from a large family and knew how to stretch a dollar!
We were not poor growing up but, my parents were very tight. I can appreciate our lifestyle NOW that I am older.
I have been "revisiting" some old family recipes/traditions and yesterday I asked my BIL (he lives with us) if he had ever had a Hobo.
He said "BEEN a Hobo?". "NO, I say, ATE one?". The perplexing look on his face was priceless and we both chuckled at the faux pas (?)!
So, I immediately googled it and showed him this photo: 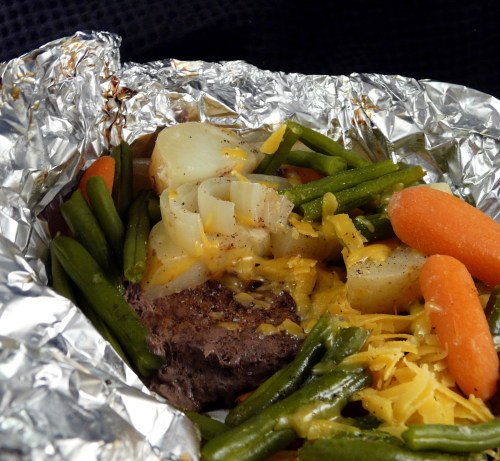 He thought it looked easy and interesting. I remember it being greasy.
I went to the store to buy some ingredients and told my kids what we were having for dinner tonight.
"Ewww" they say.
"Ewww" ?
Maybe, we'll see...
In the winter months Mom would cook Hobos in the fireplace in the coals and that is the way she would do baked potatoes also!
I won't be doing THAT^.
We are a family of THOSE Americans that are sports consumed and I am often looking for something easy and quick so we can get back to the field or the gym or the TV!
Often, I just give up and well the next paragraph explains what happens next...

It's funny to me how today some folks are spoiled (maybe) by the ease of just running out to the local restaurant with Mexican or Italian fare or how convenient Sonic and 5 guys has become! (5 guys not so much if it's lunch time through the week!) This is especially true for my children! Maybe I am fondly longing/remembering the simpler times...

Tonight I will try to make my Hobos with ground beef AND venison to maybe cut back on some calories as well as the fat.
I will add some onion, garlic, and rosemary. Unlike the recipe that was attached to the photo above, I don't think I will use cheese as a garnish on top.
Asparagus is on sale locally and I have some, I'm not sure how it would bake in a foil container. I've roasted it before but that only takes about 15 or 20 minutes. I suppose I could roast it and then add it just at the end...?
I would however like some sort of sauce. Some sort of Aus ju would be a good accompaniment however most Worcestershire and Soy sauces have a higher amount of sodium than I care for. I've had the Lea and Perrins low sodium and it's good, just sort of lacks the body of the regular sauce.
Well, I suppose I've run this topic out!
Wish me luck!


I see potatoes and onions. Count me in!

I've never eaten one of those but, I imagine they are tough!
It doesn't help that my BIL (only 50 yrs old) is nearly deaf...

Makes for some funny responses...when he thinks he knows what you've asked him!

First, you can make your au jus. Buy beef stock (real beef stock, not water and beef cubes mixed like they tend to try to sell). Simmer to reduce to whatever jus you are looking for. I usually reduce by 70-80%, and then add to my raw/seared roast and cover to cook.

We grew up eating these. Called them "Silver Dollars". If we went camping or fishing, this was guaranteed to be on the menu. Ours were usually hamburger, smoked sausage, potato, and some mixed veggies (I hated the kind with lima beans my dad liked). We'd just throw them on top of the fire, and would eat them in the foil pouch.

My wife and i still cook potatoes this way. Dice the taters and wrap them in a foil pouch with butter, salt, and pepper. 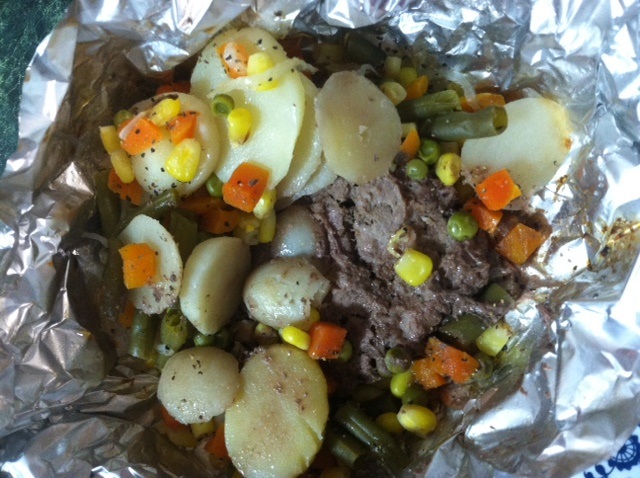 My oldest ate every bite!
My youngest wanted to know why there are so many veggies in it?!
Uhhh...because I am not buying vitamins?! LOL

Anyway, using the deer meat really aided the ground beef in not being as greasy as I remembered...
I got lazy and didn't do a sauce. It wasn't needed after all, so score!
Also took some help from the freezer (with the vegetables).

Ah yes, hobo dinners... you can't go wrong with those !

We used to make them all the time whenever we went out snowmobiling. I usually made ours with chunks of moose meat, spuds, onions, broken chunks of corn on the cob, garlic, and lots of butter and seasonings. The meal cooks in its own sealed-in moisture and juices, so there's no need to add any broth or gravy (unless of course you want to make it more of a stew).

The combination of foods you can toss together are endless.

Wrap it all up tightly in a triple layer of aluminum foil and then you tuck it inside the skidoo engine close to the exhaust/headers.

After an hour of two of bombing around on the sled, your meal will be cooked and ready to eat, piping hot !

Livin' the good life in the Great White North !

I like that idea of cooking it with the engine heat!

Sort of, not really, like when we used to "cook up" hunch punch in a cooler and toss it around in the back of a truck while hunting in Ocala, FL!

Oh...hunch punch...what fun! I think, can't totally remember all of it LOL!

That way lot of aluminium gets into food

Every once in a while though is ok


I've heard about that. Alzheimer's was at the top of the list of the one I read. I try to avoid cooking with it.

I think that it is being shown that Alzheimers may relate to a decreased sleep cycle (which decreases the effectiveness of a secondary vascular system in the brain that is active during sleep cycles, and seems to move waste like beta amyloid out of the brain).

But I have seen aluminum foil and cast iron have statistical links with dementia, too. Not sure which poison to pick, to be honest. I just know I gotta eat. LOL

Me too! AND it was pretty darn good or we were really hungry LOL!

And holy cow (pun intended!) I wanted to relive my childhood where we played outside until dark (don't come home before! LOL), we spit on our cuts and rubbed dirt on 'em, drank after each other (as long as we was kin), shared bath water to save water...LOL THAT's a good one!

I mean heck the kids are going to get hand cancer (is that even a thing?) from their cell phones and we breath in air from the fossil plants and we eat processed meat and we eat monsanto and the darn GMO stuff and ...

NOW I FEEL LIKE CRAP BECAUSE I COOKED DINNER IN ALUMINUM FOIL FOR HUMPTY DUMPTY'S SAKE!!!!!

THAT'S IT!!! we are only eating stuff that we grow hydroponically in filtered water that I personally filter with, oh wait, NO WATER IS SAFE EITHER!!!!

Oh well, we die when we die...let' hope we enjoyed the ride!