page: 1
16
log in
join
share:
IndependentOpinion
+4 more
posted on Sep, 28 2015 @ 10:10 AM
link
This is the very first lunar eclipse I had the privilege of photographing. It was totally awesome. I had to stay up all night to do this, and had much fun. 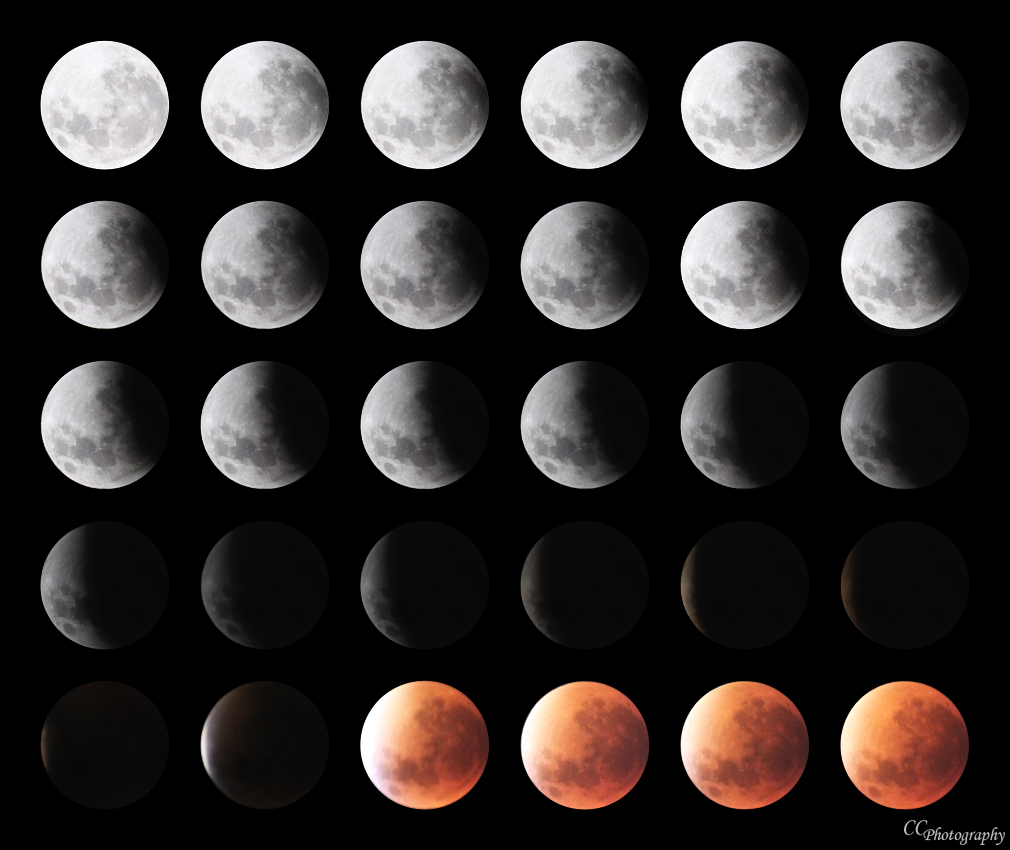 A lunar eclipse (also known as a blood moon) occurs when the Moon passes directly behind the Earth into its umbra (shadow). This can occur only when the sun, Earth and moon are aligned (in "syzygy") exactly, or very closely so, with the Earth in the middle. Hence, a lunar eclipse can occur only the night of a full moon. The type and length of an eclipse depend upon the Moon's location relative to its orbital nodes.

The supermoon phenomenon occurs when the moon is full at its perigee - the closest part of its orbit around Earth (226,000 miles), meaning it appears larger in the sky.

And those lucky to be in North America, South America, West Africa and Western Europe - including Telegraph readers - could also enjoy the blood moon as a total lunar eclipse also occurred.


Now I am in South Africa, and it is the first time this phenomenon is visible for us over here.

Did any of you have the chance to witness this event?

I just hope this thread doesn't get removed because it is so short.
edit on 28-9-2015 by IndependentOpinion because: (no reason given)

posted on Sep, 28 2015 @ 10:14 AM
link
Well done! Very cool. I wish I could have seen it, unfortunately is has been cloudy and raining for about 4 days in Atlanta and we weren't able to view it.

Thats to bad. Atleast you can now see what I saw, and not miss it entirely.

posted on Sep, 28 2015 @ 10:19 AM
link
a reply to: IndependentOpinion
Great job! I actually wanted to see it last night but of course it was cloudy. It never fails. Oh well. At least I can look at your pics.

posted on Sep, 28 2015 @ 10:24 AM
link
Fortunately I was able to see it unobstructed by clouds last night. It really was very surreal.

Side Note: I had to resist telling my Facebook "friends" to STOP POSTING PICTURES OF WHITE DOT'S FROM YOUR DAMNED iPHONES!!!! THEY ALL LOOK THE EXACT SAME!!! LITTLE WHITE DOTS!!!! - end rant

I'm glad you got to see it!

Well done, we got to watch it here in Dallas, glad you posted the photos for anyone who missed it. S&F

South Africa I didn't know it was even visible in the southern Hemisphere.

As far as I know this is the first time that it was visible from our side of the world, don't really know why that is.

As for the upside down view of the moon, I first noticed the "rotation" of the moon after the 2011 China Tsunami. Maybe someone else on ATS can help
edit on 28-9-2015 by IndependentOpinion because: (no reason given)

originally posted by: ChesterJohn
a reply to: wmd_2008 I lived in So East Asia and it looks the same as it does in the US

It looks different from North & South of the equator !

where I was I could view it to the north of us and to the south of us throughout the year because we we were on the equator. It still pretty much looked the same just further south or further north. I have not been that far south so I guess you are correct.