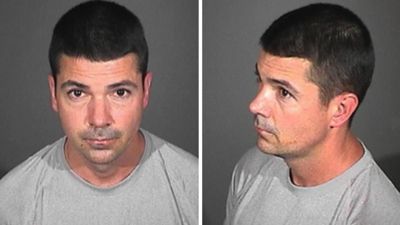 A firefighter from the Los Angeles County Fire Department was taken into custody near an El Monte school hours after a woman was allegedly sexually assaulted in the area on Wednesday, police said.

The victim was walking at about 8:15 a.m. near Portrero School, located at 2611 Portero Ave., when the suspect approached her from behind, grabbed her and then allegedly sexually assaulted her, a news release from the El Monte Police Department stated.
The woman ran away and was able to flag down a male witness. She then notified school officials, who contacted El Monte police.

So basically, this 38 year old L.A. County firefighter was caught sexually assaulting a lady first thing in the morning near a school. It happened at 8:15 in the morning, I wouldn't be surprised if she was walking home after walking her kid to school. So this predator let his victim run away, so he followed suit and ended up fleeing in his truck to the parking lot of the school to wait on police.

They showed up and he was under the influence. They also found handcuffs and a loaded gun. What was he really planning on doing that day? Cheers to the male witness and the victim for running. I think you should always fight back and try to get away. I don't believe in the concept of going along to get along with an abductor/bully.

One thing that jumps out at me reading the story. the firefighter works in L.A. County, yet lives in Moreno Valley. That is about 50 miles away from his home at least. I don't know the reason for that, but I know first hand LEOs around here patrol no where near their home. L.A. cops come out here, and our cops go out there. I live in Mo Val. I think they do it with cops, so they aren't in there same cities. It is easier to control people you don't see out of uniform. This guy thought he could do it in a city he works in but would not be seen out of uniform there.

I'm glad she was able to get away.

It's sad that a person in a position created to help people from danger are the ones causing it in the first place.