page: 1
25
<<   2  3 >>
log in
join
share:
DeviantMortal
+6 more
posted on Aug, 17 2015 @ 06:51 PM
link
Hello, long time lurker with my first contribution. This is the type of content that first drew me to ATS I love it when something has been rediscovered after it has been lost for many years. I wonder if these guys were Mayan or related to them? The statue of a were-panther suggests at least a minor link doesn't it? I hope they get around to excavating the site before looters get to it. Apparently there were two Mayan monkey gods one was the deity of arts while the other was some sort of hero. I wonder if this site was dedicated to one or both of them? Only time will tell I guess. That is if anyone gives these guys the money to go back in.

Try checking for "http/" in twice for the link beginning.

You're a bit late....100's of them have recently been discovered world wide. There are new maps of these using LIDAR...laser guided radar to see through trees and dirt.

That doesn't seem to be the issue. Thanks though.

I know using various satellite tech many things have been discovered but not excavated. That is the part that interests me more.
And I have never heard of LIDAR before thanks, should be an interesting read.
edit on 8/17/15 by DeviantMortal because: (no reason given)

There's a random forward slash after the closing URL tag. Move it to the other side of the tag, then follow it with a closing bracket and a title for the link.

boymonkey74 should get a real kick out of this one.

Cool first post...I've always had an interest in stuff like this.

Your post issue is that you have to first post the name you want to give to your link, and THEN post the link.
On topic: Thank you for this link, I am fascinated, and always have been with pre colombian society.

Thanks, that seemed to do it.

And nice find. I love this kind of stuff.

I believe they have a story at Science Weekly....this year with locations so innaccessable they could never be excavated.

originally posted by: DeviantMortal
Hello, long time lurker with my first contribution. This is the type of content that first drew me to ATS I love it when something has been rediscovered after it has been lost for many years.

Don't mean to rain on your parade, but this info was first (I believe) posted in 2012 here by the venerable Blackmarketeer.

Not saying you can't contribute since several years have gone by and new findings no doubt have been made.

The search function here is not so good so I don't know whether you could have found that thread using the ATS search.

That's the bane of ATS - lots of stuff here already. Maybe you could read that old thread and find some stuff to use as search terms to find out more.

To tell you the truth when I read in this article that was discovered back in `12 I figured someone else had already posted. And I know how bad the search function is LoL. I have been lurking since about the time the Chaplin time traveler was mainstream. That being said I`m glad there is new info at least.

I will look into that soon, getting ready for dinner. I get bored a lot and need that kind of click bait to keep me from playing games all day. :p

Just recently came back from the only developed Mayan site in Homduras: Copan. We were told each city had its own god. The cities were not under central authority like the later Aztecs, but were individual city states like those in ancient Greece. The Mayans seem to have preserved much of their history for the last 1500 years via oral tradition, and the Copan traditions tell of other Mayan city-states not far away. Perhaps this is one.

I`m a little jealous. I want travel and see places like that with my own eyes one day. Still pretty cool info, that means that if my info is right then that site must be only one of the two monkey gods, either the hero or the one based on art.

Here's something to make you more jealous. When we arrived at the main site, there was a building for tourist guides, and we were planning to just go walk around ourselves [wife and I]. But a Mayan guide introduced himself, and we decided to ask him to show us around. It turned out he was raised in a small Mayan village in the mountains, where his grandfather taught him the ancient Mayan history that his grandfather had taught him. Our guide was the one who translated the Mayan inscriptions on the site for the archeologists who got it first excavated. We just listened and listened, asked and asked, and he politely showed us everything and answered every question in detail. He loved his work and it showed. I have not had a better tourist experience that I can recall, and BTW, I am very interested in pre-Columbian civilizations as well. We learned about how he lived as a child, before culture shift. We learned about how the peasants rose up to overthrown the 13th dynasty king. We learned about the inscriptions. We learned about the sports played there - Mayans invented rubber balls and the ancestor of almost all games now. We learned about the excavations and the idiosyncracies of the archeologists. This is never going to happen again, I am sure.

I've been to Chitzen Itza...and back when I went, they still let you climb the big pyramid and go inside it.

I have to say, the casing stones used on the pyramids were very interesting. They looked (to me) as if the Maya had tried to imitate plates of metal: 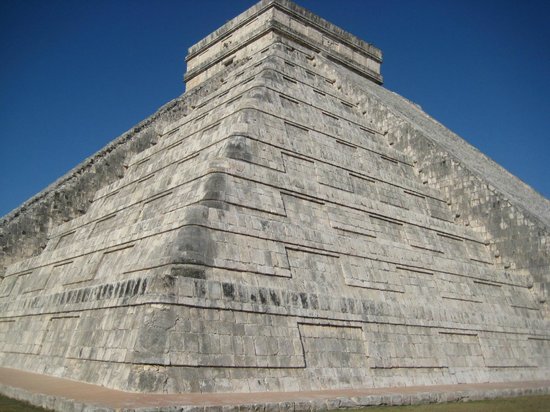 I've been to old historic places in Europe, but Chitzen Itza had some weird energy about it.