Well done Broad .
Any Aussies in? is that the worst you have seen AUS play?.

but lets just say that us brits winning anything is normally considered very unsporting and very un british (since 1776 before the DS peoples start posting pictures of eagles etc)
edit on 6-8-2015 by Maxatoria because: (no reason given)

posted on Aug, 6 2015 @ 04:37 PM
link
That was blitzkrieg cricket. The Aussies started it when they whooped our arses all through the 90s. But it's moved on to another level now. I don't think I've seen anything like it. I have fond memories as a kid of that glorious summer of '81 with Beefy and Bob breaking the Aussies hearts. But this is frantic, pulsating stuff.

At this rate though it'll be over without even disturbing the start of the Premier League on Saturday!
edit on 6/8/15 by mirageman because:

What makes it so especially pleasing is that the Aussies were so confident prior to the series starting and they had dismissed the English team as hopeless- understandably so after our performances under Moores.

The Aussie press reaction to it is priceless;
www.dailymail.co.uk...

But perhaps we shouldn't count our chickens just yet......the Aussies are a tough breed and there may be some life left in them yet, however........

It's time to gloat and gloat beyond anything we have ever dreamt about before!

posted on Aug, 6 2015 @ 05:23 PM
link
Well done Poms,this has been coming for a while players getting paid way beyond their performance and capability levels and pollution of skills via the 20/20 short game and lacklustre performances against mediocre teams.The first time faced with good bowling in quite some time they folded.

This Aussie team is far better than we've seen from them in the main. But we've seen it so many times before when one team gets on top in a test match. I think anyone following this game knew England were going to be batting again around lunchtime.

But it ain't over 'til its over and we've won that little urn.

Gotta love the Aussies sense of humour as well though. 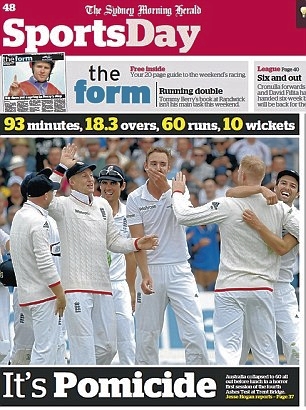 edit on 6/8/15 by mirageman because: spelling

Gotta love the Aussies sense of humour as well though.

Brits and Aussies are probably the only people who see humour in ANY given situation and who both also like ripping the piss out others and themselves at the same time, other nationalities just don't quite get it.

The Barmy Army and English fans in general like to have a bit of a pop at the Aussie players - Mitchell Johnson is the current target of choice - and they all tend to take it in good humour.
Warner has done exactly the same in the past.

And to be fair the Aussies can get very vociferous when The Ashes are held down under.

I imagine players of most other countries would have a bit of a whinge and moan about it.

Another thing I noticed was Aussie fans applauding Broad on his performance - cricket is a bit unique in that respect.
Now I'm entirely sure if that was genuine recognition of a great display or a sarcastic dig at the Aussie batsmen's failings.
But it was all the more surprising given the Aussies attitude towards Broad in the past.

Well as an Englishman and Nottingham native, I'm very proud.