Just a Pinch Tween your Cheek and Gum-An Anasazi Chaw

posted on Aug, 3 2015 @ 09:07 AM
link
Native Americans have likely been using tobacco since the very beginning, but recent work from Antelope Cave, in Arizona, 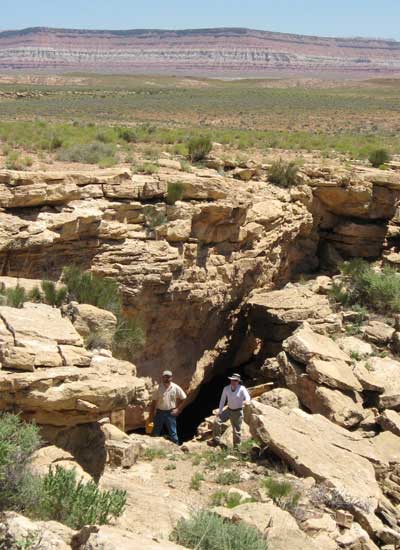 shows that throughout the SW and into CA and TX, native Americans have been chewing tobacco. 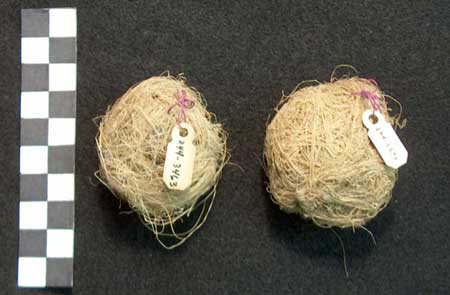 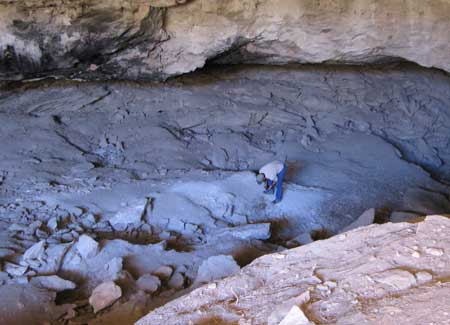 BLM archaeologist Kyle Voyles investigates the midden deposit in Antelope Cave in July 2008. Cast-off trash of the cave’s inhabitants some 1,200 years ago have provided a wealth of information about an early phase of Ancestral Puebloans sometimes referred to as the Virgin Anasazi. (Photo courtesy K. Johnson)

Such chewed bundles, known as quids, have been found throughout the Southwest, from Texas to California, often with teeth marks still visible. But what they contained, and what purpose they served, was uncertain until now.

“As wads of fibers, perhaps they haven’t produced as much excitement as they could have, before we realized ancient folks were actually putting substances inside them,” said Dr. Karen Adams of the Crow Canyon Archaeological Center, who led the new study.

“Before we took this close look, I think prior explanations centered around ancient people sucking on quids during times of food stress, maybe to get some minor amounts of nutrients out of them.

“There have been a host of other suggestions for quid usage, too … such as ‘tea bags,’ dye bundles, and wash pads.”

The Arizona quids were originally excavated in the 1950s from a trash midden at the rear of Antelope Cave, a rocky enclave filled with artifacts left by Ancestral Puebloans over an extended period around 1,200 years ago.

The current line of thought is that tobacco was used for spiritual purposes, but in this case it seems to be recreational.


“We thought even then that some [of the quids] might include tobacco and noted this in the catalog,” he said.

“More than 50 years later, as I began to describe and analyze the quids as part of a broader study of the materials from Antelope Cave, I found that most of the quids in the collection contained tiny plant fragments.

“Not being a botanist, I turned to Karen for help.”

A total of 345 quids had been recovered from the cave, all but one of which were found in its midden of cast-off trash.

This suggested to the archaeologists that the quids were used informally by the cave’s inhabitants, rather than for ceremonial purposes.

Wild tobacco figures heavily in the cultures of many Native Americans and I think tobacco can be used to help determine the movements of ancient people.

What the two recent studies are showing is that these Native American groups are similar, but not particularly related.
What we may be seeing is not evidence of the "one way west to east" movement of people into the new world, but a shadow of people who moved the other way out of America and back into the old world.

A recent thread highlights the combined use of wild tobacco and Datura, at rock art sites in the SW.
www.abovetopsecret.com...
Here is where it gets interesting, both of these plants are absolutely native to North America, yet show up in the old world thousands of years before Age of Exploration. Datura is found in northern India and used by Munda speaking peoples in a ritualistic way. The Munda speakers are a remnant Australasian population, that moved into India in very ancient times, before the Arayans and before the Dravidians.
Not only do the Munda use a native American plant, their creation mythos is a virtual copy of a widespread motif found throughout North America, and possibly has its roots in Cal.
Wild Tobacco and Datura have also been found in NW and western Australia, the common answer as to how they got there is that they arrived on ships from Mexico in the 1870's. The problem with that theory is, they were identified and described by the first European naturalist to explore the interior, in the 1830's, and were found in areas outsiders had never been to yet.
What would be very interesting is to see if the rock art sites in the Kimberly have datura and wild tobacco nearby.
P.S.
Certain Highland New Guineans have been growing tobacco since they driven to the highlands by Austronesian people in the 13th century, where'd that tobacco come from?

Didn't think there was a connection between tobacco and peyote until I read about "peyote hunt".
After a successful hunt, one tribe brings-out tobacco from gourds to thank their spirits.
Read down a ways in link.

posted on Aug, 3 2015 @ 09:13 PM
link
a reply to: Granite
Nice contribution Granite,
I have never made the peyote/tobacco connection, but it makes sense.
Back in the day I used to smoke natural un- cured tobacco, that is now a mainstream product, but after a few water pipe hits , you comuned with the spirits.

posted on Aug, 4 2015 @ 07:22 AM
link
Cool topic! It's difficult to determine what people ate, smoked, chewed, etc. when it comes to plant matter so this is a great find.

It's similar to "momma" here, aka betel nut chewing that is a mix of betel nut, the leaf from the vine (dunno the name) that is the "wad" wrapper, and included is some crushed snail shells (traditionally) or lime powder. In the last recent 100+ years when tobacco was introduced, that is now also included in the chew mix.

It's quite interesting because when you spit the juice, the combination of ingredients makes it look red and stains teeth/gums/lips red too when used a lot.