posted on Jun, 23 2015 @ 08:47 PM
link
In my opinion, the most misunderstood passage and narrative in the Bible is infact the 6 days of God's work in Genesis 1. The mistranslation of Gen 1:2 has been the barrier between cosmology, theology, and eschatology. In this thread, I would like to reintroduce the forgotten Biblical perspective on the beginning of the universe and how it will mirror its destruction. Im only delivering a Biblical outline, I invite you to apply modern scientific observations to this outline.

So here it goes. Gen 1:1-2 " In the beginning, God created the heavens and the earth (big bang, anyone?)...And the earth BECAME formless and void..."

God didnt create a formless mess. I believe God initially created the cosmos for the habitation of the Angelic race, and at some point the fall of Satan and his crew resulted in the destruction of the universe.

How was it destroyed? By a gigantic cosmic flood of water.
Note 2 Peter 3:5-7 "...by the word of God the heavens existed long ago, and the earth (which became formless) was reintegrated out from water and by water, through which THE WORLD AT THAT TIME WAS DESTROYED, BEING FLOODED WITH WATER. But by His word the present heavens and earth are being reserved for fire..."

The above passage is not about Noah's flood, but is about the creation and destruction of the universe before man existed.

Notice the mirroring between Noahs flood and the 2nd Advent's flood of fire. Both are on the global scale. Then, at the end of the Millennium, the universe will be flooded with fire and recreated. Now factor in the water deluge of the entire cosmos, followed by the 6 day recreation.

Next, I'll explain why I believe our Cosmos is a bubble encapsulated in water. 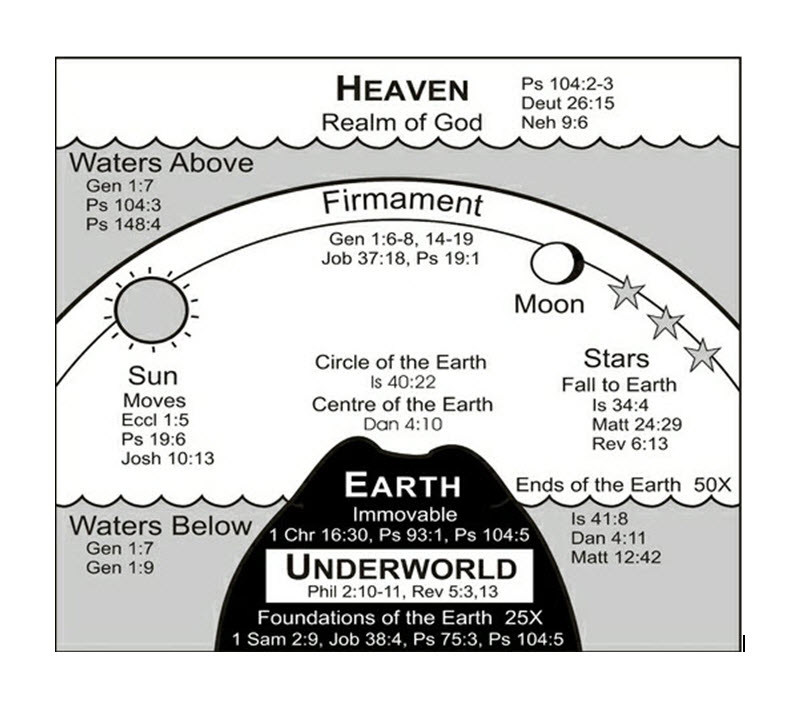 Infact, the only difference between Hashamayim (the heavens) and Hamayim (the waters) is the letter and (imo) secondary perfix, 'shin', which means to shred, chew, separate, devour.

So, it seem that the heaven/hashamayim really means the "separated waters" referenced in Gen1:6.

Thanks for the diagram.

No problem! Thanks for the explanation!

So would you say the universe might be encapsulated with a thick layer of water, h2o, seperating it from heaven?

posted on Jun, 23 2015 @ 10:24 PM
link
If one is to take the scriptures at face value, without the preconceived notions of a spinning, spherical earth that orbits the sun, one would conclude that the scriptures tell of a Geocentric Flat enclosed earth.

Jubilees 2:2
For on the first day He created the heavens which are above and the earth and the waters and all the spirits which serve before Him.

Jubilees 2:8
And on the fourth day He created the sun and the moon and the stars,

Not entirely sure how earth is expected to orbit that which was created AFTER it was.....!

THE MOVEMENT AND MOBILITY OF THE SUN AND THE MOON

The most important biblical quote supporting a geocentric earth can be found in the book of Joshua.

Joshua 10:12-13
Then Yehoshua spoke to יהוה in the day when יהוה gave the Amorites over to the children of Yisra’ĕl, and he said before the eyes of Yisra’ĕl, “Sun, stand still over Gib'on; and moon, in the Valley of Ayalon.”
So the sun stood still, and the moon stopped, till the nation avenged itself upon their enemies. Is this not written in the Book of Yashar? Thus the sun stopped in the midst of the heavens, and did not hasten to go down for an entire day.

It is further supported in Yasher:

Yasher 88:63-64
And when they were smiting, the day was declining toward evening, and Joshua said in the sight of all the people, Sun, stand thou still upon Gibeon, and thou moon in the valley of Ajalon, until the nation shall have revenged itself upon its enemies.
And Elohim hearkened to the voice of Joshua, and the sun stood still in the midst of the heavens, and it stood still six and thirty moments, and the moon also stood still and hastened not to go down a whole day.

Yasher 89:8
The sun and moon stood still in heaven, and thou didst stand in thy wrath against our oppressors and didst command thy judgments over them.

The miracle of Joshua appears again as a reference in the book of Habakkuk.

Habakkuk 3:11
Sun, moon shall stand still in their places. Like light Your arrows fly, Like lightning is Your glittering spear.

The evidence in support of a geocentric model is overwhelming here. Joshua commanded the sun to stand still. He did not order the earth to cease rotating nor did he qualify his statement with the divine knowledge that the sun was merely made to appear stationary. The sun was commanded to stand still because it is the sun that moves.

Psalms 19:4-6
Their line has gone out through all the earth, And their words to the end of the world. In them He set up a tent for the sun,
And it is like a bridegroom coming out of his room, It rejoices like a strong man to run the path.
Its rising is from one end of the heavens, And its circuit to the other end; And naught is hidden from its heat.

These are just a few verses telling us of a flat stationary earth.

So would you say the universe might be encapsulated with a thick layer of water, h2o, seperating it from heaven?


The 'universe' is what 'science' tells us it is.

The stars Sun and Moon are in the firmament, which is between the waters. At least this is my understanding of the matter.

I'm not too sure about the geocentric model. The description in Joshua could simply be an observational account, and our solar system isn't even in the center of the galaxy.

So do you support the 6 day creation theory, or the Gap + 6 day restoration theory?

To be honest, I am not sure which one is the truth here. That 6 days is involved is true, but am not sure about the gap. I suppose it makes sense. It would explain the verse about 'multiply, and replenish the earth'

I'm thinking that Mars may have supported an Angelic civilization sometime during the Gap. All those satellite photos that show what appear to be partially burried structures on the surface could be evidence of flooded ruins. Then you have all that iron oxide on the surface.

I'm thinking that Mars may have supported an Angelic civilization sometime during the Gap. All those satellite photos that show what appear to be partially burried structures on the surface could be evidence of flooded ruins. Then you have all that iron oxide on the surface.

Personally, I am of the mind that those 'satellite photos' of the planets are all just a bunch of CGI pictures.

Math Powerland can explain better than i ever could.

Yes, I've always kept that in the back of my mind as a possibility. It's a shame that we have to be so skeptical of science these days.

posted on Jun, 24 2015 @ 07:14 AM
link
The creation of the universe as it is explain in the bible is up to many interpretation.
Genesis 1:6
And God said, “Let there be a vault between the waters to separate water from water.” 7 So God made the vault and separated the water under the vault from the water above it. And it was so. 8 God called the vault “sky.” And there was evening, and there was morning—the second day.

The "vault" here may represent the creation of the atmosphere. 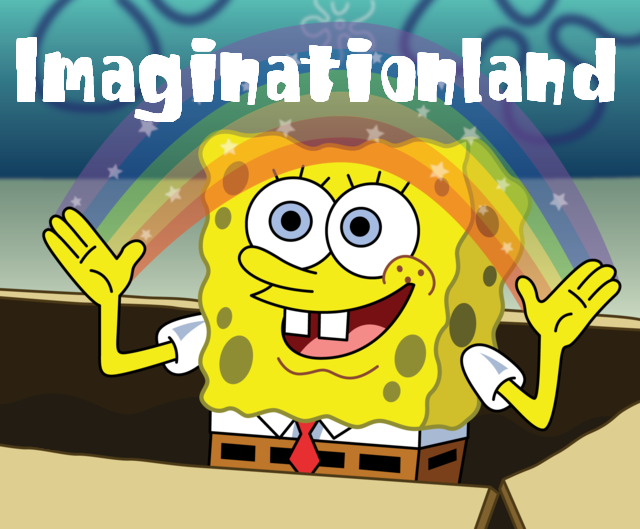 originally posted by: occrest
The 'universe' is what 'science' tells us it is.

You mean what investigations using the scientific method have shown us?.......

The Abyss of Space has always been refered to as an Ocean. Because there are literal currents in space. Drawing mass along it's channels. Creating barriers spacing out other channels and currents from merging.

However, when the Old testament was written it originated from Summarian culture predating only 6000 Years ago.
In 4000BC, The Earth is millions of years old. 4000 years ago people didn't know Germs and viruses exist and thought all ilness was the cause of spiritual possession.

Yes some knowledge from the ancient passed is passed down, All the way to the summarians who then spin it off to reflect their own culture, Which the Jews did the same and so forth to Christianity ect.
Does not mean everything written in the book has to be taken so literally.
Some of it should be taken literally, But not all of it. Because like i said, some of it is knowledge that legitimately is 10,000s years old. But a huge majority of it is crap because it was written by Men 4000 years ago who spoke like this.

You know cuz they didn't have consanents and vowels.
So what they say and how it's translated could be interprited however they want. Usually people who know this yet deny the simplicity of the language don't give examples of this Cavemen type conversations lol. But that's how people wrote. And that's why it can be interprited many many ways. Just the way the Jews decided to read the torah serves their purposes goals.

Like forming the Earth is one thing. Pretty sure it's just humans boasting about the greatness of their creator.
The Universe to me has always existed. And Galaxies Die and are reborn from Water and Fire over and over again.
To me, Where this Galaxy was, Where this planet was because we are all living in the passed following the future to it's inevitable conclusion, Is all predestined to becom destroyed and become nothing. Only For it to become something from seemingly nothing. Since Dark energy is crushed matter but has no magnetic frequency aka Ossilation to effect physical matter in the bonding way so it just fills up every possible empty area of space As if it's the flood waters of Existance.

So since all matter recycles itself through Dark energy and from Dark energy back into fully charged physical matter, There is no big bang. So Everything isn't destroyed at once, Every galaxy isn't made at the same time. We can even see new galaxies forming.

In a big bang, That's pretty much impossible because entropy Depletes energy. To the point that mass becomes invisible because of lack of vibration. Things simply stop ossilating because of depletion, making matter Appear to be only Energy from our perspective. But Matter is just a container for energy to leak out of, All at different rates based on magnetic orientation paired with its chemical and elemental bonding agents.

Don't get me wrong, Humans were 100% created by Intelligent design. I just don't think anything started the Universe because it's just in Endless cycling mode. It's the only thing that contradicts Paradoxs, as the Theory in of itself is Flawless. I'm refering to my theory of course, The big bang tho has as many holes in it as well as the big bang itself lol.

I agree, that much of the bible is symbolic, but it also seems to be evely yoked with literalism, and by no means do I consider any of it crap.

The Sumerian civilization and myths may have existed long before the initial writing of the Pentateuch, but that doesn't make it untrue. It is equally plausible that God chose to wait until the opportune moment to call out Israel as His representatives on earth and stewards of the written truth.
edit on 24-6-2015 by BELIEVERpriest because: typo