Who has the momentum for the 2016 election? 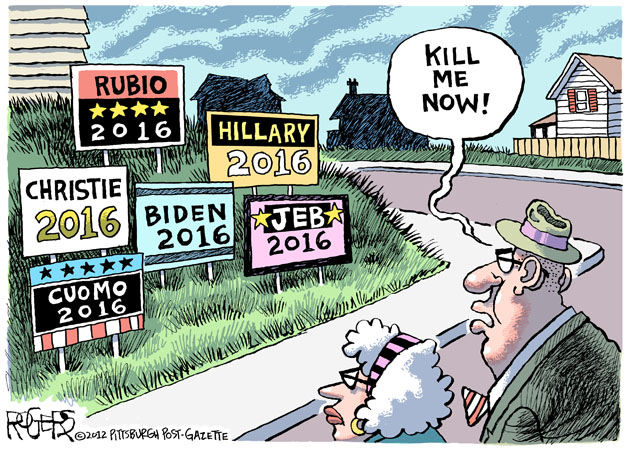 We are 17 months away from the next presidential election

Senate- There will be 10 Democrats and 24 Republicans up for reelection.

House of Representatives- All 435 seats will be up for reelection

Governor- 13 state governorships up for reelection

The Democrats only have a handful of candidates at this time, with Hilary Clinton the clear front runner, however Bernie Sanders does seem to have momentum.

The polls show both Clinton and Sanders leading all Republican candidates right now.

Do Republicans still have the momentum since the 2014 election or do the Democrats? Could 2016 see Independents or Libertarian or another political party gain momentum and win?

Who has the momentum now?

Mostly the NSA. But the FBI and Federal Reserve are close.


Actually I don't think it's a matter of momentum. More like a selection process by the MIC.
edit on 15-6-2015 by olaru12 because: (no reason given)

posted on Jun, 15 2015 @ 02:33 PM
link
Sanders as President with a Republican Congress would keep the wild binge spending in check.

Where is he going to get the money to run a viable campaign to even get the GOP nomination. Politics is about money and if you ain't got it; you ain't got jack.

Bush blows away the competition.

On the Republican side I can see a fight between Bush and Rubio, Bush the experienced establishment choice vs the younger Tea Party favorite. Either way I don't see how they can run on there record and Rubio has a habit of making a complete fool of himself on video. Bush can't run on the actions of his father or brother.

I don't see either one having any momentum, I don't see any large crowd sizes when they speak. Sanders is polling better than both and is drawing large crowds, lots of contributions and volunteers, but Clinton's crowd size the other day was huge compared to all others.

It seems to me at this point in time the Democrats have the momentum.

posted on Jun, 15 2015 @ 04:02 PM
link
The more Obama seems to do the more motivated the Republicans seem to be, but if Obama is now indeed a lame duck president I don't see him doing much till his term ends.

The Republicans are now in control of many state governments and congress and so far since the 2014 election they haven't done much and some of what they have done has blown up in there face. The more they do legislatively the more it will motivate the Democrats.

posted on Jun, 15 2015 @ 04:11 PM
link
a reply to: LDragonFire
Ha, ha...who's got the momentum?
If by momentum you mean forward motion with accelerating velocity, I HAVE THE MOMENTUM! I'm running as far and as fast away from any news coverage or campaign speech making as I possibly can. And I'm damned quick on the remote too I might add.

posted on Jun, 15 2015 @ 04:27 PM
link
The GOP candidate selection is worse than 2012 with the exception of Rand Paul. The democrats aren't much better. Just kind of the SOS as far as candidates go. Bush just announced today so I imagine he will win the GOP nomination. Why I do not know.

originally posted by: kimar
a reply to: LDragonFire

Sanders is the only one that can run on his voting record, he has always been a come from behind underdog so Clinton isn't unstoppable. I do like Rand Paul but I don't think he has a chance.

Anyone's ball game at this point.

Bernie Sanders would make an excellent President. He would actually put the people's interests ahead of the powerful and corporations

How anyone can take what a politician says as' 'gospel'.

originally posted by: xuenchen
I think the "momentum" is with Superball, Silly Putty and Slinky.

Yeah Clinton had the 'momentum' in 2008 until a Senator named Obama came along.

Momentum is not a great metric to judge right now.

posted on Jun, 15 2015 @ 05:14 PM
link
Sanders ups his chances every time he opens his mouth. The problem is the DNC. The DNC is only offering up 4 debates among the candidates. Thousands have signed petitions to increase the number but I have a feeling the DNC won't respond. I think Hillary is a great debater but Bernie is better and his authenticity shines through while so far Hillary is parroting his agenda through a whitewash, head to head it would be so obvious. Bring on the debates!

posted on Jun, 15 2015 @ 10:16 PM
link
a reply to: Kali74
The debates seem to be a issue on both sides this election season. I think it will hurt the Republicans more than Democrats just for the shear numbers of candidates on the Republican side.

It's not what Sanders has said that makes him so popular, although people do like his message. It's what he's done and his voting record that make people trust him. He isn't one of the guys who says one thing and does another. He means what he says and his record of voting shows it. That's why people like him. He's actually honest about his politics.