posted on Jun, 12 2015 @ 10:36 PM
link
The Air Force has released, through the FBO, a proposal for a 30 month development for a high speed strike UAV package. The proposal is for $7.5M, for development. The program will conclude with a flight demonstration. It will be required to design, develop, build, and test a high speed, long range, low cost, limited life vehicle.

To be used to further the cause of freedom, no doubt.

I wonder what their definition of "high speed" is. The description also sounds like they are looking for something they can use in a swarm formation.

It'll be interesting to follow this and see where it leads. I'm curious about what their definition is too.

I wonder what their definition of "high speed" is. The description also sounds like they are looking for something they can use in a swarm formation.

X-51 technology will be used in the High Speed Strike Weapon (HSSW), a Mach 5+ missile planned to enter service in the mid-2020s. 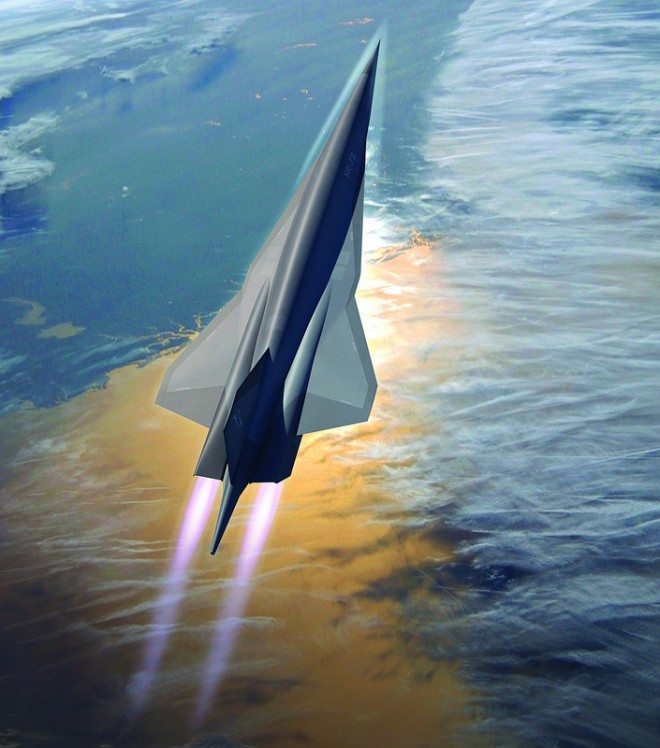 That kind of speed will never make the cost that they're looking at. That's one reason that they haven't developed a Mach 5 bomber. Once you get beyond a certain speed, cost becomes prohibitive.

posted on Jun, 12 2015 @ 11:54 PM
link
This will be the beginning of the end of manned fighter supremacy and the pilots club mafia. Though it will take several decades and include the fielding of SSL's in the mix to come to fruition. If it works then you can expect to see pressure on not just legacy platforms but the F-35 as well, because why would you want to own and sustain a $100M+ fighter with a pilot that will cost north of $10M to train, with all the attendant sustainment costs for both, when you could buy 50-100 of these for the same money?

I expect it will have a supersonic cruise/transit speed with possibly a subsonic loiter as it orbits a predefined area and hunts. If it has a low RCS and can be reused say 5-10 times before it needs to expire then even at say $5 million a round it is actually cheap. Cheaper than today's weapons if you include the fact that if say a current TLAM or JASSM doesn't find its target then it is effectively wasted, and this weapon has the ability to be recovered and reused. My feeling is that they will try and peg the cost in production at between $1.5-2M. It will HAVE to have swarming capability if they want it to survive long enough to succeed against future DEW's defence systems.

This is not a panacea weapon platform for every occasion, it cannot yet hope to do every job currently performed by manned jets, but it is a step in the right direction.

originally posted by: Zaphod58
a reply to: drwire

That kind of speed will never make the cost that they're looking at. That's one reason that they haven't developed a Mach 5 bomber. Once you get beyond a certain speed, cost becomes prohibitive.

I think that they key is "limited life vehicle". Maybe they want a "silver bullet" one mission aicraft.

That's exactly what this is. You may see a Mach 2, or even 2.5 platform, but not much faster than that I'd bet.

at those speeds will not be too vulnerable?. I didnt read "stealth" in required specs.

Not if it's capable of going in low level. By the time it's detected and targeted it's already past the battery and gone.

Won't be X47Bish, nor any airplane with normal flight controls. Custom flight control system is between $12-$14 million from either Moog Aircraft or Parker...no other company can do it.

This seems like phsy-ops RFP to con Russia, China.

Get a asset close enough to launch them in mass and then let them have the connectivity to let them talk to each other and their coordinating assets (maybe even satellites ) to guide them the rest looif the way to their individual targets. Make them stealthy enough so that at supersonic speeds it gets to the target quicker than the target can react.

Although, one day, I'd like to see them make a hypersonic limited strike bomber for when the target absolutely positively has to be destroyed before the Chinese food is delivered and the strike coordination team has to break for lunch.

No, this will have the ability to return if it survives its mission. It probably won't, but if it does, it will be able to return. It will also be able to send data back that a cruise missile can't, such as SAR target data, and other information that we currently get from a UAV.

So basically a probe from star trek. The kind they launched from the photon torpedo launchers. They were basically highly disposable, unmanned, launched Into places not cool to send manned craft. Would probe, do tests, sometimes even blow stuff up. (Photon torpedo = basically a weaponized star trek probe.)

posted on Jun, 13 2015 @ 09:35 AM
link
Either that or they are taking a queue from star wars trade federation and their drone space fighters. Cheap, highly expendable, effective in swarms. I think I said a few months ago in a thread Attack of the Drones.

Now if they could only build a aircraft to manage all these drones while in a battle zone. integrate their collective data, send the intel on to others, tell the drones what to do, like a quarterback. Would be cool if same aircraft also made the battle zone more permissive for said drones, while at the same time hampering enemy connectivity and coordination. Lots of assets need lots of managing. It would be cool if they are also developing a way to manage all these drones. Hypothetically speaking what would one call or name such a aircraft. Quarterback, the godfather, overlord, bossman 1 ???

Call the drones hornets, the aircraft the queen bee, the whole package dropped as a weapon system into the enemy's homeland like a angry hornets nest. Let it wreak havoc for us. Soften them up. Then send in the human crewed stuff once we have a manageable battle zone to safely do so. Keep overloard and her minions around to maintain controll. drones patrolling everywhere. Offering troops on the ground swarms of CAS. A hoard of like guard dogs to chase off any woukd be aggressors into that airspace etc. Maybe like a wolf pack. Or a dogg pound. Call overlord snoop dogg and the drones his dogg pac. a commander orders them to call in "Snoop Dogg" Someones about to get smoked. "Man we about to fade these ISIS mofos, bow wow"
edit on 13-6-2015 by BASSPLYR because: (no reason given)
edit on 13-6-2015 by BASSPLYR because: (no reason given)

posted on Jun, 13 2015 @ 07:54 PM
link
I'd actually enjoy seeing an immune system reference moreso. Fly one of them overhead - your recon drones identify the enemy and the (modular) drones change suite to attack whatever isn't flagged as their own.