page: 1
26
log in
join
share:
ATODASO
+4 more
posted on May, 1 2015 @ 09:28 AM
link
did the apa shift its guidelines so that its members could participate in the bush administration's torture programs? yup. was the apa aware of the #ing disgusting activities of bruce jessen and james mitchell over in the sandbox? yup. but that was back in 2000-whatever, why should you care?

because the apa is the largest professional psychological association in the world, and they set the ethical goalposts. they provide education and networking, and their policies determine who gets licensed to practice. if they condone torture and endorse experimentation in how to harm other humans more effectively, then that becomes the new norm. a norm set by an intelligence agency arm stuck up the backside of a professional association with global clout and a humanitarian image. 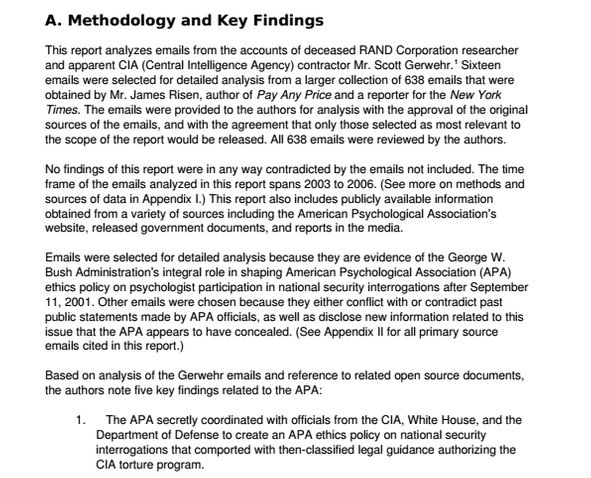 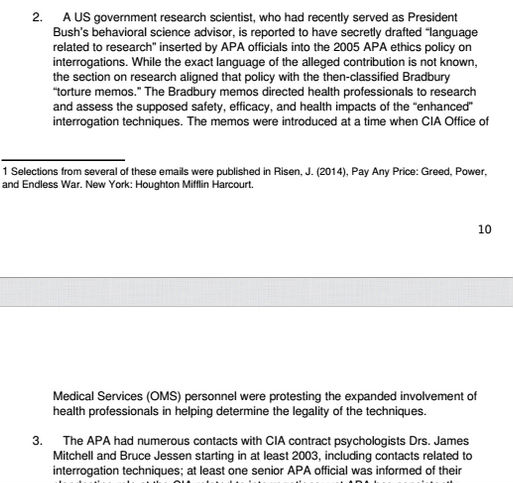 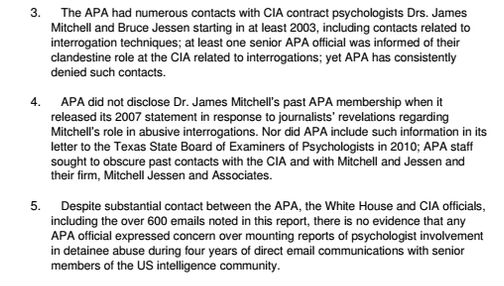 posted on May, 1 2015 @ 09:43 AM
link
This is an important thread.
It's incredible that the APA would change standards to align with political positions. Well, incredible but not surprising. It really isn't modern times, is it? This sounds like the 50s. a reply to: ATODASO

yeah, it gets me wondering. does the cia get to have input on changes to the dsm, too? lol

The report said two Spokane-based psychologists (that would be our boys jessen and mitchell) who helped develop the harsh interrogation program were paid more than $80 million for their work.

This is a window into the psyche of America.

Perhaps, it would be more correct to say this is a
window into the psyche of America Ruling Class.

It is a window into the psyche of the Establishment.

The Hippocratic Oath includes the promise "to abstain from doing harm" (Greek: ἐπὶ δηλήσει δὲ καὶ ἀδικίῃ εἴρξειν) but does not include the precise phrase. Perhaps the closest approximation in the Hippocratic Corpus is in Epidemics:[2] "The physician must ... have two special objects in view with regard to disease, namely, to do good or to do no harm" (book I, sect. 11, trans. Adams)

The the Hippocratic Oath has been abandoned, deserted and forgotten.

Again, this opens a clear window into the psyche of America's Rule Class.

The C.I.A. is just like any other hierarchical pyramid of power,
it allows evil to rise to the top so that the entire structure
become a system of false authority and abuse that undermines
the foundation of Western Culture (liberty principles) for the
insanity of endless war (fear, greed, and corruption).

Jesus said you can not serve two masters, you will either
love one and hate the other. "Man can not serve both
God (ethical oaths) and Money (American Empire).

You know it had a big impact on the DSM and all the new categories of "mental illness" they created with political agendas in mind. Like how conspiracy theorists are delusional and gun rights advocates are dangerous. Pretty much every professional organization is under the sway of politicians and their handlers at the national level. That is the NWO order for you creeping in to control every single last aspect of life.

Combine the OP's article with Obamacare and just think of the implications for detaining millions of Americans based on supposed mental health issues.

I'm sad to report that the infiltration of "establishment' influences within large and important institutions which should be anything but political is almost as common as "commercial product placement" in broadcast TV.

It is almost criminal if one adopts the perspective that any such activity can only diminish the overall service the institution provides to society. But I assure you, having actually done some direct research myself in this subject... the establishment is not just doing this... it's doing it in every major institution they can.

Why? To secure 'continuity' of their ability to be 'unquestionable' due to the 'endorsements' of policy they receive from the compliant and subordinate institution, ...

... the real surprise is how much sociology and social work is under the mind bending control of governments and NGO's... and none of it is about the service to society... it's about 'harmonious' service with the establishment.

Good thread. The APA is a bunch of sophists. What do they care is standards change? There are no quantifiable standards in their profession. They are just looking to push pills.

They know which side the bread is buttered on. Same with other technocrat classes. The fate of the Fascists and the technocrats are tied closely together. They are "all in"

posted on May, 1 2015 @ 06:33 PM
link
Not surprising, really confirmation of hierarchical structures informing each other for the purpose of objective, strategic, control, effectively feeding and creating a bubble for the top of the pyramid.
edit on 1-5-2015 by theabsolutetruth because: (no reason given)

originally posted by: theabsolutetruth
Not surprising, really confirmation of hierarchical structures informing each other for the purpose of objective, strategic, control, effectively feeding and creating a bubble for the top of the pyramid.

It seems totally appropriate to the "Comin' at you sideways." strategy they employ, I agree.

Here we have a continuous feedback loop between those who record (for science) and prescribe (for profit.) It is currently politically unavoidable fault in the current system we bear as a yoke. Positions within the system are 'peddled' to 'contributors' of political campaigns... net result: rampant consumer dependence on credit so survive.

Sadly, the government now mandates every citizen to engage with private business for profit business - because they say so... would have been seen as an alarming deviation from 'free' market just a century ago. But our masters crafted a new revenue stream right before our very eyes.... Hooray ... we made history.