she found her voice...NOW WHAT lol

posted on Apr, 30 2015 @ 07:31 PM
link
almost 9 years ago I rescued a puppy from a horrific situation she had been spayed at 2 months with no antibiotics and when i found her she had so much infection and swelling her tummy dragged the ground with blood trails. I had an animal rescue back then funded soley by me and my family money. after months of surgeries with weeks in between to allow healing of this and that she was finally a healthy dog of 6 months and unlike many of our other rescues had become a part of our family. During these surgeries and even long after she never whined, whimpered or groaned, NOT A PEEP i tell you. not even when she was clearly in serious pain.

So as time went on I checked with her vet who told me her voice should be fine and maybe it was merely the emotional trauma she endured that she remained silent. I tried everything. One of my rescues was a talker so I worked with her and him together to get her to bark and even fake broke into my house a few times so she could learn the other dogs barked and protected the house and they got rewarded. But to no avail she never made a sound, not a groan not a grumble not even a burp or a fart could be heard coming from the lass.

One night after being out drinking at a dinner with friends I had gotten a ride home to avoid a dui, however i neglected to get my keys back from my friends at the restaurant. By this time my rescued pup had grown to a healthy (still quiet) 1 & 1/2 year old gal. One my vet said was worthy of champion bloodlines evidently- oh he loved it when she came in for check ups. During the last year I had to stop rescuing animals as family money was running out and even my two jobs couldn't support that many vet bills etc so I had by then thinned the heard down to just the family pets, her being one of them.

So here i was breaking into my own house on a dark evening when all the neighborhood was quiet. Mind you I only had three dogs left at that point. One mute girl, one 16 yr old boy with a booming voice and a little chihuahua so you can imagine my shock when I heard TWO BOOMING barks on the other side of my door.

At first I thought someone thought i still did rescues and must have brought by another dog, and when I went inside it was just my same three, my big boy, my mute girl and the little yapper chester. To my dismay I couldn't figure it out, so I figured I must be drunk and went to bed.
Then next day my bf at the time came over and wow RARARARARUFF she roared! I was so proud I praised her and gave her treats and forgot my bf was at the door outside lol

So that was 8 years ago roughly and here's the problem- she won't shush now. She talks more than I do. a moan here a grumble there and whine a whimper a groan and a growl. She has found her voice and at times it is annoying cause she's difficult when i am on the phone and she is trying to communicate with me. she tells me when its time to fill bowls, go outside pet her, give her treats, she even is vocal about her jealousy when someone else gets pets. I know work with her and she can say I love you and she has a distinct 4 syllable I want outside which my hubby finds hilarious.

So she found her voice and I have a dog that is vocal more than most people. She is my shadow and my best friend and I can proudly say Im not crazy yes my dog talks back lol

Just as you did your avatar

She sounds like a cool dog.
I don't know how to do screen shots so I'll try to talk you through this. First go to the v symbol that's to the right of the log in/out button. A drop down menu will appear. Click on the upload button. It looks like a cloud with an up arrow in the middle. It's between "complain" and "live". It'll take you to the upload page. Click the upload symbol (cloud with arrow). Click "Select files". A window will open up showing your pics. Click the pic you want. Click upload. Now, to post a pic: A window will appear with the pic you uploaded in it. Below are three sets of numbers. You want the top one that says "BBC code for use in posts". Highlight that code, including the "[pic]" part. Copy and paste in the posting window. I hope that helps.

You beat me to it while I was typing lol. Good one. Much shorter and easier than what I was saying.

What breed is she? My avatar dog "talks" all the time, in many ways. It's his breed and personality.


Our little rescue started out with a tough life , first with a family that cared so much for her that when she developed a respiratory infection that they dumped her at the pound instead of paying $25 for the meds . She then sat in the pound for the max time and due to be put down . I guess it was fate (call it what you will) that the wife and I stopped in there to look for a little dog for the wife's father . After a phone call to him , he stated he no longer wanted a dog .

So we decided to leave . As we were walking out , we were passing a small section of kennels that seemed empty so I took a few more steps , then stopped , turned around and walked into that small room of kennels . All the kennels I looked into were empty , but I kept looking into them and the last one had a small Shih Tzu/Terrier mix sitting back in the corner with her head down . I knelt down and stuck my fingers in the cage , she slowly walked over with her tail between her legs , sniffed my fingers and slowly walked back into the back corner .

The wife and the shelter employee were standing there and I looked at the tag on her cage , there was a date with a red X . I tapped and said to the employee "That's the day she is to be put down , correct?" he said "Yes" . It was to be the next morning . The wife left in tears .... i asked him what the adoption fee was to which he answered $50.00 . Looked in my wallet , I was shy $15 and told him I would be right back . He steps around me , opens the gate , carries her out to the wife and says "Give her a good home please .This is her that very day ... 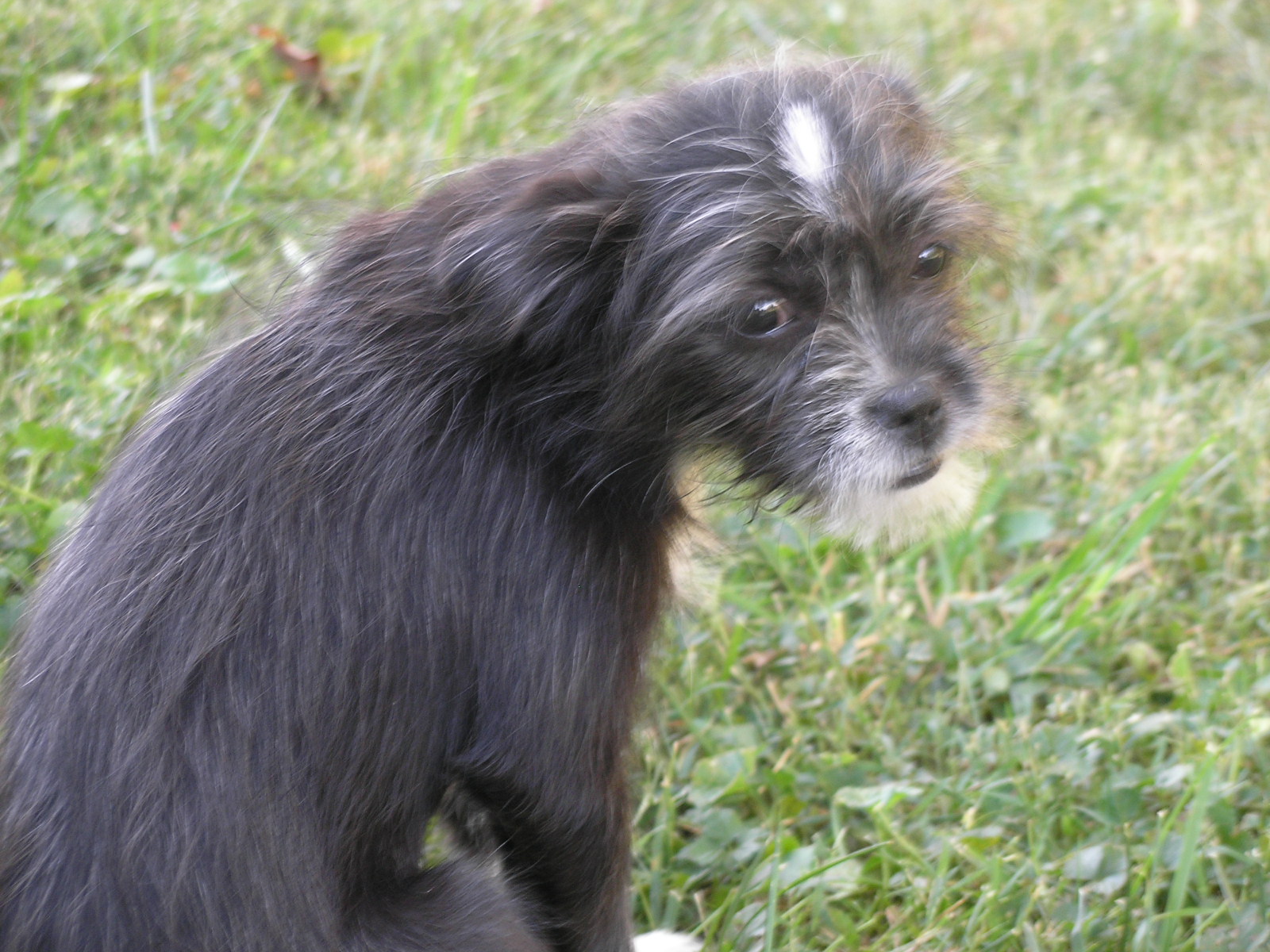 As I said Fate , call it what ever you will , but something made me stop and walk back into that room or I would have left and she would have been put down . She is spoiled rotten now , by the way . But to get to the gist of my story . She would not bark , not make a peep . for about the first year . Then one day the wife and I came home from a day out , as we walked in the door she barked , whined and made noises I didn't think a dog could make . And when she found her voice , she didn't stop LOL . She now talks to me all the time and that's exactly what I say "Talk to me !" and she will bark and when I want her to quit barking I just "Enough" . She , like my Parsons Russell , knows hand signals for most commands but speaking was one hand signal she never mastered so it has to be voice . It just takes time to train them .

I posted a pic of her in the other thread I started , but I will post again . Before and after ... 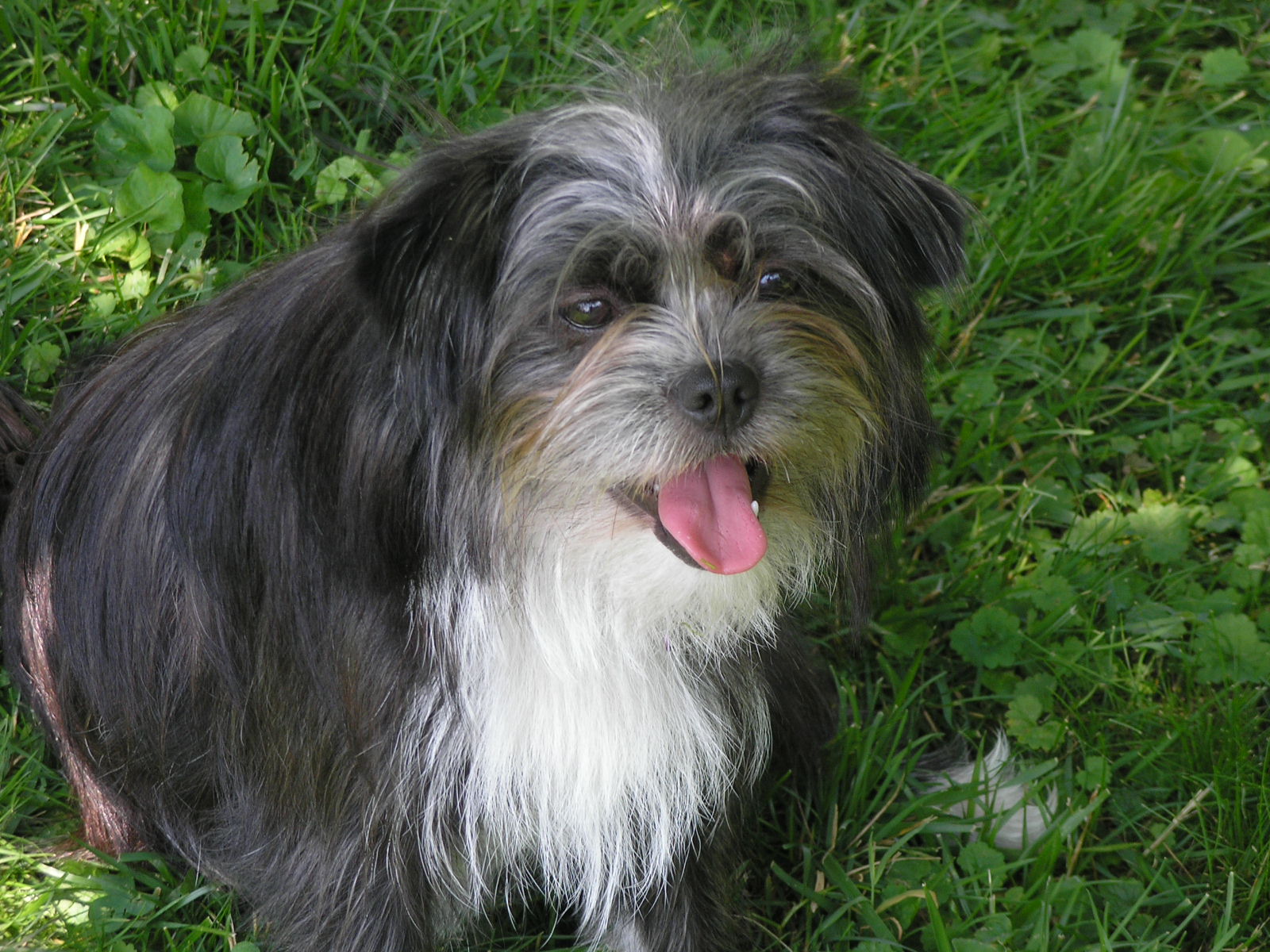 posted on May, 2 2015 @ 06:22 PM
link
my upload tabs do not work as my internet is too slow evidently to recognize it. oh well it will have to wait until i am near a mcdonalds or starbucks in the city i guess.

originally posted by: Thisisfun2015
my upload tabs do not work as my internet is too slow evidently to recognize it. oh well it will have to wait until i am near a mcdonalds or starbucks in the city i guess.

You are very welcome .

For the first year , my wife asked if something was wrong with Izzy (her nickname) because she would not bark . I told her to give it time , she will find her place in the home .

It's actually funny , when we were dating my wife said she did not like nor would she allow dogs in the house and did not care for dogs . I told her that would be a deal breaker on our marriage plans . Now 20 years later , even though I am the feeder , groomer , giver of treats , taxi cab driver to the vet , trainer etc; etc; , the wife could not imagine her life without them and is the one that receives all the love when she comes home . All I get is a half a$$ , lazy tail wag when I come home !!!
edit on 4-5-2015 by Stonecutter45 because: (no reason given)