Iraq's Rambo - The Angel of Death

posted on Apr, 26 2015 @ 11:52 AM
link
I am just curious what ATS thinks about Abu Azreal? He is a person who has reached rock star status in Iraq due to his fight against ISIS. During a recent funeral, just his presence nearly disrupted the proceedings due to his popularity with the people. He has a presence on facebook, with over 300 thousand "likes" his own Wiki page and appears to be no stranger to social media in all its forums.


The men push forward, smartphones flying back and forth as they enlist whoever is closest to take their photo with the swarthy figure at the front of the crowd.

When it's the next man's turn, he approaches with reverence, planting a kiss on the cheek or forehead of the muscle-bound man with the shaved head and jet-black bushy beard. An awkward pose, a quick snap, and it's on to the next acolyte, already in place.

Who is worthy of such attention? A movie star? A chart-topping singer?

Nope. He's Iraq's most famous Shiite militiaman, a fierce warrior whose nom de guerre — Abu Azrael — is an archangel of death in Islam. But the 37-year-old has another nickname: the "Iraqi Rambo." 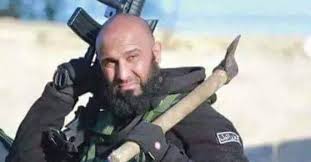 They say he is just as at home fighting with an axe or a sword as he is using a gun, and that he has ISIS running scared...

So, what do people think of him? His background is unknown, and suddenly he has reached this popularity that is tremendous to say the least... What is everyone's opinion of this man?

Well he may be a spiritual brother of this guy

in that he is fighting against ISIS.. yes
edit on 26-4-2015 by OpinionatedB because: (no reason given)

It helps to inspire courage in others.

I don't don't the guy is probably a double hard bar steward, but this does seem to me to be a form of propaganda that the Iraqi's are using to bolster morale - and it seems to be working, so fair play!

It reminds me of the story of Captain America, come to think of it.

originally posted by: OpinionatedB
a reply to: hotel1

in that he is fighting against ISIS.. yes

That's ok then because affiliations never change and bite you in the ass, do they?
edit on 26-4-2015 by hotel1 because: (no reason given)

He is trained for modern urban warfare and his legacy stems from his capability in this regard .

He is a member of Imam ali brigade , which is armed with Iranian-made UCAVs and ATGMs . They are one of the most capable brigades fighting ISIS right now .

I had not known where he was trained..

I have a question, is he Iranian, or is he Iraqi? What region is he from... in other words..

originally posted by: OpinionatedB
a reply to: haman10

I had not known where he was trained..

I have a question, is he Iranian, or is he Iraqi? What region is he from... in other words..

Iraqi shia muslims and Iranians are very close and i mean really close .

Oh I knew that about the closeness...

I was just curious.. not many iraqi's know persian well enough to sing in it though..

Farsi is a difficult language for many.. I was thinking perhaps a father or a mother may have been Iranian..
edit on 26-4-2015 by OpinionatedB because: (no reason given)

Well , due to the fact that many Iranians visit Iraq - on a daily basis - for Iraq's shrines , many Iraqis specially shop-owners know some Farsi .

But in general the number of Iraqi people who know farsi is not very significant . this goes the other way too .

This guy knows some farsi , but his accent is terrible TBH . maybe he learned Farsi when he was stationed in Iran .

here is a video of him speaking farsi :

Anyone who battles ISIS is A OKAY in my book! May he be protected fighting the good fight!

Love the axe, reminds me of a dwarf warrior with it and that beard!

i know its not quite right, but its all very Zohan/Phantom

originally posted by: OpinionatedB
a reply to: haman10

I was thinking of making a thread for introducing different Forces who are fighting ISIS now in Iraq and elsewhere .

but it deems not necessary since it concerns no one outside of ME .

posted on Apr, 26 2015 @ 12:43 PM
link
There is a Guy who walks by my house twice a day to go to the local Mosque, he's huge...i'm talking nearly 7' tall and built like a brick outhouse..if he ever goes full tonto jihad in and around my area i'll be clearing out.

Back on topic, yeah i read about that guy a while back. I wonder if he'll be in for some special attention from IS. Looks like a proper old school warrior...The Bear Jew..eh...Muslim.

Human worship disgusts me to no end.

He wont give much by way of background on himself because he has special attention.. got it I think when he started being a thorn in their side..according to him he wants to protect his family, so he wont give his name..

average iraqi is not what is written all over him.. but.. it could be a lot of PR for morale.. or it could all be true..
edit on 26-4-2015 by OpinionatedB because: (no reason given)

not effecting us doesn't mean its not interesting..