Scientists with the U.S. Department of Energy (DOE)'s Lawrence Berkeley National Laboratory (Berkeley Lab) and the University of California (UC) Berkeley have created a hybrid system of semiconducting nanowires and bacteria that mimics the natural photosynthetic process by which plants use the energy in sunlight to synthesize carbohydrates from carbon dioxide and water. However, this new artificial photosynthetic system synthesizes the combination of carbon dioxide and water into acetate, the most common building block today for biosynthesis.

They call it "nanowire/bacteria hybrid technology". The entire system is made of biocompatable light-capturing nanowires that artificially convert the sun's energy into electrons that can directly interact with specific microbial systems, also using the same nanowires. 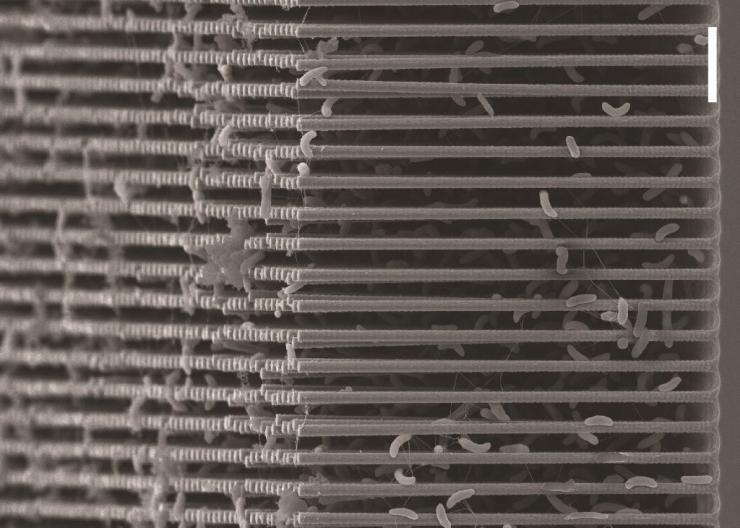 
Direct solar-powered production of value-added chemicals from CO2 and H2O, a process that mimics natural photosynthesis, is of fundamental and practical interest. In natural photosynthesis, CO2 is first reduced to common biochemical building blocks using solar energy, which are subsequently used for the synthesis of the complex mixture of molecular products that form biomass. Here we report an artificial photosynthetic scheme that functions via a similar two-step process by developing a biocompatible light-capturing nanowire array that enables a direct interface with microbial systems. As a proof of principle, we demonstrate that a hybrid semiconductor nanowire–bacteria system can reduce CO2 at neutral pH to a wide array of chemical targets, such as fuels, polymers, and complex pharmaceutical precursors, using only solar energy input. The high-surface-area silicon nanowire array harvests light energy to provide reducing equivalents to the anaerobic bacterium, Sporomusa ovata, for the photoelectrochemical production of acetic acid under aerobic conditions (21% O2) with low overpotential (η < 200 mV), high Faradaic efficiency (up to 90%), and long-term stability (up to 200 h). The resulting acetate (∼6 g/L) can be activated to acetyl coenzyme A (acetyl-CoA) by genetically engineered Escherichia coli and used as a building block for a variety of value-added chemicals, such as n-butanol, polyhydroxybutyrate (PHB) polymer, and three different isoprenoid natural products. As such, interfacing biocompatible solid-state nanodevices with living systems provides a starting point for developing a programmable system of chemical synthesis entirely powered by sunlight.


The weather and time of day wouldnt matter with a back-up lighting system. Under artificial sunlight, scientists were able to achieve a conversion efficiency of up to 0.38% per 200 hours of light, which they say is roughly the same as your average leaf.

They are currently working on a new system that will increase efficiency to 3% and even higher in the future. Here is a bit more about the setup... 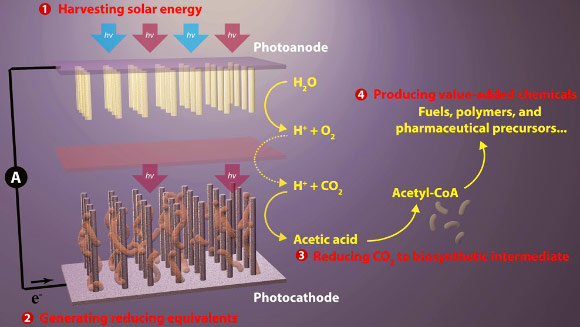 The system starts with an ‘artificial forest’ of nanowire heterostructures, consisting of silicon and titanium oxide nanowires.

Once the forest is established, it is populated with populations of Sporomusa ovata (an anaerobic bacterium that readily accepts electrons directly from the surrounding environment and uses them to reduce carbon dioxide) that produce enzymes known to selectively catalyze the reduction of carbon dioxide.

Once the carbon dioxide has been reduced by S. ovata to acetate or some other intermediate, genetically engineered Escherichia coli bacteria are used to synthesize targeted chemical products.


Anything that reduces emissions is great, but what else could this technology help us do? How about a setup in the desert that operates and charges batteries during the day to provide artificial light when there is bad weather or darkness?

Plastics are a huge problem that plague this planet and finding an easier way to develop a biodegradable replacement will help. Recycling plastic is great, but still uses a significant amount of energy during the renewal process.

The yields of target chemical molecules produced from the acetate were also encouraging – as high as 26-percent for butanol, a fuel comparable to gasoline, 25-percent for amorphadiene, a precursor to the antimaleria drug artemisinin, and 52-percent for the renewable and biodegradable plastic PHB.


Fuel, drugs and biodegradable plastic, not too shabby. Our dependency never ends and the only other choice is to stand in place or develop a better, more forgiving technology. Panasonic had a previous breakthrough a few years ago and I thought I should give them credit.

Osaka, Japan - Panasonic has developed an artificial photosynthesis system which converts carbon dioxide (CO2) to organic materials by illuminating with sunlight at a world's top efficiency*1 of 0.2%. The efficiency is on a comparable level with real plants used for biomass energy. The key to the system is the application of a nitride semiconductor which makes the system simple and efficient. This development will be a foundation for the realization of a system for capturing and converting wasted carbon dioxide from incinerators, power plants or industrial activities. 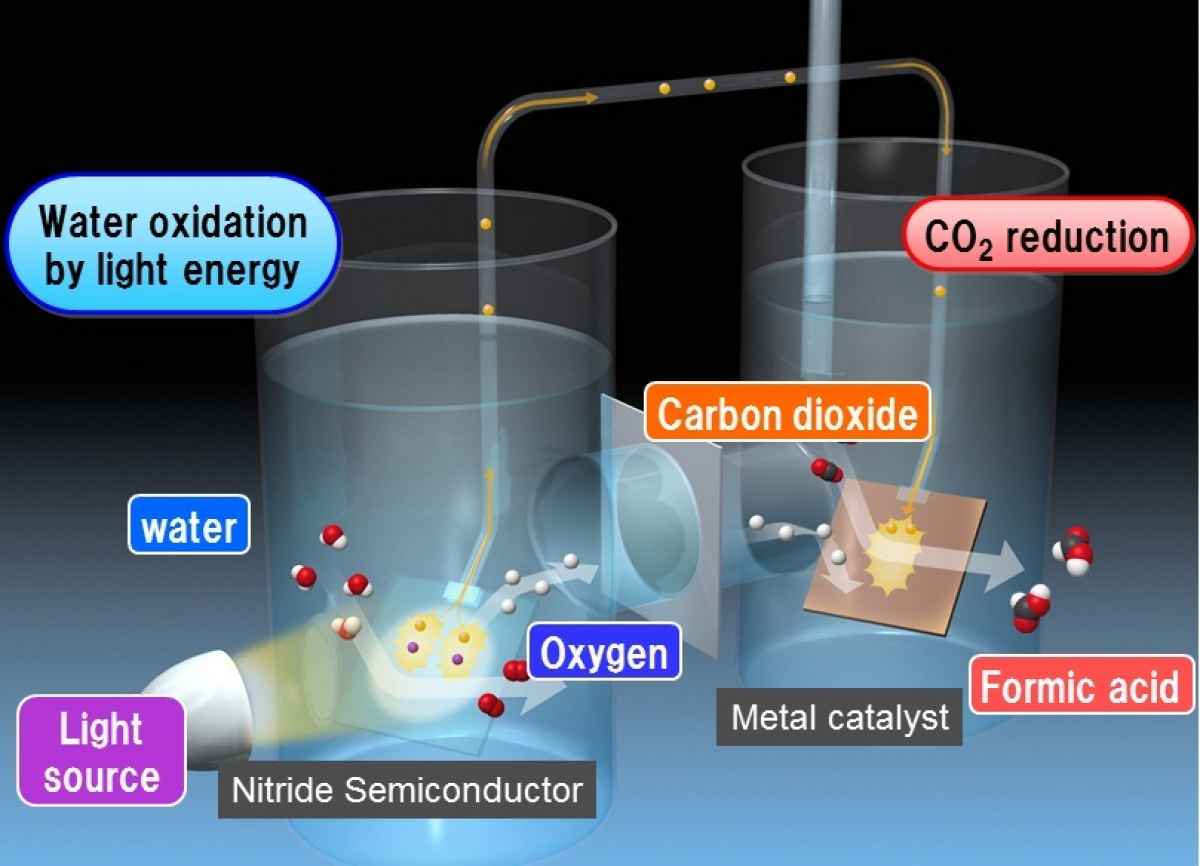 “Once we can reach a conversion efficiency of 10-percent in a cost effective manner, the technology should be commercially viable,” Dr Yang said.


I though about little personal oxygen generators for the home or to create enough fuel to drive your car around town with a rooftop system. I'm still curious how large this thing would have to be for practical use. How can you see this benefiting mankind?

Artificial photosynthesis has been under strenuous research for a very long time.

I will look into this further, but it looks like they have something going here.

posted on Apr, 17 2015 @ 07:02 PM
link
More research needs to be done on the impacts this technology will have on the current natural state of things.

Lets not repeat the same mistakes by being hasty and releasing something that we cannot take back. I admit we need something like this to make amends with our smoggy present/past.

Sounds promising, as my father always said when it sounds to good to be true there is a catch. Is there a catch?

I hope this is what it is and will have small and manageable downfalls.

We need to weigh the pros and cons and study the impacts once this is used on a scale of millions or even billions. I am aware that my post does have an alarmist tone to it and that this breakthrough looks only positive, but can we really afford to make another mistake?

Lets be patient, poised and vigilant.