US Failure and The Brutal Nemtsov Murder

posted on Mar, 6 2015 @ 07:04 PM
link
I just can't that's so stupid, I'm sorry to say but this was another pathetic attempt by you know who to start an uprising in Russia. Killing one of Putin's oppositions is the biggest cry out for being so bloody obvious, Russia already formed an anti uprising committee and groups from the general population. People in Russia will never let a civil war occur like the ones done by the states and a select few in Ukraine, Egypt, Libya, Syria, Iraq with ISIS now etc.

America is really going for the whole repeat of the same gameplay over and over again. This is pathetic we spend so much money and investing so much into intelligence and security. They can't come up with any other way to start a revolution then the same old "Sacrificial Lamb".

Also one of Nemtsov close friends said in an interview who knew him very well, that this was most likely done by someone in his inner circle to put forward the agenda of a Maidan in Russia. Another factor most of the bullsh*t broadcasts like Fox,CNN and BBC 50% of the time give false translation of a native Russian interview. I am not defending Russia here they too do translate a portion as well roughly 60%-75% leaving a good 15%-40% not translated.

I tell you now I studied Russian and I am quiet fluent and the truth is that, major news outlets in the States only translate that which they want us to hear.

The question we should be asking is this - If an uprising is successful in Russia by the US, then What occurs when Russia's back up launch system kicks in?

The new Russian missile tests have been shown to go through any ICBM system with ease and to top it off Russia has launched a new ICBM system, which will take out most of our missiles before they get close to the borders.

1. Our government is fully aware and just wants a war to write off the debt and start fresh.

2. We are spending money on nothing basically and no work is being done to counter Russia's latest strange jump in technology.

3.Our government went full rtar and does not realize that Russia has gained more ground with Sanctions then before. Basically we are motivating them to move forward and unite against a common enemy us!

I fought a rat before and when you corner a rat it will attack you and fight back. Same can be applied to Russia through the Napoleon Campaign (Where they burned down the Capital), WW1 where Russia gave Germany a beating (However, they failed due to the 5th mile which was consisted of criminals, murderers, rapists,thieves etc that caused the revolution) and WW2 where Russia was cornered all the way to Moscow and then the people banded together, including the brilliant Strategy by several of the Generals which allowed Russia to push Germany all the way to Berlin.

I am not implying Russia is a rat, I am merely implying what kind of idiot would try to corner 1 of the 3 biggest powers and think they can win. When History clearly shows and repeats itself that Russia can not be conquered by power and stupid tactics alone.

In my eyes The Brutal Nemtsov Murder was nothing but a failure and pathetic attempt which looks like many other similar attempts that were set in motion During the Arab Spring and The Kiev Maidan Revolution. A lamb has been sacrificed(As ALWAYS!!) and now as always we going to see anti-government rallies and protests blaming Putin for Nemtsov murder.

I think that the US needs to finally realize that Russia is not the same Russia of the 1990's and early 2000's, I do have to give it to Putin for playing the game so calmly. Also he Vladimir Vladimirovich did hint that, if push comes to shove Russia will have no other option then to launch a counter attack against the US if such childish acts continue. He also stated in one of his latest interviews that US is known for killing of their citizens for pushing the agenda of invading foreign states.

Including some sort of evidence that will be released to the world regarding 9/11. I am actually interested to see this evidence and want it released maybe we will get some light on what truly happened that day.
edit on 6-3-2015 by ViciLaw because: (no reason given) 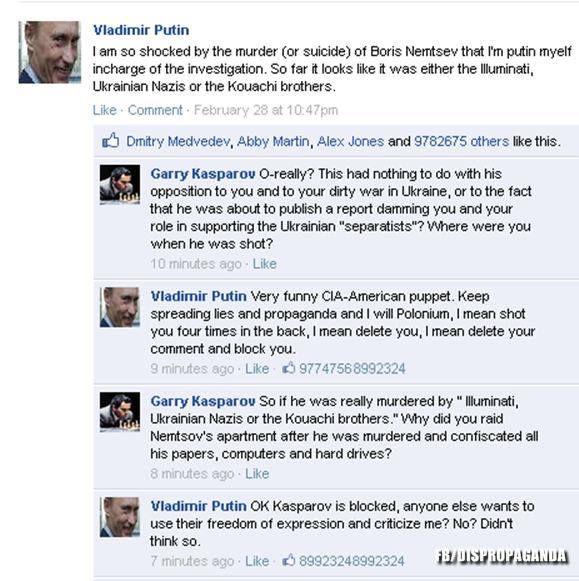 posted on Mar, 6 2015 @ 07:11 PM
link
Get ready man, because there are going to be some serious flames headed your way. There will be the typical US supporters wrapped in the American flag in here to tell you how wrong you are, and there couldn't possibly have been any outside involvement.
edit on 3/6/2015 by SpaDe_ because: (no reason given)

originally posted by: SpaDe_
Get ready man, because there are going to be some serious flames headed your way. There will be the typical US supporters wrapped in the American flag in here to tell you how wrong you are, and there couldn't possibly have been any outside involvement.

I'm ready for it man, I got an American flag of my own to tell them how we funded the now know Al Qaeda back in the 1980's and 1990's before and during the Afghanistan Conflict.

The so called rebels funded to overthrow Assad in Syria and Sadam in Iraq which are now ISIS. Which basically now pose a world wide threat and have the possibility of acquiring a football, due to the instability of the Middle East. Seriously We thought religion and extremism could be conquered by a pair of Nike's and a Happy Meal?

Hahaha these internet Meme's are great however, I do still think they just throw more logs into the fire. But.... it is a great source of laughter

But this time CIA got the idea good because they are rabidly trying to damage Putin
edit on 6-3-2015 by Aaamok88 because: (no reason given)

posted on Mar, 6 2015 @ 07:24 PM
link
The thing we must realize Russia of the 1990's and early 2000's was easy to push around.
The amount of corruption was through the roof, the streets were ruled by gangs which were easy to influence.
Most of the factories and companies were bought out by over sea businesses and some were taken by the Russian Aristocracy. Basically Russia was a Wild West during those days and now they moving forward and when we isolate them they can focus more on their internal situations/problems and fix them.

Which is why we can not just hassle them around and give them sanctions thinking we can isolate them. Seriously who comes up with these tactics?

Exactly and the problem is the always repeating scenario of some opposition member being murdered before a revolution. Sometimes it's even just people who had ties to an American Embassy. Which makes it even more clearer!


No he didn`t, it was of course directly picked up by Western Media.

The article that killed Nemtsov was a fake

Well this theory would be all well and good if it wasn't for the fact that many who live in Russia and speak out against, or investigate its government's corruption either end up missing, critically beaten or dead. Sometimes under mysterious circumstances.

I have no doubt that the USA operates inside Russia, and i have no doubt that Russia operates within the USA. Just because the USA operates in Russia doesn't mean that Nemtsov was murdered by American agents. Considering the violent history which surrounds activists and those who criticise the Russian government, Nemtsov's assassination could have been carried out by any number of entities.
edit on 6-3-2015 by daaskapital because: (no reason given)

originally posted by: daaskapital
Well this theory would be all well and good if it wasn't for the fact that many who live in Russia and speak out or investigate its government's corruption either end up missing, critically beaten or dead. Sometimes under mysterious circumstances

Putin had some of those traitors nullified and I don't blame him one bit, CIA collaborators deserve their fate
edit on 6-3-2015 by Aaamok88 because: (no reason given)

Probably can't even conceive of the idea, even.

Nope, definitely the U.S. because only they can come up with ideas like that.

posted on Mar, 6 2015 @ 08:41 PM
link
An article I read earlier browsing around is kind of intereseting.
Professional Killer comments on Nemtsov murder

This kind of crap means nothing when it's a known fact that fake facebook and twitter accounts are a mainstay of propagandists.

Edit: Take a close look at the grammar in the posts. Truly imbecilic grammar that tells me the entire thing is fake.
edit on 6-3-2015 by CharlesT because: (no reason given)

IF I was the chief investigator I'd be more inclined to look at one of the other opposition parties. Bump off a competitor and try to incriminate Putin. Two birds with one stone.

But really it could be anyone, when it comes to political intrigue the waters run deep and cold.

I won't be surprised if they find a body in Gorky Park with some incriminating evidence on them though.
(A little nod to Harrison Ford)
edit on 3/6/2015 by Kukri because: (no reason given)

Kukri, I left this feud with Xcathdra in your capable hands,

If true,then Ukraine's government is getting ready to run

What are you doing over here?
edit on 6-3-2015 by CharlesT because: ojnhnhjo

Bouncing around like a cheap rubber ball Charles. I have so many tabs open my browser is developing a psychosis, MPD no doubt.

posted on Mar, 6 2015 @ 10:55 PM
link
I would not be too surprised of the CIA's involvement however I just don't think they are that smart nor that stupid. Mr. Netsmov was turning into the only strong opposition to Mr. Putin's administration so it really doesn't make sense to take him out other than if you are Mr. Putin.

Mr. Putin has demonstrated in the past that a dead opposition is better dead early in the game than after he attains a stronger following. I believe it is a little early to be pointing fingers absolutely when this thing could very well have been a simple domestic situation. Mr. Netsmov was not a pillar in the community as he was known to have a wife and several others on his payroll so to speak.

I don't discount the US involvement but it hardly makes sense to take him down before a huge planned rally and before he really built any sort of big following so i have my doubts, makes more sense if Mr. Putin put him down before the rally and a chance he could have had to make more connections and as the old phrase goes Hell hath no fury like a women scorned, it could have been the brother...father...or any hired hand of the many women Mr. Netsmov kept in his open closet.