What is this sparkly thing in the southern sky?

I'm located in Denmark and just now at 21.40 local time my girlfriend spotted this very sparkly thing in the sky.
I first told her it was a plane and the reason it appeared to stay put in the same spot was because of optical illusion.

However, it didn't appear to come any close or move away.

So I grabbed my camera and tripod and set it up in our bedroom and I could clearly see it was moving slightly west.

I grabbed a few photos as well, but I just don't have enough magnification to make out any details.

Anyways, I'm uploading the video and I'll also make a wetransfer of the .raw file and a cr2 file for anyone wanting to have a look.

This photo is unedited, just a jpg'ed raw file. But can't really make anything out of it.

The sequence is unedited... just extracted the DNGs from the raw file, lined them up and exported a proresHQ .mov file.


Hah, didn't realise they were that sparkly It's quite a show to watch. So what's the technicalities behind their sparkling?


EDIT: Ah, I read now that both Venus and Uranus are spottable in the southern sky. Probably one of those two
edit on 4/3/15 by flice because: (no reason given)

scintillation . when the atmosphere boils with whatever light diffracting particles are being stirred high up . , ice, moisture , pollutants . anything that deflects light really

on the horizon or near too its most pronounced due to looking through more atmosphere , more particulates moving = more twinkling

the moons good tonight , for scoping shots .. might get lucky and catch a TLP

A couple of years back I downloaded and installed Stellarium to my PC. Very handy for a quick lookup to see what is visible and to identify objects.... and it's free, which is always good!

Can be found here:

It's mad that you've posted this - I was out in my garden earlier (in the UK) & noticed the exact same thing.

The sparkling was so striking that I actually went back into the house so I could tell my family. I just wish I'd run back out with my phone, because it has Planet Finder & Star Rover on it.

I wonder whether we were looking at the same star/planet.

Now I know to park the 3D cam outside, in a few hours.

posted on Mar, 4 2015 @ 03:54 PM
link
i can see now how some people can get caught up in labelling "ordinary" stuff as extraordinary when not knowing the science behind it. See it makes sense when you explain it with the athmosphere, but honestly I didn't think about it when I saw it hehe.

I wish I had a longer lens and a tracking system. Would be fun to get some more detail in these neighbours.

I'd say Venus this time, it is very bright and closer to home, and you can see more of a pulse like effect, though it is more noticeable lately... and not so much scintillating like far away stars, Sirius is the king of scintillation though.

posted on Mar, 4 2015 @ 07:42 PM
link
I always thought that Venus was the sparkly one and Mars was more monotone yet bright as well.

Either of them will be sparkly, considering it's not the planet that is sparkling but the atmosphere. It mainly depends on how low in the sky they are. The closer to the horizon, the more air is between you and the planet you're looking at, so the more distortion and sparkly motion.

A couple years ago, I saw a particularly sparkly Jupiter, because it was close to Earth, very bright, and near the horizon.
edit on 4-3-2015 by AshOnMyTomatoes because: (no reason given)

most likely , although is mars still right next door to Venus , a few arcs away ? op did you notice Mars too ?

posted on Mar, 4 2015 @ 11:05 PM
link
I adjusted Stellarium to Denmark, and set the time appx to your local time. Judging by the alignment of the other stars in your pic (assuming they aren't hot pixels), it "could" be Arcturus. Stars do seem to line up to that one, and it is pretty prominent right now.

posted on Mar, 5 2015 @ 02:50 AM
link
I managed a quick shot from my balcony a couple of weeks back. Noticed that there was another light point just above and to the right of Venus, Had a look through the spotting scope and it was Mars. 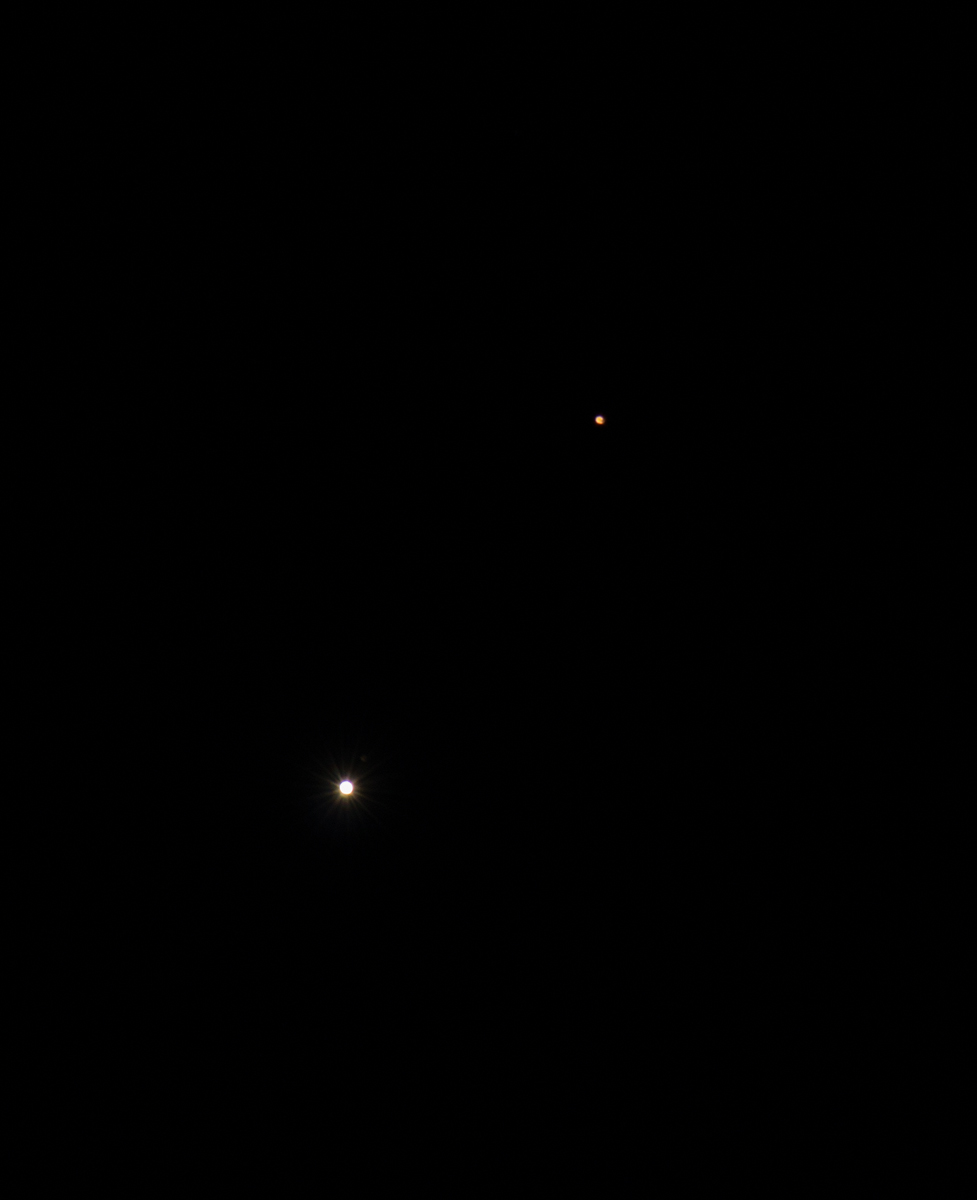 I really want to do some nighttime and astro photography. A project for this year I think.

posted on Mar, 5 2015 @ 03:39 AM
link
Is it possible you have seen the diffracted ghost of Venus? many have noticed this (including myself)


EDIT: Ah, I read now that both Venus and Uranus are spottable in the southern sky. Probably one of those two

do you mean towards south in the northern sky,

You map shows you to be in the northern Hemisphere.

Uranus is no visible to the naked eye, maybe through a really good telescope however not like Venus, Mercury , Mars Jupiter and Saturn which are the only planets visible with the naked eye.

If it sparkles and twinkles it must be a star, the planets don't sparkle they just bright especially Jupiter as of late and Venus which is brightest planet visible.

originally posted by: EndOfDays77
Is it possible you have seen the diffracted ghost of Venus? many have noticed this (including myself)

posted on Mar, 5 2015 @ 12:05 PM
link
Didn't have time to do this this morning, but in case people don't believe the astrometry link, here's the Stellarium view: