I think the trick is to use multiple smaller laser station instead of one of those enormous chemical laser.

If you look at previous last based ASAT tests, the vast majority blinded the satellite but didn't cause it to explode. It's only recently that they've caused massive damage and the lasers that did it were pretty significant.

What HAS that secret shuttle BEEN UP to anyway?

If in fact Iranian did it, it can be labeled as lucky shot as, as I said before, the satellite must not be hardened against over irradiance.

Here we're not talking about sensor blinding or melting metal, just to go above what thermal regulation is capable to endure, and keep the beams continously as long it is possible to increase the internal temp. But usually satellite are covered by "golden" thermal reflective film all over...

Industrial CO2 laser just need triphased 600V avail. in normal industrial shop, but they are more on the 10s of KW at very max.

Here is some very rough calculation.

A 10KW single laser focused on that 1meter diameter circle if we ignore propagation loss = 12.7 KW/m^2

These figure seem to indicate it would be possible to overload thermal management in a poorly designed satellite.

posted on Mar, 1 2015 @ 07:20 PM
link
LASER eh? just shows you how useless, or rather how pesky they are in space...all that debris, and as John Mcenroe might say, "You cannot be serious"

The big part would be the tracking and targeting system.

Nothing Russia or China could not build.

Add the fuel for firing a dozen shots and the same amount of targets could be hit.

Except that this satellite worked for over 20 years. I don't think it was poorly designed.


Except that this satellite worked for over 20 years. I don't think it was poorly designed.

Yeah I won't argue about that but I'm still perplexed about my previous calculation figure and the fact that commercial technology usually does not derate specification by a very big factor.

Also, I've checked atmospheric distortion, and they seem less severe than I thought. Worst case is about 20uRad. That's 2meters at 100Km altitude!

posted on Mar, 1 2015 @ 07:43 PM
link
I wonder if it was monitoring some sensitive part of the world, and the military didn't want it used by anyone else. There was talk of using the image information from commercial and research satellites to help in search and rescue missions.

Tell us who it was over, and that will tell who killed it.

Intriguing, the fact there was a temperature spike may indeed indicate a anti satellite weapon system of some kind, maybe even a hunter satellite or satellites (using a grid of them to aim at a common target) using a directed energy weapon.

After that age it would likely have limited positioning fuel but maybe enough to explain the explosion if it was an internal failure which is unlikely as the military systems are made tough and there component's are usually backed up with redundant system's.

Maybe the fact it is twenty year's old was incentive for someone in another department to decide a live fire test on an active but nearly redundant satellite to test if there system would be detected.

Operative as you point out Heat or Temperature spike before the satellite Blew apart and that does make me think of a weapon of some kind, not a kinetic projectile though but like I say directed energy of some kind, how high the delta T reached would be interesting but not sufficient without localized temperature transducer data which they may possibly have.


I have mentioned this elsewhere, just before the end of the cold war from the late 70's onward the Soviet's were developing a Radar based anti missile, anti aircraft system that could in theory with enough power have been also used as an anti satellite system.

The basic gist of it was this.

A multiple radio frequency radar array would emit a broad bandwidth of radio energy at an incoming object, the return or reflected radio energy was analysed to determine what wavelengths where most absorbed and the inverse complex conjugate of these most absorbed wavelength's was then passed to a specialized narrow beam radio emitter that could handle extreme amplitude's of energy and was amplified to such an immense amplitude then beamed at the object that was approaching be that a missile/aircraft or even satellite.

They successfully tested it on several unmanned aircraft and test missile's but it was still having many problem's and required the output of a nuclear reactor (I believe Chernobyl was sourcing it) so was not a portable system (at least at that stage of it's development).

The effect's were to cause by energy absorption the atomic structure of the incoming object's materials to oscillate causing the object to both grow very hot indeed and to disintegrate.

I doubt it is the Russkies but then Putin is a little crazy, thing's are getting bad over in Russia and maybe he will also use tha bad situation to sneak a Soviet style system of governance back into Russia by making the people there desperate enough to accept it as poverty and shortages begin to bit, they are threatening and posturing and just maybe they thought this elderly satellite was a spy, heck maybe it was but an old one and that tech is nearly redundant against steal anyway as you have to first find your target before you can aim your big radion dish at it.

Yes I think maybe an anti satellite system but Who's.

After reading a little bit on sat thermal control, I think it is possible to overheat a sat., especially if it's using the "insulated concept", there is thermal radiative emitter on the side oposite to the sun, this would be the side to "paint" w/t the laser. But it mean tracking this sat in daylight... These radiator have high emissivity,meaning high absorbitivity. Perfect to absorb the laser energy.

Oh it can be done, but it's only in about the last ten years they could destroy them instead of mission killing them with a laser system. 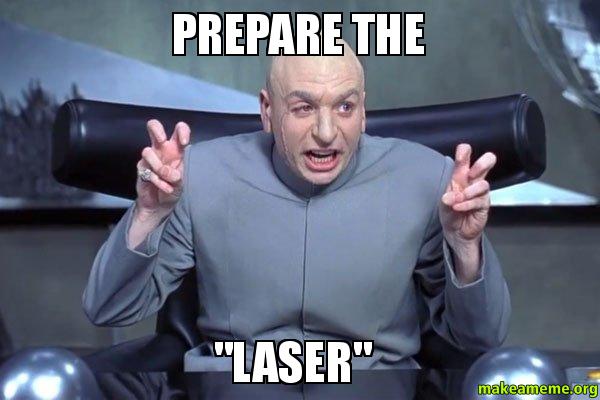 All jokes aside now is when the party starts get ready to see highly advanced lasers and do gads!!!

Isn't that the basis of a scalar sytem an interferrometric shot?

I was thinking the same thing.. Until I realized that we are talking about an old, redundant satellite. I am guessing it was a US test on an old satellite that was due to be junked. China or Russia would likely pick something juicier in order to send a message.