ISIS vow to throw homosexuals off of leaning tower of PIZZA 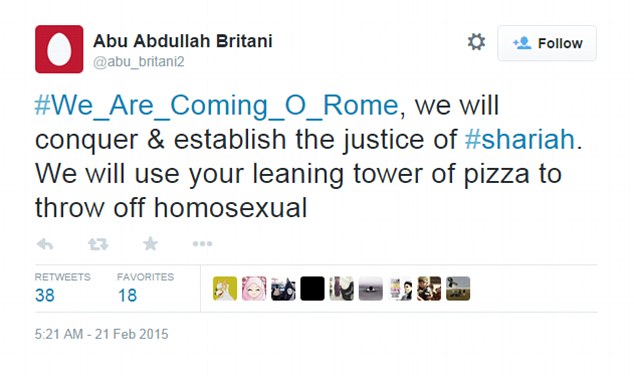 ISIS are geography and spelling wizards

For those of you who are unfamiliar with this architectural marvel, it is located between the Arch de Truffle and the Panfriedtheon. Google that for confirmation. Below is a picture of the fateful tower in question. 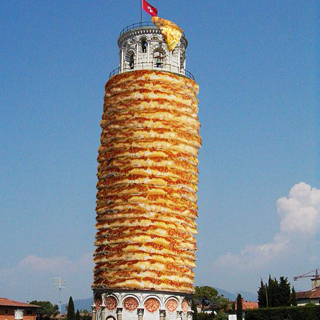 Naturally, other twitter followers responded accordingly and an online battle ensued for the hearts and minds of men.............. 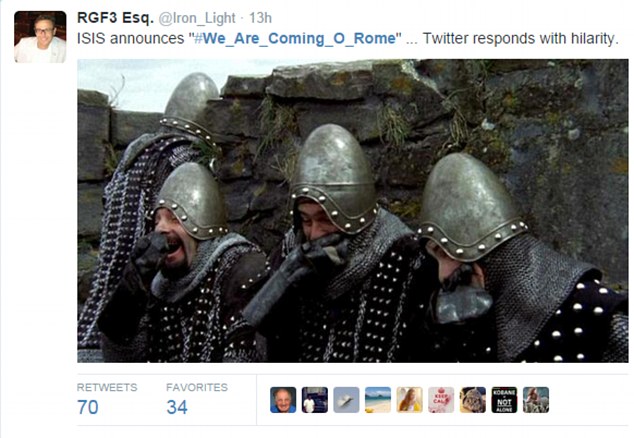 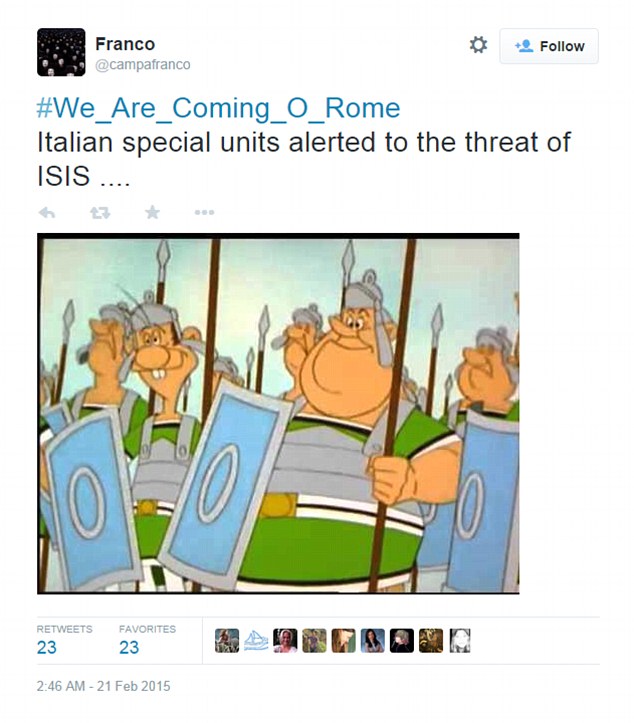 Yes, this should be put in the jokes forum because quite frankly it is laughable to say the least. If this whole ISISISIS (sorry, didn't know when to stop) thing is not already glaringly evident as g_d-damn propaganda to drive a wedge between religious moderates of differing faiths then you must be blind - it is a war for your minds.

The MSM wants you to HATE, when you hate, you cannot think laterally and when you are not thinking laterally you are easily manipulated and very easy to collectively control.

Everytime entire populations are controlled and brainwashed, they allow and virtually insist that their leader(s) slaughter entire peoples - including innocent men, women & children.

And, as for the content of this twits twitter, as ATS is my witness, I ask Allah to greet you with aa big fat kiss, on the mouth, with tongue, when you arrive to where-ever the hell it is you fantasize of going to once you are martyred.

posted on Feb, 24 2015 @ 04:40 AM
link
ISIS wants to throw homosexuals off of a building? Sounds like they are integrating themselves into the conservative Republican Party.

ETA: well look on the bright side, at least we can use this to mend the rift between ISIS and Christians. Sharing a common goal really helps bringing people together.
edit on 24-2-2015 by Rosinitiate because: (no reason given) 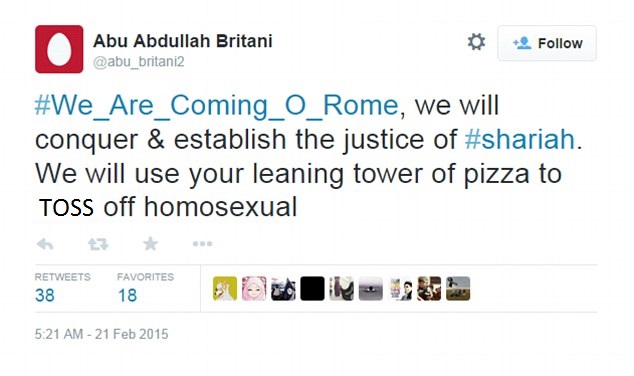 If they throw them off the tower of pizza, won't they just comfortably land in the giant tub of garlic dip?

I'd just stick an armed plain clothes cop there and wait for them to carry out thier threat. Shoot them on the spot the moment they pick anyone up to throw them over.

That will be a couple of these idiots off the planet for starters.

Also, with ip tracking, intel should be able to locate the twit, unless they are the twits.

edit on 2 by Mandroid7 because: Edit

"TOSS off Homosexuals", dirty pervs, can't they get a room for that?

Why do they need a tall building to do that?
edit on 24.2.2015 by flammadraco because: (no reason given)

"TOSS off Homosexuals", dirty pervs, can't they get a room for that?

Why do they need a tall building to do that?

At least they have the "common decency to give the guy a reach-around."


ISIS wants to throw homosexuals off of a building? Sounds like they are integrating themselves into the conservative Republican Party.

Did you know there are conservatives homosexuals and homosexual Christians too.

originally posted by: Stormdancer777
a reply to: Rosinitiate


ISIS wants to throw homosexuals off of a building? Sounds like they are integrating themselves into the conservative Republican Party.

Did you know there are conservatives homosexuals and homosexual Christians too.

That... and the fact that there are no concerted efforts by anyone in the US to throw homosexuals from high buildings (made of pizza or not) and video the actions and post it on social media.... which ISIS has done.

posted on Feb, 24 2015 @ 07:24 AM
link
I am glad some of you think this is a big joke, hahahha, crucifying Christians is a riot, so is burning people alive, and persecuting thousands of Yazidi trapped on the Sinjar Mountains, oh man it's a real tear jerker, lololol, oh oh and here's a good one the forced Christian exodus from the middle east in unprecedented numbers, that one makes my day.

Maybe ISIS wants you to think they are to stupid to tie their own shoes, but in the mean time they have murdered and tortured their way through the middle east

The jokes here pretty much write themselves.

Throw the gays off the queer leaning building?

they figure it will be too much trouble to coax the goats up there?

I'd love to see an army of women and homosexuals be the ones to wipe ISIS off the planet. There would be some karmic justice in that.

The British-based Syrian Observatory for Human Rights said the militants carried out dawn raids on rural villages inhabited by the ancient Christian minority west of Hasaka, a city mainly held by the Kurds.

Here this is a funny one

Islamic State in Syria abducts at least 90 from Christian villages:

Where is the Leaning Tower of Pizza exactly?

originally posted by: Krazysh0t
Where is the Leaning Tower of Pizza exactly?