posted on Feb, 18 2015 @ 06:25 AM
link
I had been thinking a lot about the problem of Free Will lately and reading various views etc. Last night when i went to bed this was still clearly at the back of my mind as i had the strangest dream about it.

Being rather unwell at the moment (The Flu) i had the usual crazy mishmash of dreams no doubt caused by fever. This morning however just before i awoke i had quite a lucid dream and i was shown a piece of paper that appeared to be A4 in size. On the A4 appeared people and various forms but they appeared from nowhere, there was no artists hand that could be found. I myself appeared on the A4 and began speaking, i can't remember what it was i was saying but my mouth was clearly saying something. It was me but at the same time i was somehow detached from myself.

I realized that the little me on the A4 had no control over his activities, over anything he said or did. He was just a creation, an actor on the stage of the World. I was perplexed for a moment and disturbed until the thought dawned on me from somewhere that the real me was observing all of this happening. I could not see the hand of the artist because it became clear to me that my awareness/being/consciousness was doing all of this. The essence of my real being was the doer, the artist itself. It was impossible to see the artists hand because it was outwith what we call reality, the A4.

It then dawned on me that as long as we think we are the doer on the A4 (the little me) then there was no possibility of realizing our true nature. More than this, it also dawned on me that the little man on the A4 had no free will as long as he thought he was the doer. If he awoke at anytime and realized he was the being behind the art then he would have at that point free will. Never would he have any free will at any other point, although of course he likes to think he has.

What a cool dream, however or wherever it came from. " the little man on the A4 had no free will as long as he thought he was the doer", this I think sums up your post. I think that that moment when we are just waking up, the little man who thinks he is the doer hasn't fully gathered up his "I'm the dude" clothes and gotten dressed for the day of being "I'm the dude".

Actually Yogi, as I read your OP, I was drawn in and for a few moments left behind my little doer dude and it was very relaxing. Then of course I set my fingers to my keyboard, setting out to be the doer of the reply and by the end of my sentences he, the little dude, was back in full effect, struggling to find the words to reply with. Hopefully, enough of the freedom I felt has managed to squeak on through to you before the veils of little dudeism regain control.

I think that that moment when we are just waking up, the little man who thinks he is the doer hasn't fully gathered up his "I'm the dude" clothes and gotten dressed for the day of being "I'm the dude".

Great way of explaining it Terry. The dream was lucid and had a real feeling of insight or revelation about it. I had a very strong feeling of being shown something true. Thanks for your reply.

And a final thankyou Yogi. Your wonderful and simple dream has remained with me off and on throughout the day. 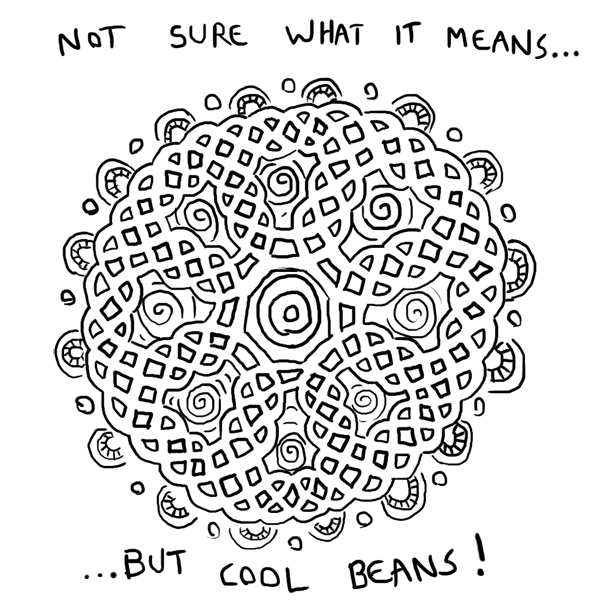 ...but this story has an appeal to me as an artist. Drawing stuff like the above can put me in a meditative state, and sometimes making complex and intricate figures can almost be compulsive. That and sometimes it's a stress relief to make doodles and caricatures that are just silly and ridiculous. (Because they're fun.) I'm sure other people with art(s) as a calling may feel the same. (Some people may make a trade of it, but if it's a calling you'll do it whether you can make money by it or not.)

Perhaps you had some insight into the nature of an artist you weren't aware of before? Might be fun to try doing some art yourself sometime and see what comes of it.


I used to draw quite a bit pauljs maybe i will do so again, cheers.

p.s Sorry for the late reply, i somehow managed to miss your post first time round.