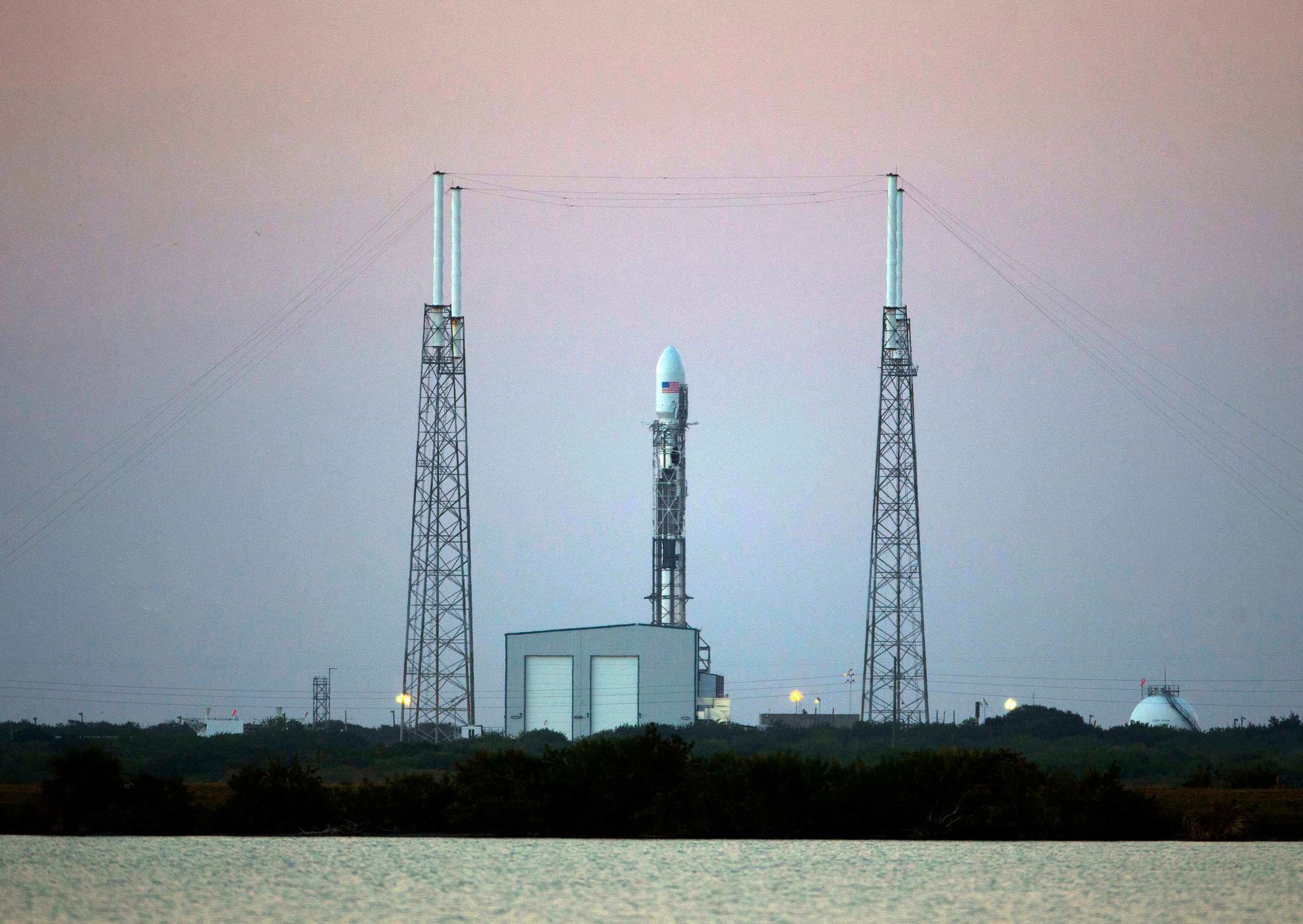 
The Deep Space Climate Observatory, abbreviated as Dscovr and pronounced “discover,” was to blast off at 6:10 p.m. in Cape Canaveral, Fla., but the launch was called off because of a problem with the Air Force radar for tracking the rocket to space. The next launch opportunity is Monday at 6:07 p.m. Eastern time. 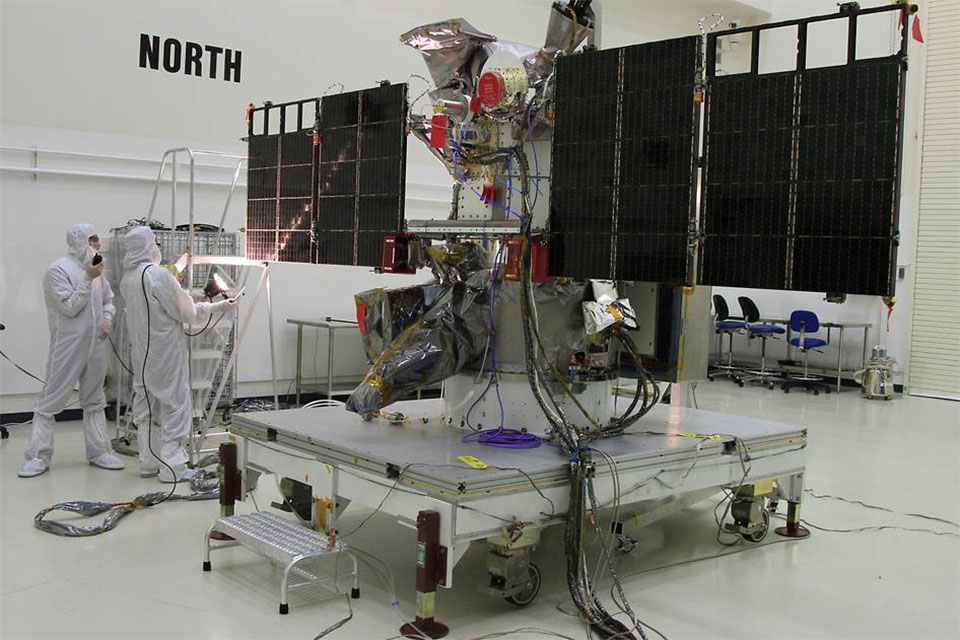 The (Deep Space Climate Observatory)better known as DSCOVR, will monitor the constant stream of charged particles from the sun, also called “Solar Winds.” These observations are the backbone of NOAA space weather alerts and forecasts.

In early February, the United States Air Force will launch a National Oceanic and Atmospheric Administration (NOAA) satellite called Deep Space Climate Observatory, or DSCOVR, into orbit around this spot. NOAA will use DSCOVR to monitor the solar wind and forecast space weather at Earth -- effects from the material and energy from the sun that can impact our satellites and technological infrastructure on Earth.
However, the three solar wind instruments on board are also exciting researchers with the hope of untangling some unsolved science mysteries about the solar wind. Two of the instruments were built at NASA's Goddard Space Flight Center in Greenbelt, Maryland, and one at the Massachusetts Institute of Technology and the Harvard-Smithsonian Center for Astrophysics, both in Cambridge, Massachusetts.

"One of our main questions about the solar wind is based on the fact that it cools down as it moves toward Earth but not as fast as we'd expect," said Adam Szabo, NASA’s DSCOVR project scientist at NASA Goddard. "There must be some heating mechanism that slows down the cooling. The solar wind instruments on DSCOVR will help us determine what's providing that extra heat."

A short Video about the Satellite


Now I know Al Gore was behind this project in its infancy BUT not really sure if his grubby little hands are still in this.
BUT I do think this will be a very useful tool for us in the near future. The $340 million mission is a joint effort of NOAA, NASA and the Air Force.
I get excited to hear NASA in any news stories as of late.. We NEED our space program BACK!

originally posted by: Aleister
Thanks, I didn't know about this satellite or mission. Hope all goes well on the Launchpad. I assume the launch will be shown on NASA TV.

posted on Feb, 9 2015 @ 08:18 AM
link
Space x also cancelled a launch yesterday due to a radar problem and will be lifting off the same day as this rocket ,

As mentioned on a similar thread about this launch, SpaceX is also going to try a 2nd attempt at landing the first stage of the rocket on a barge in the Atlantic Ocean. They tried the landing last month on the launch of a resupply mission to the ISS, but the first stage crashed -- most likely due to not enough hydraulic fluid for the guidance fins.

They will try the landing again this flight, and they've added more hydraulic fluid. However, due to the deep space nature of this mission, the first stage will be coming down faster, which may make it more difficult.

The reason for the landings is that SpaceX wants the first stage to eventually be reusable.

SpaceX has stressed that these landing attempts are secondary to the actual mission of delivering its payload, and that they are in the very early stages of figuring out how to land these first stages, so they expect there to be some early failures (as there was last month, when the first stage blew up while attempting to land).

I may be misunderstanding a good bit of this, but why would they want to concern themselves with the sun's output? For all the climate models to be accurate, the sun's affects must be static. If the sun's output is a factor in warming, how much? Man has no control over the sun.

originally posted by: network dude
a reply to: DjembeJedi

I may be misunderstanding a good bit of this, but why would they want to concern themselves with the sun's output? For all the climate models to be accurate, the sun's affects must be static. If the sun's output is a factor in warming, how much? Man has no control over the sun.

We may not have any control over the Sun, but the Earth's climate is a combination of the Sun's energy interacting with the Earth. if we understand that interaction and the mechanisms behind it (all of the mechanisms -- not just the Sun's output), then maybe it would be possible to mitigate some of the more harmful effects of that interaction. Knowing exactly what the Sun is doing, then seeing how it affects the Earth can help them fully understand the interaction.

One analogy (and admittedly, not a great one) would be wanting to understand Hurricanes better so that we could build structures that better survive hurricanes. We can't change hurricanes, but we can change how hurricanes and buildings interact.

Thanks, that does make sense. I was just a bit confused since in the past, discussing the sun's role in AGW was greatly minimized. And thinking logically, since the sun's output is not static, if it plays any factor at all in warming, (as i suspect it does by a large margin) then the climate models couldn't predict much of anything missing that variable.

I just wonder if it was programmed to give a predetermined result, or if it is real science....

I may be misunderstanding a good bit of this, but why would they want to concern themselves with the sun's output?


You are, indeed.
The spacecraft will study space weather. Which is exactly what the quote in the OP says.


NOAA will use DSCOVR to monitor the solar wind and forecast space weather at Earth -- effects from the material and energy from the sun that can impact our satellites and technological infrastructure on Earth.

It also has instruments which will be used to monitor outgoing radiation from Earth. That's the climate part.

There are satellites in orbit around Earth (this one won't be) which monitor solar irradiance. It doesn't change much but those changes are taken into account in modelling.
spot.colorado.edu...