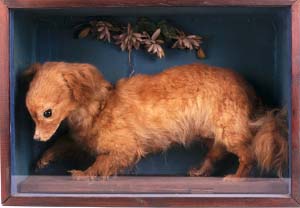 This little guy is what was once called a Turnspit dog . They were bred for the sole purpose of turning a spit, as the name implies.

Basically, they were not used as pets but to make the lives of the two legged household members easier.

Prior to the introduction of turnspits around the 16th century, the painstakingly tedious and unrelenting job of turning the spit was left to the lowest ranking member of the household, “usually a small boy“, though in larger households the size of the spit necessitated delegating the job to an adult.

These poor animals were nothing but tools to be used.

Turnspits were generally seen more as kitchen tools than fuzzy members of the household who needed just as many belly rubs and chin scratches as normal dogs. Along with being subjected to the same long hours and awful conditions as the human spitjacks before them, turnspits would often be cruelly mistreated by their owners. For instance, to train them to run at the correct speed, a common method was simply to throw a hot coal into the dog’s wheel every time it slowed too much. During their off-time, the exhausted turnspits were known to work great as footwarmers.

It's a hell of a thing that a breed of dog was made for no reason other than to be used in such a way. Thankfully, thanks to steam powered engines, the practice ended. Unfortunately, so did the breed. It is now extinct.

Turnspits were ultimately replaced by steam-powered machines and by the end of the 19th century the breed officially was declared extinct.

I expect that it won't be pretty. If I'm still around I'm going to sit back with a bowl of popcorn and some moonshine and enjoy the show.

You learn something new every day they say. I had never heard of these dogs. They look like a nice dog. I wonder what sort of temperament they had and if they were friendly. They would have to have been an animal that was very obedient and eager to please to put up with that kind of treatment. Very sad that they are extinct.

I just heard about them yesterday and thought it was interesting enough for a thread. I think it's a horrible way to treat any living being.