posted on Feb, 4 2015 @ 07:23 AM
link
This story serves to remind me how far removed from the realities of life we in the west really are.
Ugandan Mubarak Batambuze lost his wife four months ago when she was taken by the crocodile while out collecting water from Lake Kyoga with friends , no trace of her was found and the incident left Mubarak devastated , he had lost his wife and their unborn child.

Last month Mubarak received word from his friends that the crocodile had returned to the lake and his friends were there watching it , so the 50-year-old fisherman decided he would exact revenge on the croc for taking his future away from him , he would fight and kill the monster.
He arrived at the lake and he and his friends attacked the crocodile with sticks and stones but they had no effect on the monster , so Mubarak went to the local blacksmith to get him to forge a weapon capable of killing the creature.


"I explained to him that I was fighting a beast that had snatched and killed my wife and unborn baby. I really wanted my revenge, and asked the blacksmith to make me a spear that could kill the crocodile dead.
"The Blacksmith asked me for £3.20 ($5) and made the spear for me," he says. It was a significant amount of money for Batambuze, but he was determined to kill the animal that had snatched his future.

Armed with his new spear Mubarak returned to the lake , full of fear he launched his attack on the four metre long crocodile , he had tied a rope to the spear so that when he'd stuck the weapon into the beast and the specially created barb held it in position he could pull the crocodile back to the bank where he and his friends could finish the job.

"I put the spear into the crocodile's side, and while my friends were helping to throw stones at the beast's back, it tried getting its mouth up to attack me again.

"It turned violent, and then there was so much fear in the place. But I was so determined, and I wasn't afraid of dying. I just wanted it dead, so I put the spear in its side and I pulled the rope. That got the crocodile into trouble."
It took an hour and a half for Batambuze and his friends, fighting and retreating, exchanging attacks with the enraged animal, before the crocodile was finally dead.

Exhausted, they made their way back to their village. "There was so much shock. What really surprised everybody was how big the beast was. It wasn't an ordinary crocodile. It was so big. And people called me and my friends heroes," he says.
www.bbc.co.uk... 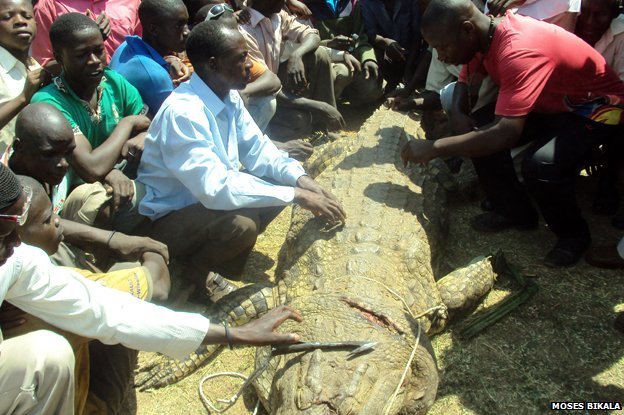 The job was done and Mubarak had exacted his revenge on the beast that took his family.

This story reminds me of the old legends about fighting dragons and other beasties.
In a few generations this great tale of battle may become so too.

But here in the 'West"? It's illegal to kill the "beast" that kills a family member.

Interesting story but how I interpret revenge is that whatever you are avenging yourself on needs to be aware of the reasons for your actions so they can have a moment of recognition that what they did prompted your seeking vengeance.

I'm pretty sure the crocodile had no clue and would have ate all of them if given half the chance.

Obviously how you interpret revenge and how the man who'd lost his wife and unborn child to the crocodile interpret revenge are two different things , in my opinion he did get his revenge on the creature whether it understood it or not.

He and his friends had also removed a dangerous animal from the local water source , something neither you nor I have to worry about.

And your point?
So...because it's [generally] "illegal" I guess that must mean one could not possibly do it?

I think the natural instinct to strike at that which harms one, is actually in its rawest form, a healthy thing for a species to have within it. It ensures that dangerous animals like man eating crocs, lions, tigers, individuals within those species which have eaten manflesh, are removed from the locality. It might be that the individual who slays the animal in question has no thought for the safety of others, only for vengence. But the effects are not in question.

However, the problem with that instinct comes when people are prepared to revenge themselves upon others for a mere slight, which leads to other avenging the person who is the target of the first vengence, and so on and so forth ad infinitum. I think that the original, almost genetic predisposition for vengence that our species has was once universally sensible in its application.

And indeed, the instance that was described in the OP, is precisely what I am talking about. However, in lands where marauding crocodiles, man eating big cats, and snakes the length of a school bus, are NOT a problem for every day folk, that instinct can lead to horrors of unmentionable aspect.

So if a tree branch falls on someone's wife and kills her is cutting the tree down getting revenge?

The tree, and the crocodile, have no capability to feel remorse or be introspective about what their actions may have caused.

If you tie up a serial killer and torture them to death for what they did to your family they certainly have a clue why it is happening.

The crocodile was just being a crocodile.

posted on Feb, 4 2015 @ 09:17 AM
link
I hope they fired up the b.b.q afterwards, croc and aligator ribs and steaks are lovely!!, looks like that big bugger has plenty of meat on him!, and it would be a complete waste not to eat it.

It has nothing to do with how the crocodile thinks , feels or knows.

Revenge definition.
The action of hurting or harming someone in return for an injury or wrong suffered at their hands.

The crocodile was just being a crocodile.

originally posted by: gortex
Revenge definition.
The action of hurting or harming someone in return for an injury or wrong suffered at their hands.

Using your own definition a crocodile is not a 'someone'.

I have no issue with him doing what he did, it just does not strike me as revenge.

Star and flag just for the headline...


This story serves to remind me how far removed from the realities of life we in the west really are.

Had to LOL at this line

I would love to see what you consider to be "Reality", not experience it mind you, just see it for awhile

Being eaten by a Crocodile can happen but so can being hit on the head by a meteor, doesnt mean Id call it "reality"

Substitute Realites in that line with the more fitting word "Possibilities" and I wouldhave agreed with it.... But then I wouldnt have dot my LOL

posted on Feb, 4 2015 @ 01:27 PM
link
Lot of people saying "that's nice and oh how cool" but if this man so full of anger and the feeling of loss was so insurmountable that he felt that he had to kill the 4m long crocodile that caused these emotions I think his loss should be the focus of attention.

I can never imagine going up against any dangerous animal let alone a huge crocodile nor can I imagine losing what he has - I feel for this man who has had so much taken away from him - he might of had a terrible blow to his future but he has made the lives of others much safer.


I would love to see what you consider to be "Reality", not experience it mind you, just see it for awhile

Being eaten by a Crocodile can happen but so can being hit on the head by a meteor, doesnt mean Id call it "reality"


You wouldn't call it reality because it's not going to happen to you , it's estimated 2,000+ people per year are killed by crocodiles in Africa.... that's reality.
How many people get hit on the head by meteors ?

Sorry, bad mood reflected in my thoughts, which showed in my response.

While I feel for this man, and admire the courage it took to exact his revenge, the "west" comment made me think:
A) We may not have 4 legged beasties here in the west that pose so much danger, we have more than our share of 2 legged.
B) If someone here did get eaten, and a family member did this, can you hear the outcry's for the poor croc?

originally posted by: IShotMyLastMuse
At the end of the day, the crocodile was doing what crocodiles do.


And at the end of the day this man was doing what humans do: killing something which threatens the life of his friends and family. Of course in the West this type of action would be less acceptable and less legal, but they don't exactly have the ability to relocate a massive crocodile like this in a small African village. Plus judging by the size of it I'm sure it lived quite a long life.