posted on Feb, 2 2015 @ 05:42 PM
link
New news from the Hawiian islands,
Maui it seems was consolidated into a single kingdom a little later than was previously thought.


The remains of small sea creatures are providing fresh insights into one of the most important periods in the history of pre-contact Hawaii, archaeologists say.

A new study of indigenous temples, or heiau, on the island of Maui has set out to identify when the island’s native population — initially spread out over several small chiefdoms — first came together under a single ruler.


“[Maui] is one of the few places in the Hawaiian islands where the archaeological landscape of an entire ancient district is still intact, not disturbed either by plantation agriculture or modern tourism or housing developments,” Kirch said.

“Heiau vary tremendously in size and form; there were different kinds of heiau for different gods,” he explained.

“When in use, they had thatched buildings to hold temple paraphernalia, wooden images, wooden oracle towers, et cetera, but all of those perishable superstructures are now gone.

“What we see as archaeologists are the stone foundations — generally platforms or terraces, or sometimes walled enclosures.” 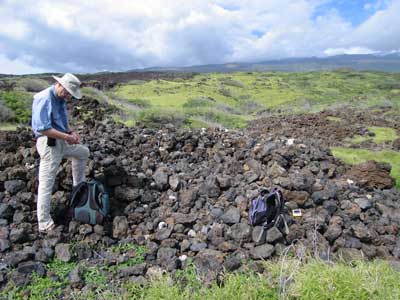 Dr. Warren Sharp of the Berkeley Geochronology Center examines a coral artifact found among the ruins of a prehistoric heiau, or temple, on Maui. (Photo by Patrick Kirch)

And with his colleagues, Kirch has been investigating these sites in search of a unique and durable artifact: pieces of a small, stony coral known as Pocillopora meandrina. 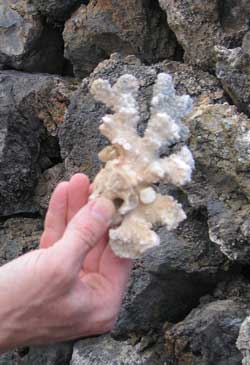 Fragments of coral were sometimes left as offerings at the altars of heiau, or were even built into the construction of the temples, useful for archaeologists because it can be scientifically dated. (Photo by Patrick Kirch)

“The coral branches were placed as offerings on altars, and sometimes incorporated into the stone walls during construction,” Kirch explained.

“We do not know the exact ideology behind this, but there are hints in Hawaiian traditions that the corals may have represented the god Kane — the god of flowing waters, irrigation, and the taro plant — or possibly the god Lono, the god of dryland farming and the sweet potato.”

While their precise purpose remains unclear, the corals are nonetheless useful, because they can be scientifically dated. So although the heiau’s original structures have vanished, archaeologists can study the corals left there to determine when they were constructed and used.


“In the past we have had to use radiocarbon dating, which has much wider error ranges and calibration issues.

“With the uranium/thorium coral dating we are getting error ranges of about 2 to 10 years at two standard deviations. This is a huge advance in chronological precision.

“Second, the new results confirm … that the Maui temples were constructed in a relatively short period of time, with a duration of about 150 years at maximum, between circa 1550 to 1700. 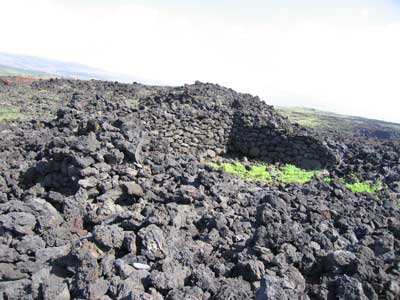 The study focused on the stone ruins of heiau in the Kahikinui district of Maui. (Photo by Patrick Kirch)

The history of the Hawaiian islands is not well understood previous to European contact. This will add a little to that knowledge base.