Ancient Ruins or Salt Mine ?

posted on Dec, 29 2014 @ 11:01 PM
link
So is this ancient ruins or a salt mine ? I'm still trying to figure this one out, so with a little help from ATS members I hope to solve this mystery. So I was youtubing and stumbled across this video which peaked my interest. Please do not post a response without reading the post in its entirety please. Also read the You Tube video posters description.

What has me on the fence about this video is the fact in the google earth image half of the lake appears to be dry while the other half is filled, an updated image overlaps the lake in the middle. If you look at the western part of the lake and zoom in you will see grid patterns and what appear to be roads at the bottom of the lake. The image used in the You Tube video shows things that are no longer visible or are now obscured.

The picture below is no longer visible on the now updated Google Earth. 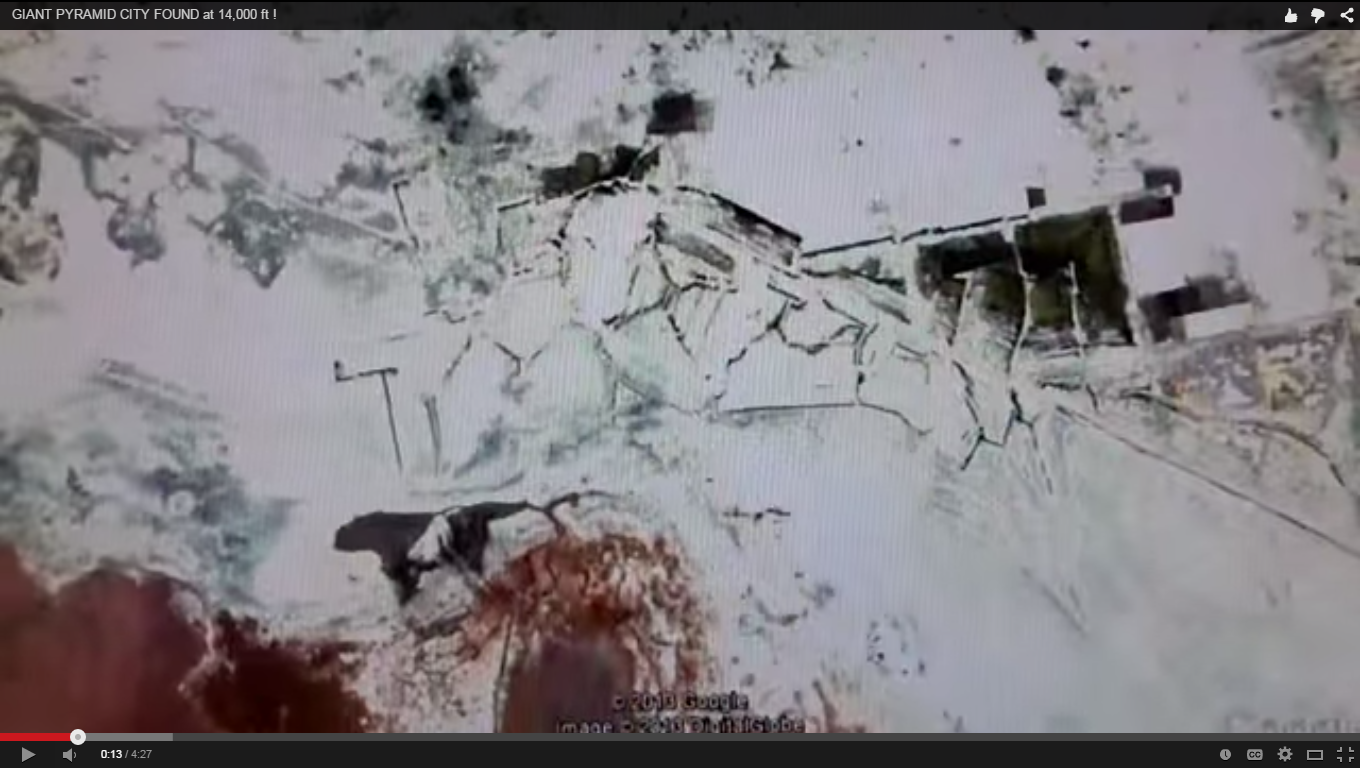 This is what is now on Google Earth 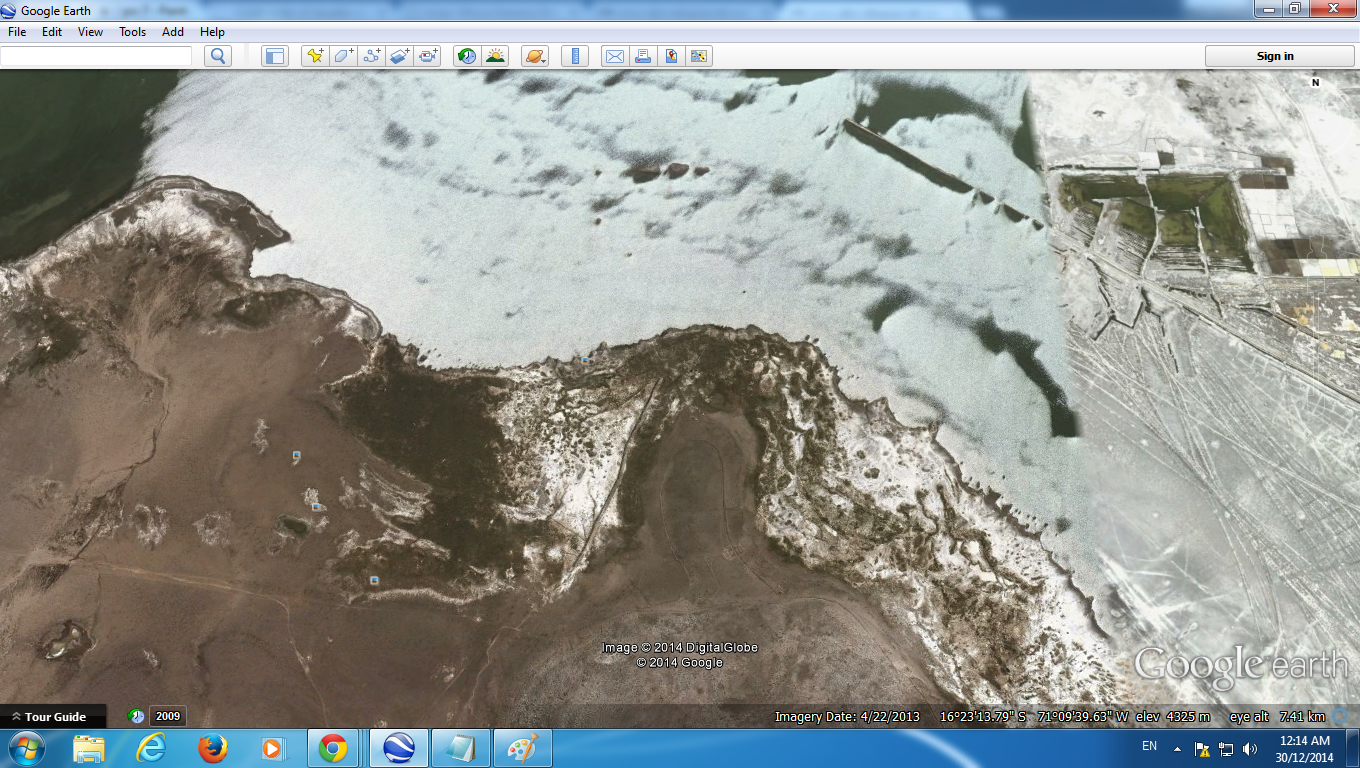 And this is a close up of what was originally on Google earth in the You Tube video. 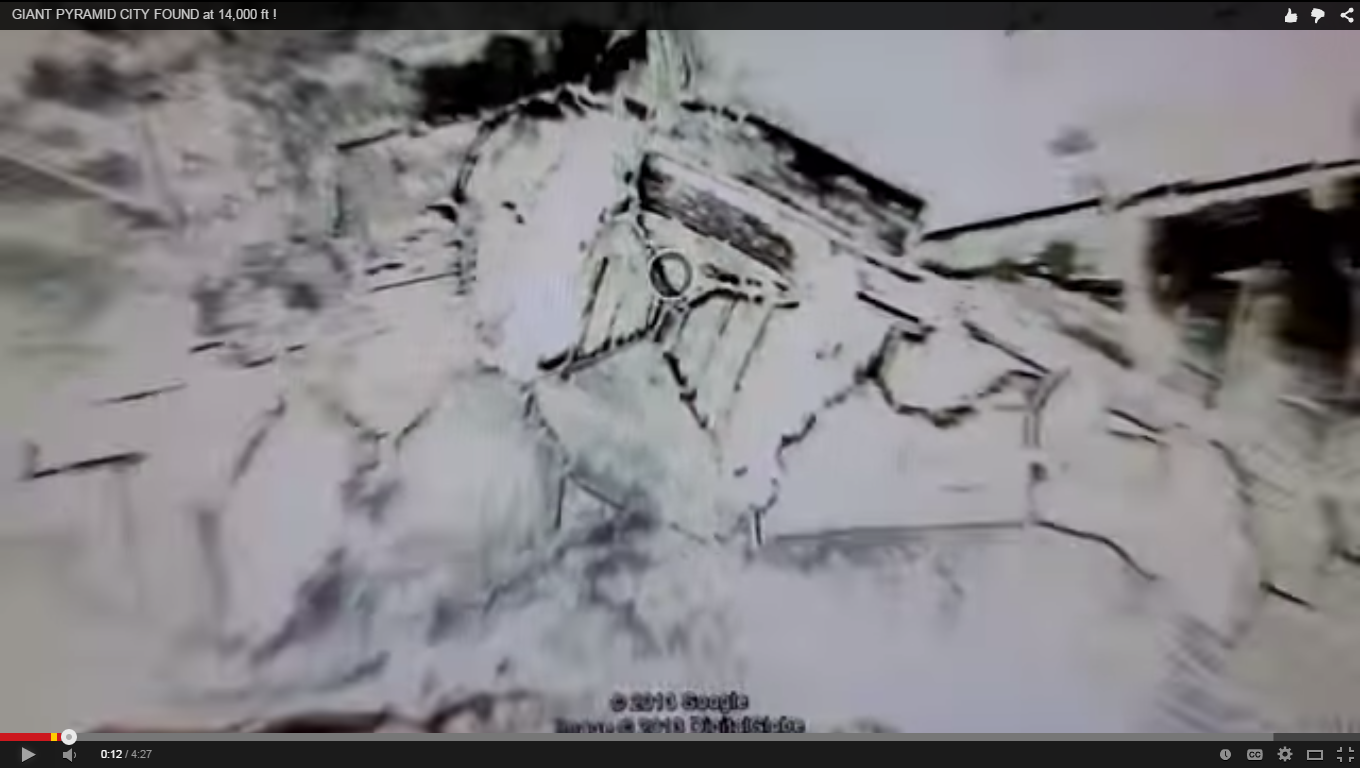 Now I know how salt is produced, you flood a pond and then let it evaporate and then collect the salt. Here are some images of what appears to be that very process. These screen shots are from the eastern part of the lake south of that part of the lake. 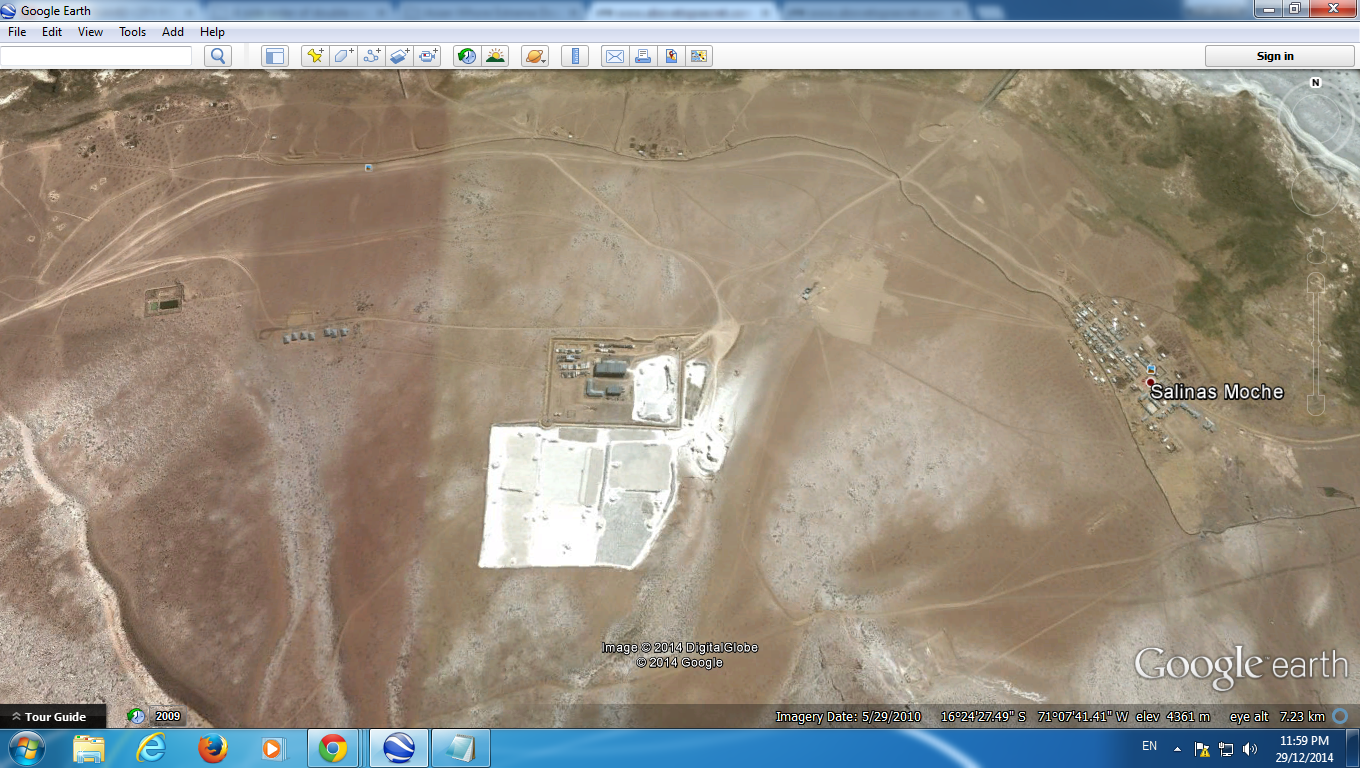 And here is a close up of the picture above and what appears to me to be a vehicle collecting salt from an evaporation pond. 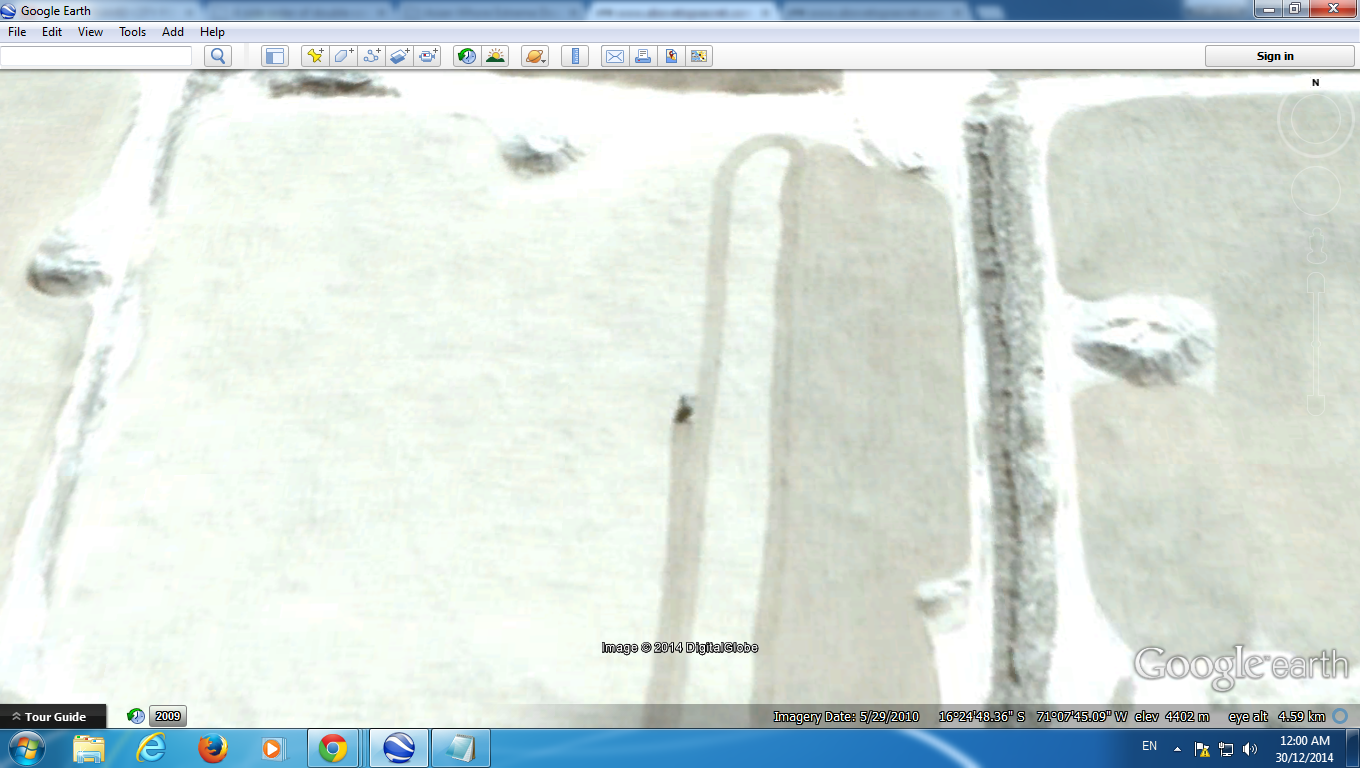 And here is a pic from the Western part of the lake zoomed in. 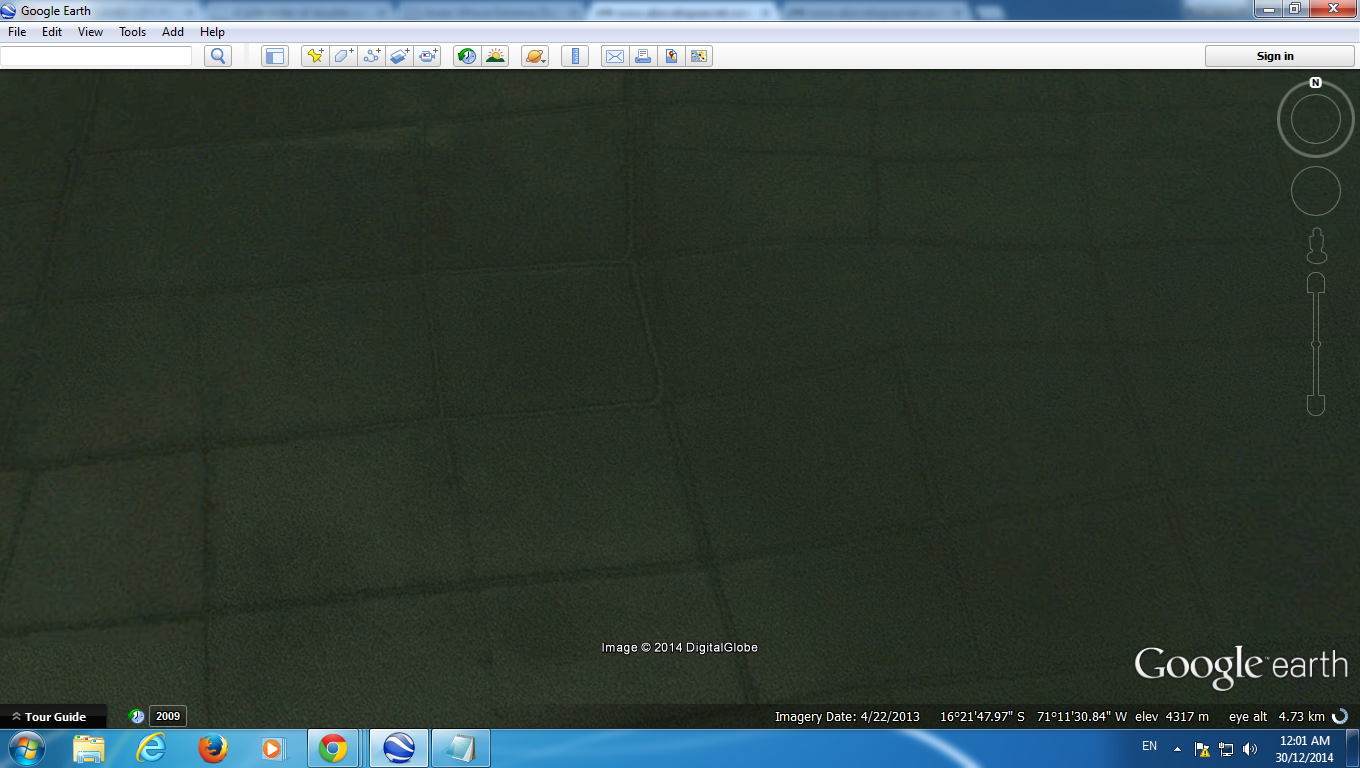 And here is a picture of the entire lake. 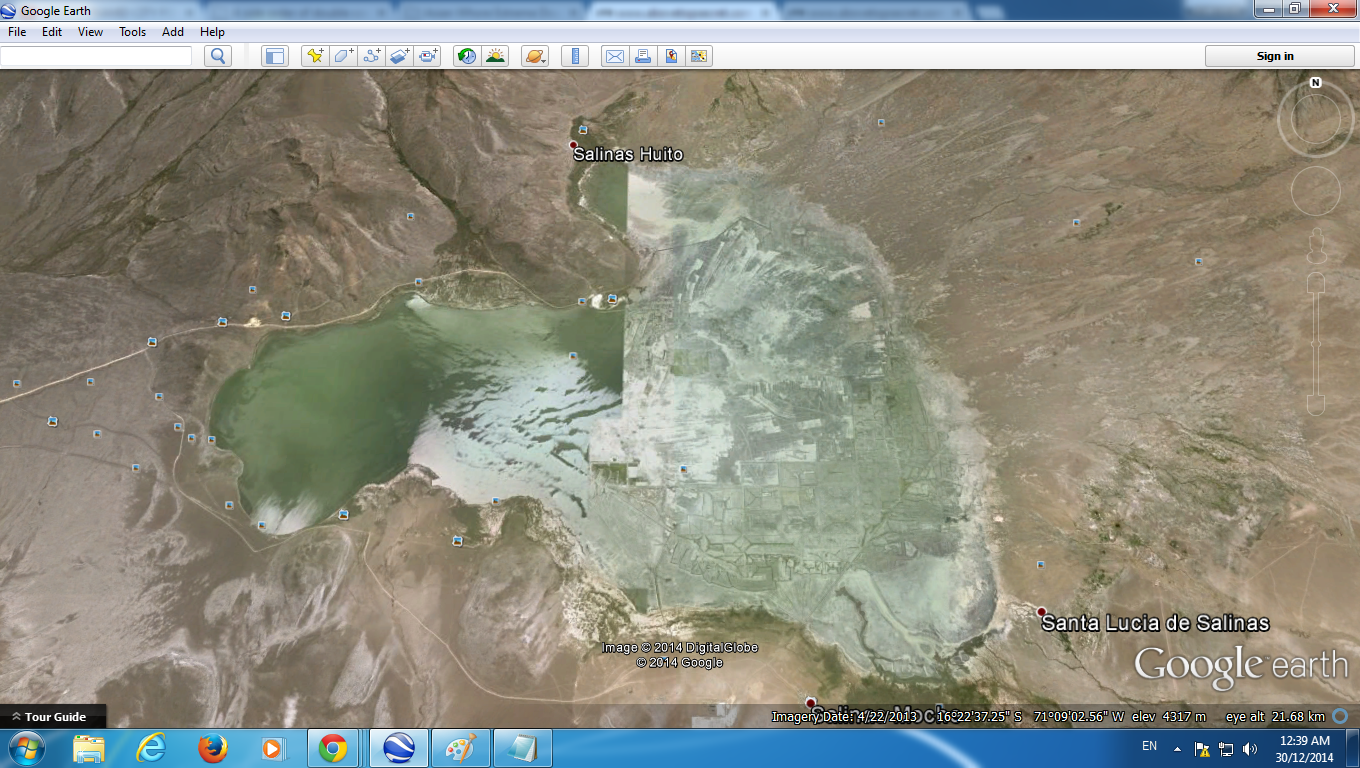 You can find this lake on Google Earth 100 miles West of Lake Titicaca. I'm quite certain this is a salt collecting operation from evaporation ponds, Its the lake I am wondering about, does it annually evaporate ?, do they drain it ?, how deep is it ?, If within the lake they are collecting salt why the unusual patterning ?

So in closing I believe it probably is a salt harvesting operation, but there does seem to be a lot of unusual things about the lake, please do some digging in to this and be skeptical about it just a little. Sometimes things can be made to look like something they are not.
I just thought I would share this curiosity I've found and hope you find it interesting as I did and hope someone here could tell me something about this. I also read some of the comments about the video,but not much of them.

Thank you all ATS

I know they are of two different time frames. The lake being empty in one time frame and the lake being full in another,it just makes me wonder a lot of question, how is the lake emptied. does it happen seasonally, do the empty it? How deep is it?

posted on Dec, 30 2014 @ 10:34 AM
link
The original YouTube uploader said that he did his homework and discovered that there was no salt mine in that area...

...Well, he didn't do his homework very well, because it was quite easy to find information about this place, which is both a salt mine (being mined since the days of the Incas) and it is in the southern part of the Salinas and Aguada Blanca National Reservation, which is a nature preserve. The salt lake acts as a sanctuary for flamingos, and the slat lake has been mined since Inca times.

Here is some information on the salt mine and nature preserve: 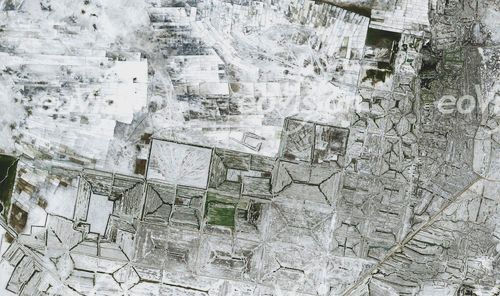 Caption: In the National Reservation of Salinas and Aguada Blanca, a sanctuary for flamingos and wild Lamas, salz [sic] has been harvested since the time of the Incas.

Looks like they did drain it to harvest the salt...

here is a video from it, the lake is called las salinas

for 115 dollars you can visit the place
www.peruadventurestours.com...

Very interesting, harvested since the time of the Inca, that might explain the patterning in the lake. The patterns don't resemble modern methods of salt harvesting. Thank you for finding that.

It seems to be a very interesting place full of history, some day i would like to visit this place. Salt slush like that guy is walking in feels very unusual to the touch. I work at a place that harvests salt from a mine the salt is only a bi-product of the mineral they are after where I work. the salt brine when left to settle solidifies ( or crystallizes ) very quickly and has an unusual felling when walked on.

originally posted by: enament
a reply to: Soylent Green Is People

Very interesting, harvested since the time of the Inca, that might explain the patterning in the lake. The patterns don't resemble modern methods of salt harvesting. Thank you for finding that.

Another salt mine in Peru that was an ancient Inca salt mining operation -- The salt pans of Maras -- is an area that is still used today to harvest salt. This is a different operation, in that they create terraced ponds of salty water coming from a spring: 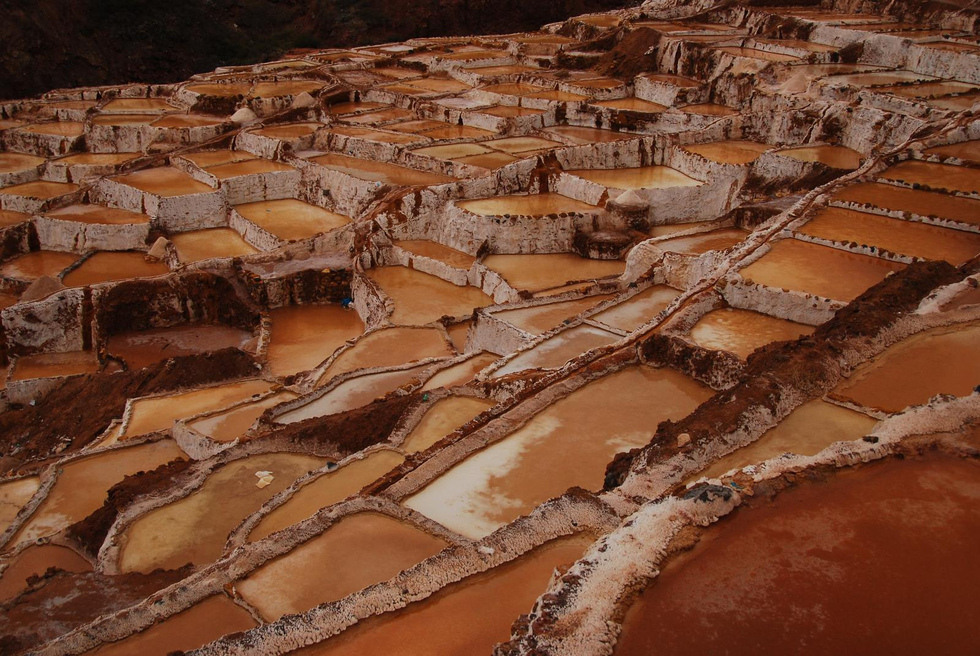 The salt mine in the OP's video is still being mined today, so I don't know how much of the patterns are from ancient mining operations or are from more contemporary operations.

Here is a contemporary salt evaporation operation in Spain: 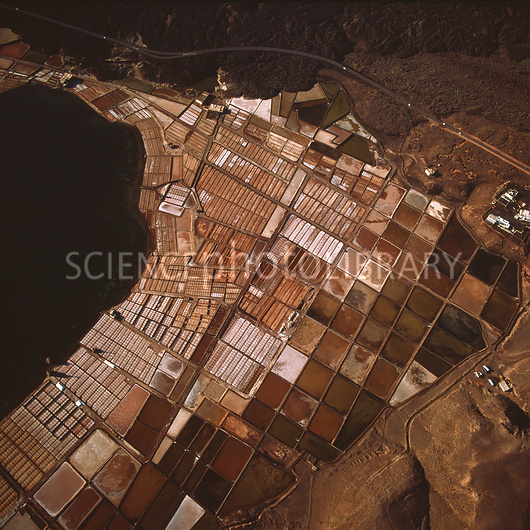 
Hmmm... this eerily reminds me of another thread from not so long ago.

Is this maybe an archaeological site also? Have they found any ancient artifacts in this salt mine?

I grabbed this pic from Bing maps it shows the obscured area in better detail than Google Maps. its really interesting their methods of gathering salt make patterns that if looked at from the air resemble pyramids. 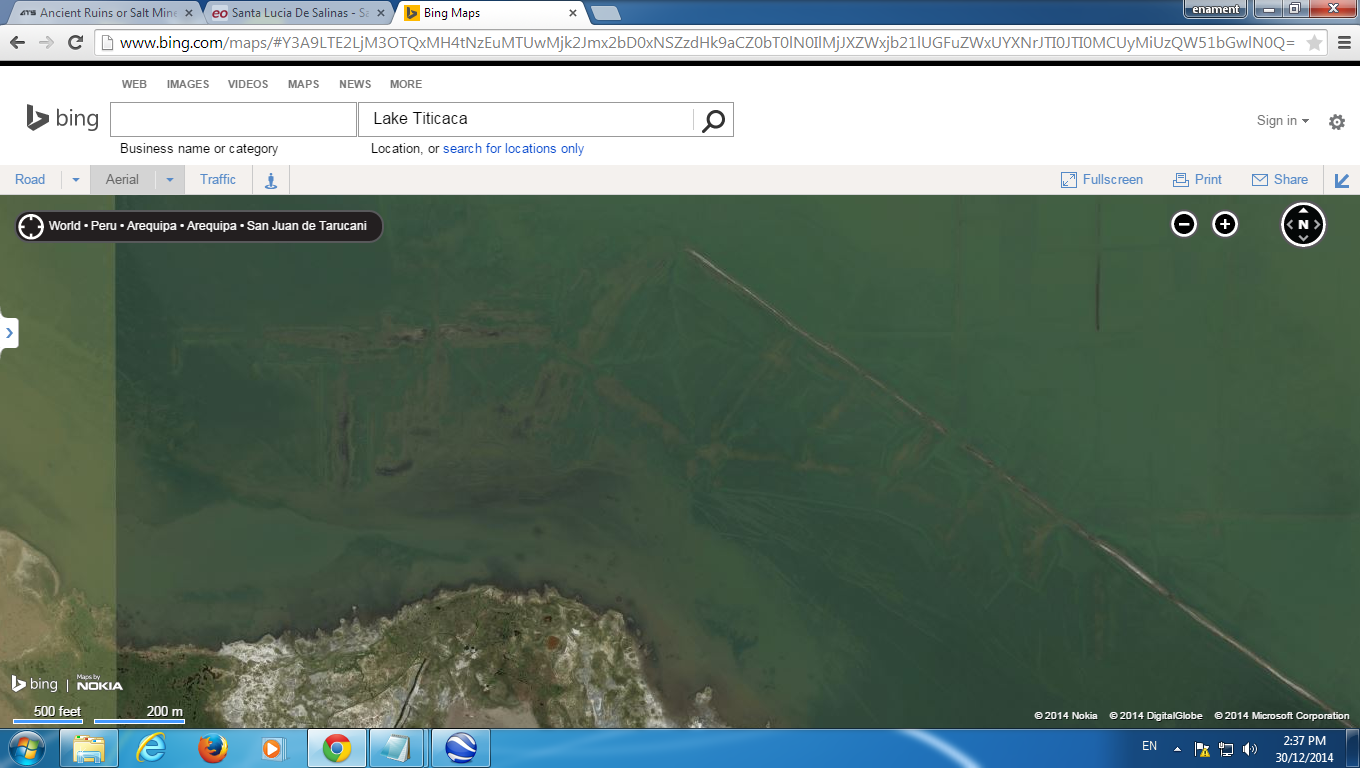 The next province over from where I live harvest salt with ponds,They open up the pond to the ocean flood it and then evaporate it over the summer and then harvest it.

It depends on what type of artifacts. Salt quickly deteriorates many things while wet, things like leather, cotton,aluminium,and steel. If the salt encapsulates something and then is dried it should last a real long time if oxygen doesn't get at it.