TORONTO — An ancient Egyptian coffin with strange and amateurish decorations has been revealed, shedding light on a tumultuous period in Egyptian history when the Persian Empire was in control of the region.

In 525 B.C., Persian King Cambyses marched into Memphis, the Egyptian capital, inaugurating a period of Persian rule that would last for more than a century. The Persian Empire was a vast entity that stretched from modern-day Afghanistan to the west coast of Turkey. Ancient texts say that the Persian kings deported Egyptian artists and used them for building projects in Persia.

The coffin bears a series of unusual features that are likely related to the Persian Empire's deportation of artists. [See photos of the ancient Egyptian coffin]

"Many of the best artists in Egypt were taken by the Persians back to Persepolis and Susa as POWs and war booty — you can see their work in those places. There seems to have been a dearth of masters for some time, so that fewer and fewer artists got proper training," Gayle Gibson, an Egyptologist and educator at Toronto's Royal Ontario Museum, told Live Science in an email.

Gibson presented the coffin at the Society for the Study of Egyptian Antiquities Scholars' Colloquium, which was held Nov. 13 to 16 in Toronto.

There are several odd features on the coffin that reflect the lack of knowledge the ancient artist had, Gibson said.

For instance, the deceased is depicted lying on a funerary bed, and the bed has a human-headed bird called a Ba. Flying over the deceased is a winged snake wearing a crown associated with the goddess Hathor. Below them are four jars bearing the heads of the four Sons of Horus, but the jars have a "goofy" appearance, Gibson said.

To an Egyptologist, this is a bizarre scene, Gibson said. "This is the only funerary bed I know of with a Ba's head," she told the Toronto audience, also noting that "we have a winged snake with Hathor's crown — very odd."

There are other oddities. The collar wrapped around the top of the coffin contains two creatures that look almost fishlike. The artist was likely trying to draw falcons, a symbol of the god Horus, but drew them very poorly, Gibson said.

A Mehen snake, a protective deity in Egypt, is also poorly drawn and actually stops at one point and starts in another, something strange for a protective deity. "The artist doesn't really understand the purpose of the Mehen snake," Gibson said. [Image Gallery: Egypt's Great Terrace of God]

Mike Sigler, a collector and Egyptian antiquities enthusiast who lives in Kentucky and now owns the coffin, sent a picture to Live Science showing that the ancient artist clumsily attempted to correct an error in an alternating pattern by scratching out an image of a scepter.

Although there is no longer a mummy in the coffin, its inscriptions say that it belonged to someone named Denit-ast, or Dent-ast, likely a woman. Radiocarbon dating of her coffin indicates that she lived at a time when her country was under Persian control.

Ancient texts tell tales of the deportation of Egyptian artists to Persia during this time. Diodorus Siculus, who died around 30 B.C., said that Cambyses, the conqueror of Egypt, transferred both precious metals and artists from Egypt to Persia.
news.yahoo.com...


Meant to post this couple days ago but for the site down thingy.
The Mad king of Persia was not alone in brain drain when it came to conquered the Mongols did it when they entered new lands we did much the same when we took Nazi and Japanese scientist for their brain power.

posted on Dec, 16 2014 @ 12:22 PM
link
The funerary scene shown here is remarkably weird. The deceased is shown on a funerary bed which has a human headed bird called a Ba. A flying snake wearing the crown of Hathor (an Egyptian goddess) is shown above the deceased. The four jars are the four sons of Horus. 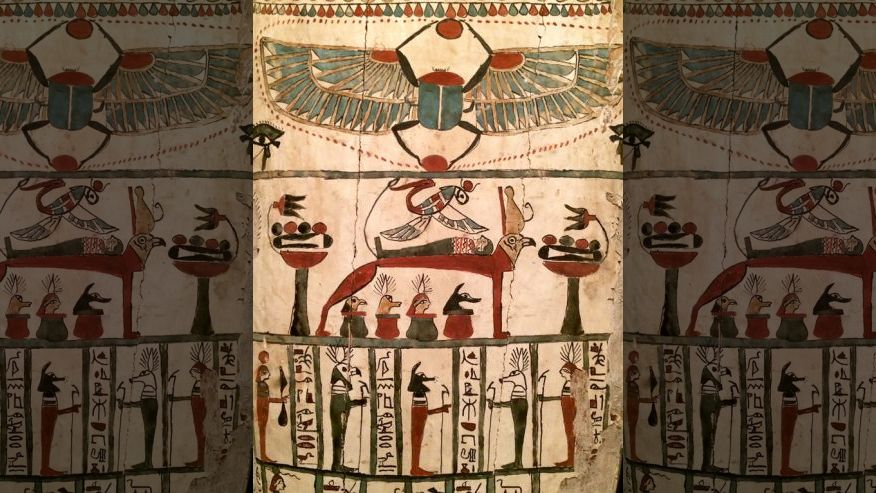 The article and the piece written to go with this picture states that the funerary bed has a human headed bird called Ba. NOTE the dominant presence of a winged scarab at top center.
Ba is a falcon body with a human head and is NOT in this depiction. The funerary bed has a bird head, not a human head. (Egyptians believed that the body was made of five parts and the depiction of Ba (Ba of Ra), was the carrier of the human soul.) Each one of the four jars (The four Sons of Horus), represent another part of the body.

[/align]The full-size coffin. Tests show that the wood is sycamore, a type commonly used in ancient Egypt. Some of the coffin’s unusual features include the imagery on the collar, which is supposed to have two falcons on its upper corners. In this case, the creatures are poorly drawn and look more like fish. The Mehen snake at the bottom of the coffin is also poorly drawn and actually stops and starts at one point, which experts say is strange for imagery of a protective deity. (Photo copyright: Mike Sigler)
www.livescience.com...
edit on 16-12-2014 by BushMaster16 because: fixed errors

Hmmm..an attempt at quite sabotage for folk s not wanting to be there,if so then it was surely a risky move.

posted on Dec, 16 2014 @ 09:50 PM
link
Is it possible the deceased couldn't afford better services from embalming to artistic decoration?