dreams from my father?

posted on Nov, 24 2014 @ 07:56 AM
link
while pursuing material on the "ye are as gods" sections of the bible (gospel of john, psalm 82 etc)
over here
i came across a new inroad into the "divine council" (ps 82)
in short; to me this quickly became like arguing about deputy sheriffs; ~who appointed them?

(but getting back to this "ye are as gods" thing.. and this "divine council" ..who are like deputy sheriffs)
(even though i am curious how units like malkitzedek & others fit into the picture..)
(..and this celestial lodge in the sky)
(but i digress... as usual)
after all that and some other stuff... i just left it all with the control unit... like i always do these days
because as you may well know.. if you try to make sense of this world.. you'll go crazy, right?
(or if you try to make a topic about what kim kardashian's bum REALLY means, it'll get 404'd & you'll be thought of as 'crazy', right?)

so.. then i had this dream the other night 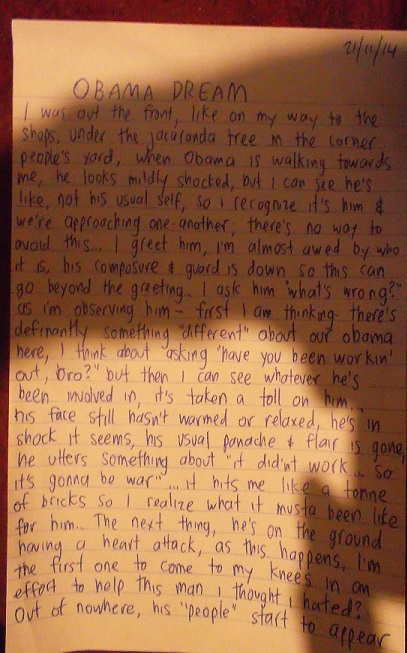 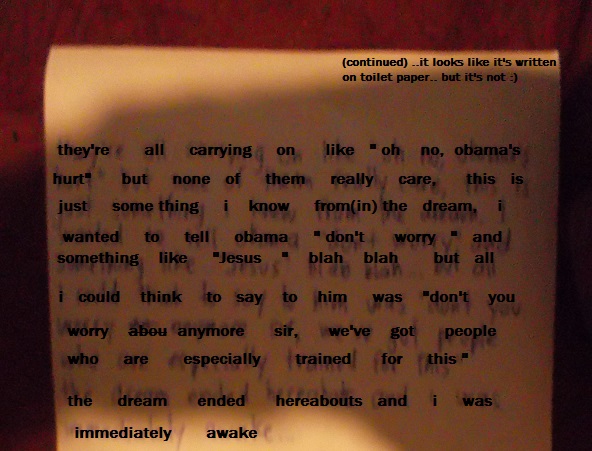 (sry- the 2nd pic came out blurry)
(i live in australia, the only way i recognize obama is like one of these "deputy sheriffs"..)
oh, and i'm kinda a bible-nut & really keen on jesus & "the foundation"..... 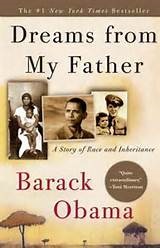 
..so that would seem to be the conclusion of my "ye are as gods" study, which led to "deputy sheriffs" (for reasons that'll probably remain known only to myself) which then led to that dream...? (and all this probably only makes sense to me.. but there was some stuff in there that someone might find interesting)
/shrug


..i don't think obama's going to have himself a heart attack (they all get special harkonnen heart-plugs, don't they?!) i just think he's an example of these folks who kinda see themselves as gods; building towers with no foundation, that kinda stuff

Dreams are as crazy as they are telling sometimes.
Thanx for the share on this.
It is definitely one of the stranger ones I've read...... Syx.

"are you properly integrating your sleeping life with your waking life?"
-written with texta on bedroom wall long ago


this might get a little strange now... just kinda rootin' around in the collective-unconscious thing here.. 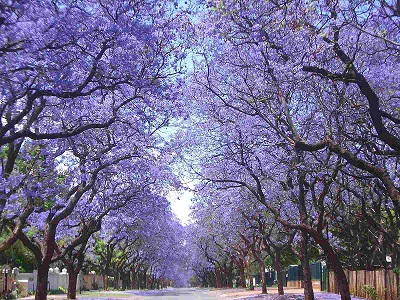 ^ some jacaranda trees
beautiful things... great pic..
how they're all assembled with purpose & glory like that..
..didn't happen by accident

Hypernyms ("jacaranda" is a kind of...):
rosewood; rosewood tree (any of those hardwood trees of the genus Dalbergia that yield rosewood--valuable cabinet woods of a dark red or purplish color streaked and variegated with black)

Holonyms ("jacaranda" is a member of...):
Dalbergia; genus Dalbergia (large genus of tropical trees having pinnate leaves and paniculate flowers and cultivated commercially for their dramatically grained and colored timbers)


(the parts i'm highlighting & italicizing (above) have specific import to me but are probably just meaningless dribble for the reader at home)
i'll pick that up another time.. tree's in the bible are complex to define, but carelessly i'd just describe them as geneologies.. then i'd try to expand it into cultivating a garden (or cucumber lodge, for any old-testament fans out there, לצעוק!)


Hypernyms ("rosewood tree" is a kind of...): tree (a tall perennial woody plant having a main trunk and branches forming a distinct elevated crown; includes both gymnosperms and angiosperms)


This type of tree also figured prominently into the plot of What Dreams May Come, a romantic/drama/fantasy film.


a quick search of buttonwood & rosewood didn't pan out (for anyone who may have noticed all the harbingers quoting from ezekial/isaiah during those 911 rituals memorials, but it's early days yet & easy to grasp at so many possible straws)

we will carpet-piss on this another time