posted on Nov, 17 2014 @ 10:40 PM
link
Found this article where it discusses the possibility that scientists will clone a modern day Wooly Mammoth using Elephant DNA. It's a short read so have at it ATS.

“Buttercup,” the mammoth in question, was found in Siberia last year, impeccably preserved in snow and ice. Excavators extracted vials of liquid blood from the carcass and now researchers at the South Korean biotech company SOOAM are testing it for a complete set of DNA. If a complete set can’t be found, scientists could map specific mammoth traits—like their tusks and hair—onto an existing elephant genome.

I don't know if this is a good idea. I think this has disaster written all over it. What says ATS?

anyone got good advice on what bow/arrow i should use

think ill get a clean kill with that lol

posted on Nov, 17 2014 @ 10:47 PM
link
Thanks for posting its very interesting! I personally don't like the idea of a genetically modified animal, its not natural and what if complications/ defects occur on the poor animal? I don't know alot about this so i don't know what could happen but it doesn't sound right too me.

Cloning an ancient beast comes with some ethical baggage, though. To start, an elephant would have to act as the surrogate mother. Birthing a woolly mammoth could damage and potentially kill the elephant, and it’s likely scientists would have to sacrifice several female elephants before getting it right. And that could be all for naught, as there’s no guarantee the mammoth would even survive for very long.

Sounds like animal cruelty too me how sad if they are willing to risk many elephants lives just too see if it can be successfull. It wouldn't even be a real mammoth anyway just a weird cross breed right?

Aren't mammoths big enough to totally demolish a jeep? As well, I'm pretty sure they run pretty fast too no way Grant and the kids can out run it. Besides elephants have one of the best memories out there. That thing would find a way to hunt you down and obliterate you.

I have to agree Mammoth Park would be a terrible idea, they are sentient beings and once they figure out we were likely the cause of their first extinction, they will band together to drive us to extinction.

They could probably bring the wooley mammoth back through generations of selective breeding, cloning is not necessary.

Did you consume meat today? Are you aware of how much more awful we are to the meat we eat, versus those we clone?

posted on Nov, 17 2014 @ 11:11 PM
link
It's typically science. Always trying to deny God yet become little gods themselves. They are pompous little men and women so full of themselves they spend millions upon billions experimenting on this kind of blasphemy.
I hope if they achieve their goal and the fake mammoth stomps them to death after driving those tusks right through their gizzard.
If only they'd use their gifts for good like clean water and food full of real nutrition, minerals and vitimins.

I guess this poses more than one moral dilemma . If complete DNA is found and the safety of the surrogate elephants could be guaranteed i would tend towards saying have a go . Cloning is still pretty much a new science . Perhaps if successful and enough different DNA is found , well who knows .Perhaps try to clone something like our Tasmanian tiger instead .
.
edit on 17-11-2014 by hutch622 because: bad gramma
edit on 17-11-2014 by hutch622 because: (no reason given) 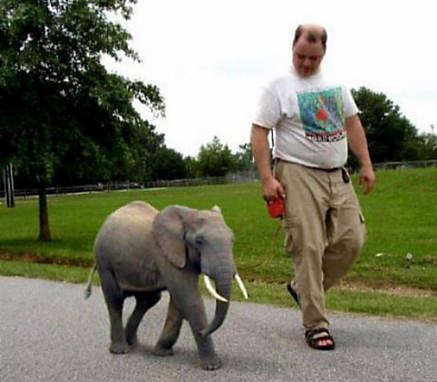 Imagine if it stopped growing there?

Interesting indeed. If stem cell research was once considered unethical, they either have to hide it, do it in a country that doesn't give a crap or wait until new research can guarantee the safety of both the mother and baby.

Maybe an artificial fetus of sorts?

That would not be a wooly mammoth. That would be something else that looked similar. Phenotype is not genotype.

posted on Nov, 17 2014 @ 11:42 PM
link
Rise of the Mammophant! I think it's important to note that what they're talking about is using DNA from an extinct species to create a hybrid. There's some good information in this PDF, Let's Make a Mammoth.

The more mammoth DNA they try to insert into the elephant genome, the harder it'll be though I wouldn't think it's implausible that they'll eventually create something that looks like a mammoth — but then what? There's two major ethical considerations I see here:

1. There will be a LOT of failures before they get a viable embryo that even makes it through the first weeks of gestation. If they manage to get one that survives through birth, it's a foregone conclusion that it will have bizarre genetic diseases. It's been difficult enough with the far less technically demanding process of cloning with fully intact chromosomes from existing species. Out of 277 attempts, Dolly was the first lamb to survive to adulthood and she only made it half of the average life expectancy for sheep. Cloning techniques have advanced considerably and Chinese scientists have reported success rates as high as 80-90% for pigs.

2. Assuming they overcome all of the technical hurdles and eventually end up with an animal that doesn't die minutes after birth due to something like abnormal lung development (see pyrenean ibex) then we'll have a single member of a new species with no real future outside of the lab and possibly zoo exhibition.

What is the purpose behind creating such an animal aside from refining genetic engineering techniques?
edit on 2014-11-17 by theantediluvian because: (no reason given)

posted on Nov, 17 2014 @ 11:46 PM
link
And surely all for the sake of making a buck by displaying the poor creature in some zoo or park where it can live unhappily ever after!

The idea is to use 100% Wooly DNA and an Elephant they will impregnate. If they do not have enough Wooly DNA then they will use elephant DNA to fill in the gaps. The more Wooly DNA the better, and easier it will be, not the reverse.

posted on Nov, 17 2014 @ 11:49 PM
link
I have mixed feelings. On the one hand, these are very large and potentially violent beasts (ever seen a rutting bull elephant?). Without an established structure of social norms, it may be a difficult beginning for these animals.

On the other hand, the natural world is the elephants world. In North America in particular, the loss of large animals has not had a positive impact on the environment. Most recently it was the bison, but in the past it was the mammoth.

I say that if the end goal is to release them into a rangeland....perfect. Let them do it. But if they are just to be baubles kept in cages, then don't.

No, but yes i totally get what you are saying and i agree there are some very inhumane abbotoir's out there, and alot of countries that allow disgusting treatment of livestock, we have strict guidelines here in Australia for livestock, thats why their was such outrage from us when videos emerged online of our livestock that was being shipped to other countries being mistreated in horrible ways. But imagine being an elephant and having this foreign body placed in you too grow, i mean how do they know it wont grow too fast and large for what an elephant can handle? Imagine the pain the animal would be in and it wouldn't be a quick death if it did die i imagine it would be pretty traumatic so i can't really look at them like they are the same thing because its not too me and what about the Mammothelephant what if its born all messed up and defected because of it? Or dies in the process because it just wont work that would just be horrible.

all that fur, and average temperatures go up!!
GAH!


I stand corrected, this horror waiting to happen must be stopped.

posted on Nov, 18 2014 @ 12:16 AM
link
Turns out a Wooly Mammoth is about the same size as a modern day elephant, so there shouldn't be any problem with an elephant carrying to term; I'm all for bringing back any extinct animals we can.

Take down all the fences in the midwest from Canada, the Rockies all the way over to Chicago and as far south as Oklahoma, move the people out, and bring back the bison, the giant sloth, the saber toothed tiger and the Woolies.