After a recent spate of hit and runs, Terrorist State Of Israel leader Mr.Netanyahu has ordered that the homes of "terrorists" shall be demolished!

The order was handed down during an emergency session on Thursday to discuss several violent incidents that have hit the city, the Times of Israel reports, citing Israel Radio.


The move comes almost a decade after TTSOI disbanded the idea, now to be reinstalled into Law!
There is no proof that this deters violence, on the contrary it was likely to seed more unrest.

In February 2005, the Israeli Ministry of Defense ordered an end to the demolition of houses unless there was "an extreme change in circumstances." That same year, an Israeli Army study found there was no conclusive evidence the practice deterred terrorism. The ministry at the time argued home demolitions were in fact counterproductive and could potentially incite more violence.


Yet another attempt at ignoring and defacing the Geneva Convention, Israel is expected to destroy the homes of those they deem "terrorists".

The practice is banned under the Geneva Convention unless “such destruction is rendered absolutely necessary by military operations."


In the meantime, Netanyahu has hit back at criticism of his treatment of Palestinians in their capital of Jerusalem...
Going as far as saying that it's actually the Israeli capital...
That's the Playbook coming in handy again for the Terror State, to whitewash History, & claim being the victim.
Also to reverse an argument in favour of themselves.


Meanwhile, on Friday Netanyahu lashed out at critics who said building over the green line – which separates West and East Jerusalem – undermined the peace process.

“Jerusalem is Israel’s capital and it is not a settlement,” the Jerusalem Post cites Netanyahu as saying during a meeting with the new European Union Foreign Policy Chief Federica Mogherini.

The Israeli PM said that the neighborhoods where Jews were living and building “have been in the hands of Israeli governments for the last 50 years.”

There will be no Peace agreement between the two States...


He continued that any such neighborhoods would remain a part of Israel under any peace arrangement, rejecting as “false” any claim that settlement construction lies at the root of the ongoing conflict.

The world is watching you Terrorists closely.

& the sooner you're brought to justice, the quicker we can find a truly Peaceful negotiation to put into place!

posted on Nov, 7 2014 @ 08:20 AM
link
Havnt they done that for God knows how many years, it does not seem to work how they keep saying but ofcourse if you look at it like freeing space for holy ppl to build homes then its seem to be "working". Those "terrorist" will not disappear tho.


The beatings will continue until morale improves.

A better description is reprisal.

re·pri·sal (r-przl)
n.
1. Retaliation for an injury with the intent of inflicting at least as much injury in return.
2. Forcible seizure of an enemy's goods or subjects in retaliation for injuries inflicted.
3. The practice of using political or military force without actually resorting to war.

Apparently they stopped in 2005 because it defeated the purpose of trying to stop violence, it actually caused more problems on the ground.


But they're a Terror State so they were always likely to go back to their old ways.

& you're right pal, it does just seem like another tactic of freeing up more space for illegal settlements in Palestinian land.

The tables are soon to turn, that's why Israel is rushing everything it does now, they know they haven't got long left taking the piss out of International Law.


Rome wasn't built in a day, but that's all it took for it to fall, so to speak.

Collective Punishment is another International Law being broken by this Rogue State Of Israel.

& War is a broad term.
Bombs are not the definition of War, its an Act of War.

Occupation is also an Act of War.
A bullet doesn't have to fly for War to be waged.
The War on Terror should have been waged against Israel.


But nevertheless that is what Jihad is for, to put it as you shared...
Jihad is "Retaliation for an injury with the intent of inflicting at least as much injury in return."


66 years of occupation, subjugation and repression. I was being 'nice'.

The "turn them to glass" motif has become rather tiresome...
& it's no less sickening that when I first came across that saying!

Surely you're smarter than that when it comes to input & discussion!

But you'd honestly like to see all the innocents on both sides turned to glass?
Can you see where your rhetoric has turned to spiteful vitriol!

posted on Nov, 7 2014 @ 10:09 AM
link
If they are going to tear down the houses of terrorist when will they be tearing down his house? When will they be tearing down the houses of the members of the Knesset seeing how most of the members keep wanting to wipe Palestine off the map.
will this be used against the "settlers" who run over Palestinians with cars?
When Cars Become Weapons: Settlers Deliberately Wound & Even Kill by Hit & Run Attacks
Settlers run over ten times the amount of Palestinians. But when a Palestinian runs over an Israeli he's a terrorist and his home should be destroyed.
edit on 7-11-2014 by buster2010 because: (no reason given)

I read that and thought, where are all the Israelis going to live.......

posted on Nov, 7 2014 @ 12:46 PM
link
Netanyahu home should be preserved for mankind, forever by turning it to glass in a fraction of a second.

Maybe the only reason the hell hole has not been nuked by Muslims is because of the Temple Mount but even that is being closed half the time as the jews beat people wanting to visit.

The word "Terrorist" you would think would stick on Netanyahu's lips as he order the destruction of yet another hospital and we can only hope that his days are numbered.


Settlers run over ten times the amount of Palestinians. But when a Palestinian runs over an Israeli he's a terrorist and his home should be destroyed.

They will just build over the top, as they've done so in the past.

Yes, i believe that this tactic is not beneficial at all. Maybe someone should try negotiation and proper dialogue, instead of these actions which serve no purpose but to increase tensions.

What a joke - the Anglo-Zionazi western military alliance are the terrorists, not the acutely oppressed Palestinians currently living in the world largest prison.

If you want a picture of the future of the region (under Zionism), imagine a boot stamping on a human face forever - Orwell

And yes, start with tearing down the Knesset and end with Bibi's house. 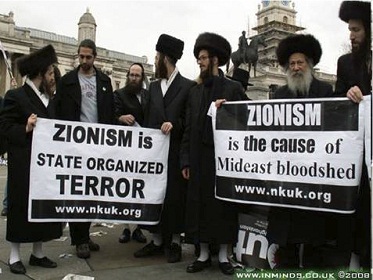