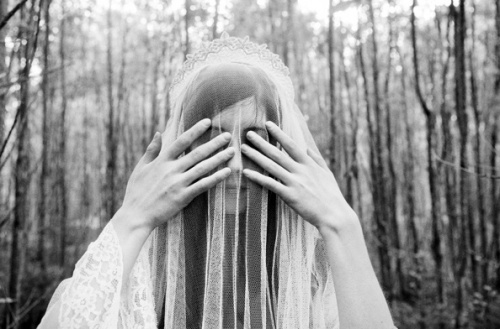 Creepy picture from Indulgy because a real corpse bride is really gross.

I'd never heard of a Chinese "Ghost Marriage" before an item popped up on my feed a few minutes ago but after a little reading, it seems these sort of postmortem nuptials are not restricted to Chinese culture as similar practices are known from areas of the Sudan, India and elsewhere. In any case, a "Ghost Marriage" involves a marriage ceremony in which either the groom, bride or both are deceased. Following a Chinese "Ghost Marriage," the newly married couple are re-interred together (that's some honeymoon). According to the Wikipedia page, there are quite a few reasons why a "Ghost Marriage" may be performed, including at the request of the deceased who is having trouble finding a mate in the afterlife (no Internet dating sites apparently). Here's some of the more typical reasons given in the Wikipedia page:

Chinese ghost marriage was usually set up by the family of the deceased and performed for a number of reasons, including the marriage of an engaged couple before one member's death, to integrate an unmarried daughter into a patrilineage, to ensure the family line is continued, or to maintain that no younger brother is married before an elder brother.

In the latest alleged instance, Shanghaiist reports the accused are said to have retrieved a woman's body from a grave in Shandong province three months after her death and sold it to a middleman for about $3,000. The middleman kept the body in a hospital's mortuary before selling it to a family in the city of Wuan for roughly $6,200. "Years-old carcasses are not worth a damn, while the ones that have just died, like this one, are valuable," says the group's supposed ringleader, identified only by the surname Wang.

According to the article, the practice, which is now illegal and punishable by up to 3 years in prison, dates back to the 17th century BC in China and is most frequently carried out these days to provide brides to young men who died bachelors. I'm assuming that unless there are also "Ghost Divorces," the prospective bride is supposed to have also died unmarried. As the quote from Mr. Wang suggests, the less decayed the corpse, the more valuable it is and this has no doubt — along with laziness and sociopathy — even led to instances of murder! From a related 2007 Newser article:

The gruesome tradition of arranged marriages for the dead died out after the communists took power in 1949, but it's said to be making a comeback. The killer said he origninally tried grave-robbing, but found murder to be easier. Several of the women had been hired as housekeepers. "Killing people and selling their bodies was easier than stealing bodies from graves," he said.

posted on Oct, 30 2014 @ 03:18 PM
link
Is there a ouija board involved when they're doing their vows? Is Zhong Kui the one that marries them? I'm dying to hear about the divorce procedure, someone is sure to get stiffed on the division of the assets.

There is so much wrong with this on so many levels. Not to mention a whole host of puns, bad and off color jokes...

BUT it's their Culture!

posted on Oct, 30 2014 @ 04:51 PM
link
Interesting that this should come up here now. I just got done proofing for an entry in one of our newsletters. It was advertising a YA Novel called Ghost Bride about a girl who is offered a marriage for the young, deceased son of one of the island's wealthiest families.

However, in this version, the bride is very much alive and maintained in honor by the groom's family. They marry her to placate the restless spirit of their son.

This book is written by a Chinese author drawing on her cultural heritage, so are all ghost marriages done between corpses or were some as described in this book? Between a living person and the ghost of the deceased?

Interesting bit of synchronicity! Yes, some of them were/are between a deceased person and a living person. It's mentioned in both the Wikipedia page and also in in the Shanghaiist article the Newser article used as a source:

Ghost marriages are an ancient custom, but instances of the practice being carried out are occasionally still reported today. There are generally two types of ghost marriages: one which is held between two deceased people, and the other between a dead and a living person.

Traditional belief has it that a dead person who is buried single and alone in a grave brings bad luck to his or her descendants. Therefore, some bereaved families seek a corpse to hold a ghost marriage for the deceased.

I could buy a living wife for half that price.

Horrible but funny (and true)!