posted on Oct, 27 2014 @ 09:08 AM
link
So...I have been semi obsessed for the last week or so on the prospect of Paul Elio's dream of Elio Motors. I really want an Elio and to share this with ya'll here at ATS. 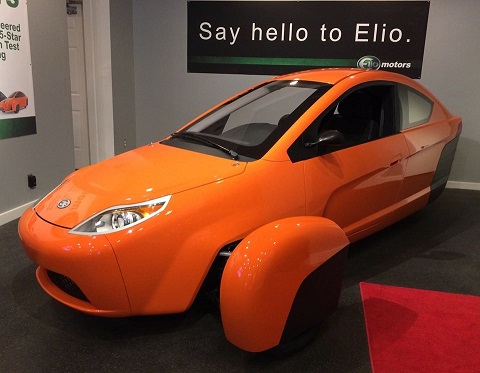 Paul Elio has a dream to change the way we commute. His solution is a 3-wheeled, 2 tandem seat car that gets up to 84 mpg at a MSRP goal of $6800 USD. He is packing a lot of promises in this small price tag. A top safety rating with fully reinforced steel roll cage, side impact beams, front and side air bags and 3 disc ABS breaks. Power windows, heat and AC, radio, manual or automatic transmissions. Front wheel drive 0.9L 3 cylinder engine rated at 55 HP and 55 LB-FT of torque capable of 100+ mph and a 0-60 time of 9.6 seconds. Sounds too good to be true right? I sure hope it becomes reality.

The three wheeler is projected to feature heater, defroster, air conditioning, power windows and door lock, stereo, two person seating capacity (one in front, one in back), three airbags, a reinforced roll cage, side intrusion beams, seat belts, windshield wiper, stability control, and ABS. Company executives project the vehicle will receive a five-star safety rating. Fully enclosed like a standard automobile, the vehicle's three-wheel design falls under the U.S. government motorcycle classification. The company has successfully lobbied, in most states, to alter regulations that would otherwise require drivers to wear a helmet and, in many states, to remove the requirement for operators to have a motorcycle endorsement on their driver license.[2][3][4]

Elio Motors is based in Phoenix, Arizona and is preparing to manufacture its vehicles in Caddo Parish, Louisiana, using a portion of the former General Motors Shreveport Operations plant.[5] The company projects employment up to 1,500 at the Shreveport plant, with the initial hiring of 800 beginning in the second quarter of 2015.[6] Elio reports that 90% of the parts used in the vehicle will come from suppliers in North America. Production is projected to begin in the third quarter of 2015.[6] The company has begun taking reservations with a deposit on its website; as of September 1, 2014, more than 33,000 had been made.[7]

So far Paul Elio's determination has overcome a lot of major hurdles and things are looking bright for this US automaker startup. The two things that scare me is:

1. Paul is planning on selling these in the same fashion as Tesla and we all see the BS that Tesla is dealing with from the states run by the "Big Oil" companies trying to squash them from getting a small piece of that ridiculously huge, big oil profit pie.

2. The motorcycle vs car, laws and regulations. If Paul can get all the lobbying squared away where you don't have any motorcycle regulations on the Elio then that would expand his buyer demographic exponentially.

I for one would buy and Elio in a heartbeat. I have always been drawn to the small/efficient vehicles, but always deterred buy the price. Take the SMART car for instance. It's double the price and half the MPG of the Elio. Not a big selling point for me. With automakers achieving those higher MPG numbers on the daily I can get a car twice the size of a SMART with dang near as much MPG for the same price. It's a no brainer. Why buy half the car for the same price. Now I can make that sacrifice WITH half the price with it and that makes logical sense to me.

So ATS, would you buy an Elio?

Disclaimer: Please go easy on me as this is my first topic.
edit on 10 27 2014 by SgtHamsandwich because: Spelling :/

posted on Oct, 27 2014 @ 09:21 AM
link
I applaud the man for his innovation and dream, but I don't think my dual 12"s could fit in that... not to mention I would most likely find myself either in a snowy ditch or crumpled into an orange heap after an accident with a bicycle. I think this thing would be practical for summer city driving, but out here in the country, we need something with go, especially when the white stuff starts flying. I would also have to wait and see how difficult it would be to fix or modify one myself. Given that analysis, I can't say I'd be buying one.

Ive seen these... I am fairly fascinated as well. I believe at that price point that this can be a successful seller in america.

Personally Ill just stick to my motorcycle when I want to be green. But this car has some obvious advantages over a motorcycle.

posted on Oct, 27 2014 @ 09:24 AM
link
it looks kinda cool, but it seems to only seat one, and i guess there is not much space in the trunk, and i don't know about stability with only one wheel in the back...
so i will pass, love the idea, and the design is pretty neat, but i would need one of those storage thingies hooked to the back just for a trip to the supermarket!

Yeah, probably not a good buy for the folks of a claustrophobic nature.

I did however have the question of putting my 3 year old daughter in the back and I ran across an article a few days ago that I cant find again that showed a full size toddler car seat in the back and it fit nicely.

No, it seats two. However not much trunk space. The back seat will fold down for more storage though.

Paul is marking this as an "AND" vehicle though. Geared mainly for those traveling alone to and from work a lot. I myself drive close to 60 miles at least 3 to 4 days a week to work. Would be awesome for me. I could see a lot of benefit for college kids as well. Easy way to get around a clustered campus and still have plenty of room for you books and keep them secure. Save tons of money on gas a well.

I believe at that price point that this can be a successful seller in america.

I couldn't agree more. At the proposed price point, the Elio becomes so much more obtainable to a much larger group of people in America, or the world for that matter, in today's terrible economics.

I'm too skeptical minded to chance sending them money for a reservation. I need to see, touch, and test drive one before coming off any cash. Paul definitely has Henry Ford dreams, but in today's governmental oversight in one hand and big oil/bank control and influence in the other hand. Paul has 100 fold the hoops to jump through then Henry had a century ago. My hats off to him though for how far he has taken this dream so far.

Again, it just sounds too good to be true. I will just sit back and wait patiently in hopes that this happens.

posted on Nov, 3 2014 @ 01:07 PM
link
This shows several pretty good sized guys fitting in the car. Although I've seen one of their vids where a 6' 4" guy got out of the back seat, I still shudder at the thought of riding in back... It's not just this car/bike, I was claustrophobic in a Nova. When in the middle of something completely unplanned I want either a door of my own next to me or a window that I stand a chance of crawling out in short order.

The fact that they used the early 1980s GEO Metro engine as a starting point made me sit up and take notice. I've owned a GEO '82 and Chevy Metro '98 (automatic). The five-speed '82 put the other to shame as far as mileage.

The Elio looks like it would be a blast to drive.

Something they've just added to their FAQ is a unique idea regarding financing. I'm not a fan of credit cards, but they plan to offer an alternative to traditional payments. With the Elio card, every time you use it to put in fuel an equal amount is charged toward paying off your car. Someone with the willpower to handle this wisely could really benefit from this.

posted on Nov, 8 2014 @ 09:11 AM
link
a reply to: CornShucker
I could see that type of financing being abused quickly! If I put 10 bucks into my gas hog dodge dually,it pays 10 off on the car?There would have to be a limit,either total $,or gallons per week,or something!

originally posted by: blkcwbyhat
a reply to: CornShucker
I could see that type of financing being abused quickly! If I put 10 bucks into my gas hog dodge dually,it pays 10 off on the car?There would have to be a limit,either total $,or gallons per week,or something!

Like I said, it would take will power and you'd have to stay on top of where you were payment-wise. I honestly know someone who bragged and her and her husband finally doing so well that she only balances the checkbood every 4 to 6 months! WTF??? That is NOT being an adult.

I'm also surprised at all the receipts I get at the gas pumps from others that can't be bothered with waiting for it to print. (If I were on something like the Elio card, I'd have to scan my receipts just for peace of mind because almost ALL of them are thermal print now. Wait a few months and you'll have nothing but a blank scrap of paper.)