The Navy's First Sea Base Gets Tested During Exercise Pacific Horizon

posted on Oct, 26 2014 @ 09:53 PM
link
So, it appears that the US Navy is embarking upon something called "Sea Basing," basically having Bases at sea for cases of natural disaster or to: "facilitate the conveyance of an amazing amount of gear, vehicles, personnel and supplies in an incredibly short amount of time..."

The US Navy's first giant Mobile Landing Platform, basically a semi-submersible highway interchange artery on the sea, has been put to the test for the first time. Exercise Pacific Horizon saw the tanker-sized ship being used to convey outsized cargo from a cargo ship to the shore via hovercraft as part of a mock natural disaster response.

I wonder if thhis has anything to do with Sea-level rise....? Is the Navy being forward thinking and preparing for what is to come?

It is all about readiness for any situation. Yes they can be used to help with natural disasters but they could also be used to storm a beach just as well.

posted on Oct, 26 2014 @ 10:30 PM
link
a reply to: lostbook
It's not the first sea base as the article title leads one to believe, though I am sure not many people realize that .... it is the first, as the article notes "giant Mobile Landing Platform" though.

This, Ocean-6, was the first to my knowledge ... posting for a little FYI and to further the knowledge, I know you, yourself, did not state the above. 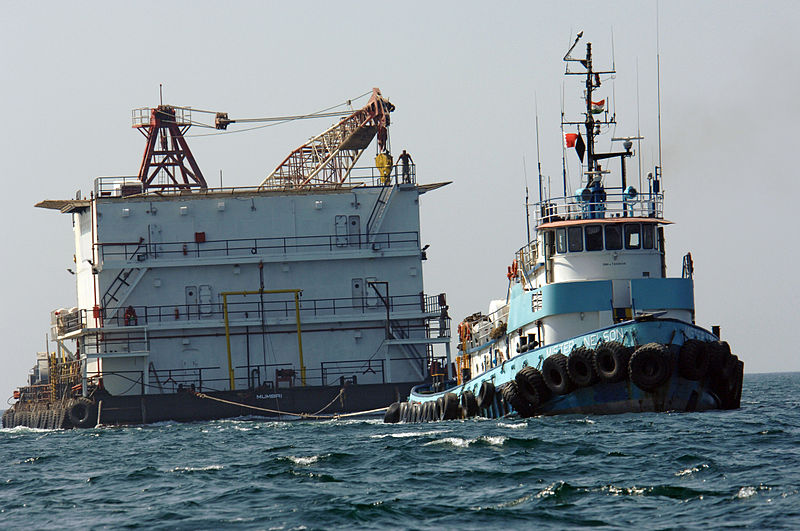 The chartered barge Ocean 6 being towed by tug boat Dona II in the Persian Gulf. The barge features all the information and coordination capabilities of a coalition warship's Combat Information Center. Ocean 6 will act as a command and control platform for personnel assigned to protect the Khawr Al Amaya Oil Terminal and Al Basrah Oil Terminal.

I use to communicate with these guys every day ... ALL DAY, EVERY DAY in 2007 when Iran took British sailors hostage for "crossing into Iranian waters" ...

posted on Oct, 26 2014 @ 11:15 PM
link
Those aren't new, i have seen those years ago. Not sure what it was used for at the time. I can see it as useful to them though. What gets me is the wording BASE. It's a cargo thing. The word BASEis being used for a reason. I bet it is a way to claim and cut off territory where they choose for whatever political reason they deem necessary.

Seafloat, Mobile Advanced Tactical Support Base (MATSB) was one of them.

here's a wiki, cause it's fast.

A Mulberry harbour was a portable temporary harbour developed by the British in World War II to facilitate rapid offloading of cargo onto the beaches during the Allied invasion of Normandy. A pair of Phoenixes at Arromanches Two prefabricated or artificial military harbours were taken in sections across the English Channel from Britain with the invading army and assembled off the coast of Normandy as part of the D-Day invasion of France in 1944.[1]
Mulberry Harbour

posted on Oct, 27 2014 @ 02:34 AM
link
In a disaster situation i'd imagine having a ship full to the brim with tents/water/long life food/comms and medical gear is just whats needed as while the ship is slow its in the area and thus by the time the ship is ready to offload the cavalry so to speak will have arrived and be ready for receiving the goods and for a sea based invasion its prerry much the same but extra ammo and stuff thats too heavy to carry in a large enough quantity to be able to make a swift land attack while getting air support

but for a military ship if that goes anywhere near any hostile country without permission they could think the US is about to drop a few metric craptons of freedom on them and things could get a bit nasty!

Didn't the British utilise a container ship during the Falklands war for their harriers . Could be wrong .

originally posted by: hutch622
a reply to: hounddoghowlie

Didn't the British utilise a container ship during the Falklands war for their harriers . Could be wrong .


I think it was for their Chinooks, but the 'argies' sunk it with a french Exocet missile, Then Mrs Thatcher went over to france and 'had a go' at Mitterand, and got the missile shut down codes from him, or so the story goes.

Interesting post. As a former Marine that spent a great deal of time in MEU/SOC operations I find this very interesting. I wonder what, if anything, will happen to the Maritime Prepositioning Ships of my time. Or if they have been mothballed by now.

This platform would be great for dealing with multiple missions, in multiple geographical areas precluding the need for portside servicing. I wonder though, whether this ship/docking platform will be deployed with UNREP ships or be a free-standing ship? There is no mention about that in any of the articles I have read.