5,500 Year-old Circular Pyramid in Peru is Evidence of *new* Oldest Civilization in Americas

What gets me every time is that when I look around me at today's cities with their skyscrapers and layouts, we never seem to manage the elegance the ancient peoples did.

I appreciate that we don't see the hovels that scratched the surface dirt only of the poorer peoples but that elegance was so well balanced and drawn out. I do wonder if the quality of life before the blood letting which offends our standards today became a part of their lifestyle? I presume that it was climate change or warfare that interrupted their elegant construction. Its wonderful that we can look around the world to see these ancient sites and remind ourselves of a time when beauty in construction was an important consideration.

I do wonder with the circle structures if they were the linkage mechanism between man and the cosmos as every culture gazed up at night and had its mythology steeped within the cosmos. I suspect in Peru the sky could be seen easily and clearly whilst at other cities where the jungle intruded or other factors happened that cut out a lot of the sky in lower sited cities they may have included any circular constructs away in a clearer part of the landscape.


Always good to see others that share an interest in such findings. It reminds me of the Cuicuilco pyramid in Mexico. 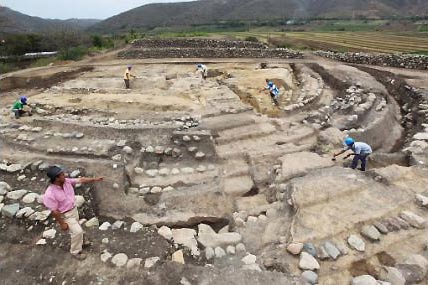 It's age has been contested by many due to the fact that it was partially covered by Volcanic ash from several eruptions. Some dating back over 8,000 years ago. Although the age of the one in Mexico is contested by some this new find in Peru isn't. I think there may be a time coming soon that we will have to reevaluate our present understanding of just how far ancient cultures and maybe even civilizations really do go back in the New World....

This site, is commonly accepted as among the oldest in the Valley of Mexico. Parts of the large and complex site are buried by ash from volcanoes as recently as 300.A.D., while other parts are buried under volcanic ash that are said to have been dated as 8,000 years old. Most archaeologists do not support the 8,000 year old date. One eruption is actually carbon dated at about 30 AD. 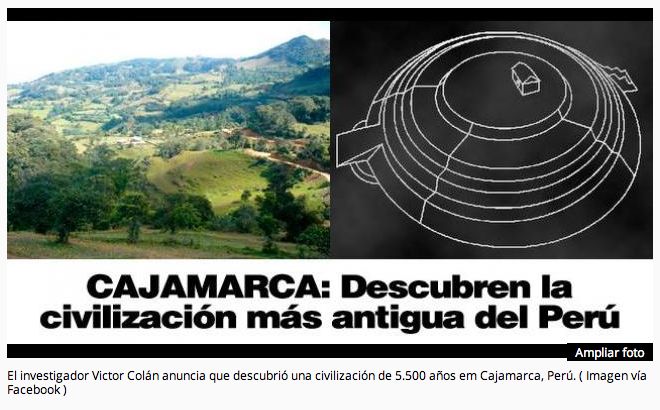 There are thousands of un-excavated mounds in the vicinity of 'fertile crescent' (southern Turkey, northern Syria and Iraq) - a century of work there if you add in the associated regions, multiple centuries.

I have been to Turkey, too. Great archaeology there!

posted on Oct, 26 2014 @ 02:53 PM
link
I've traveled through Peru several times and have flown over parts of it too. There is so much yet to be discovered in that country. A simple road trip around the land that surrounds Cusco shows many old ruins within eyesight of the road.

posted on Oct, 26 2014 @ 07:46 PM
link
I am 2 miles away from Cuicuilco Mexico and the base is covered by lava from the Title volcano, last eruption was 8500 years ago. A lot of dates do not conform with the establishment so they are "fixed" same thing in Valsequillo Puebla where there are tools 30000 years old that were lost by autorithies ....

Great find, one day evidence will be overwhelming and history will need to be rewritten...

originally posted by: kix
I am 2 miles away from Cuicuilco Mexico and the base is covered by lava from the Title volcano, last eruption was 8500 years ago. A lot of dates do not conform with the establishment so they are "fixed" same thing in Valsequillo Puebla where there are tools 30000 years old that were lost by autorithies ....

Great find, one day evidence will be overwhelming and history will need to be rewritten...

I think you mean the Hueyatlaco site which is near Valsequillo and those stone tools were dated 250,000 years ago in a very disputed analysis.

You seem to be making a claim that the stone tools from that site are lost - what is your evidence for that?

Anyhoo, back to reading the story...

originally posted by: SlapMonkey
Pardon the attention to detail, but shouldn't this be considered a step cone, not a step pyramid?

Anyhoo, back to reading the story...

yes, the term 'circular pyramid' made me smile

originally posted by: skalla
Bar the continental/philosphical divide, i guess one could argue we should call it a Stupa..

originally posted by: RedParrotHead
If this is in fact 'a cone" then we should really explore the Remulak connection.

I was thinking to myself, "Remulak, why does that sound so familiar?"