U.S. troops assisting in Ebola mission may be quarantined


Washington (CNN) -- In an unprecedented move to protect U.S. troops that might be exposed to Ebola, U.S. military commanders are being given the authority to quarantine troops for 21 days at a Defense Department facility where they will be monitored for signs of the disease and treated if they do contract the virus, a Defense Department memo explained.

Considering the Executive Branch and the CDC already dropped the ball, how exactly is using our military as lab rats going to solve the problem?

How can Obama justify NOT stopping air travel from these infected countries, YET put our men and women in uniform in harms way of an enemy that not even the medical community has any kind of firm handle on?

These are the kind of things that point to the conspiracy of depopulation. Certainly the government cannot be this stupid can they?

Until we better understand how this thing is spreading, this will be the new protocol. I am surprised it took this long for such a decision to be made. Maybe they'll finally get around to banning flights next.

posted on Oct, 16 2014 @ 11:22 AM
link
Military medical care is usually pretty good, its the VA that drops the ball. Something to be considered is to send possibly exposed troops back by ship. Set the route up so that it takes 21 days to sail back. By the time the ship hits the pier, quarantine over.

Very difficult task. Although when you sign up you sign up for whatever threats are there. But with that said I wouldnt begrudge any that stepped down. I want to say one more thing that probably hasn't been published...if you asked them soldiers....who wants to go...I bet nearly 100% said yes. If there is a god I hope they are with them and hope they can help.

here is your answer for that ...


The chairman of the subcommittee that will be holding a high-profile hearing on the Ebola crisis today on the Hill said the CDC director told him that the administration fears a travel ban from affected countries would hurt fragile West African economies.

People in the Western World need to know what’s happening here in West Africa. THEY ARE LYING!!! “Ebola” as a virus does NOT Exist and is NOT “Spread”. The Red Cross has brought a disease to 4 specific countries for 4 specific reasons and it is only contracted by those who receive treatments and injections from the Red Cross. That is why Liberians and Nigerians have begun kicking the Red Cross out of their countries and reporting in the news the truth. Now bear with me:

It's a possibility. I have some co-workers in Nigeria that are saying this Ebola crisis is being hyped up and is more lies and Propaganda.

Reason 2: Sierra Leone is the World’s Largest Supplier of Diamonds. For the past 4 months they have been on strike, refusing to provide diamonds due to horrible working conditions and slave pay. The West will not pay a fair wage for the resources because the idea is to keep these people surviving on rice bags and foreign aid so that they remain a source of cheap slave labor forever. A reason was also needed to get troops on the ground in Sierra Leone to force an end to the diamond miners strikes. This is not the first time this has been done. When miners refuse to work troops are sent in and even if they have to kill and replace them all, the only desire is to get diamonds back flowing out of the country.
Of course to launch multiple campaigns to invade these countries separately would be way too fishy. But something like “Ebola” allows access to an entire area simultaneously…

Shock Claim From Ghana - Ebola Is Not Real

This the main reason. Have a look at the others though because it paints a picture more reminiscent of what is really going on and why they are going on and on about Ebola.

Also the constant media hype about Ebola is diverting the attention away from Syria.

Washington’s primary objective is to topple Syrian President Bashar al-Assad and not to destroy the ISIL terrorist group, a freelance journalist says.

US Concerned With Getting Rid Of Assad!

And Turkey is at this moment attacking Syrian positions and Military with tanks to help ISIS gain a foothold within the Syrian infrastructure.

See what I mean? At the moment in the media it's Ebola, Ebola, Ebola and nothing about the real mission in Syria which is the overthrow of Assad. Thousands are dying in Syria and all the media can utter is Ebola! 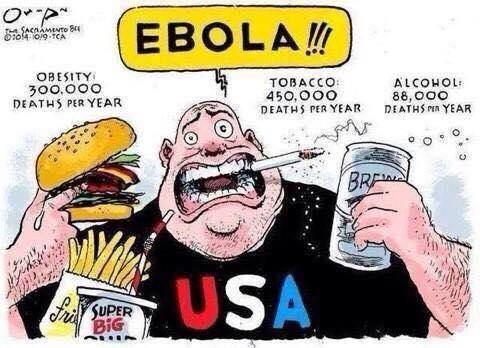 Good Point! I still don't know why our government would subject our troops to this deadly virus. The CDC is really dropping the ball on this whole Ebola things. Heads need to roll.

That's what I'm saying, smh...everything is done so backwards that I can't believe it still surprises me.

I think it is impractical to quarantine 21days worth of passengers. You would need to create a temporary town of several 1000 people in the vicinity of the airport. Plus there need to be the resources to set up a temporary town or camp like this and these countries don't have the skills or resources to perform such an undertaking.

What is encouraging is that a quick test for ebola is being developed in the USA. See

These troops are really brave. I hope they help make a big improvement in the situation.

The whole thing about Ebola not being real and only can be contracted through this "vaccine" is puzzling??? However, some good points were made that certainly should not be overlooked. Americans are greedy AF so if there's no workers to mine and supply diamonds to De Beers and such then that's a big problem and to that I say "mine your own damn diamonds!" Greedy ass corporations who use and abuse the less fortunate. Disgusting.

So if they quarantine all the guys together and one spreads the disease to the others, do they have to quarantine the other soldiers for another 21 days again. They could be quaranteened for a year. Instead, they will just send all the seemingly well ones home if someone gets sick. This way they will spread it all over the country.

In the UK the troops going out on ships will be disallowed shore leave, which is fair enough, albeit a frustration for the crew.

If this had been followed to begin with, with healthcare workers in Africa, and if flights had been stopped we wouldn't be in the freaking mess we're about to be in.

You know as much as I do but this is not what they are trained for. Pisses me off.

You are so right! I think anyone that has been exposed should be quarantined.

I have been looking for something behind the real story, TPTB are going way out on this one not only diamond's but oil to.

Another point to be made is the big pharmetucial company's do not have a cure and they have had plenty of time to do so. They have sent all they have to Africa. A lady on TV said they were out and it would take time to grow it? WHAT? I guess there are not enough sick for them to profit!

There is another thread along the same lines MONEY! I will find it and link it here.

Maybe an apples and oranges thing.

With the military you can lock 'em up for the duration almost anywhere. Give them MRE's and an X-Box and call it good. Different mindset.

With civilians? Oh no. There would be litigation all over the place. The press would be getting hernias trying to get enough cameras on location. Congressmen stumbling over each other trying getting face time on the scene. Rose Garden conferences.