Toronto's Race for Mayor : After Olivia What? 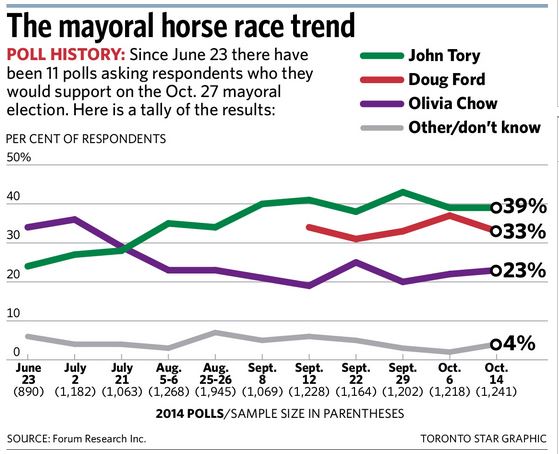 The most dangerous factor facing Doug Ford at this point is a potential shift in support by people backing Olivia Chow over to John Tory on election day in an "anybody but Ford" act of desperation.

Olivia's supporters, who are contemplating such a move, are, in my opinion, misguided. They have been of the belief that Olivia can deliver a people friendly agenda at a time when critical infrastructure investments must be made.

Many Chow supporters could be mistaken in believing that voting for Tory would be a substantially "agenda neutral" act, from their point of view. These people should be mindful of the fact that increasing the city's debt load by 2.7 billion dollars, as John Tory has pledged to do, is not conducive to conducting a people friendly, services oriented administration in the long term and is certain to increase the voter's tax and user fee burden.

John Tory and his very interested endorsers in the federal and provincial governments want Torontonians walking "up the down escalator" indefinitely, trying to recoup the costs of a very disadvantageous deal he has pledged to negotiate between the city and the upper levels of government to fund SmartTrack.

On the other hand, obtaining money for necessary expenditures by finding efficiencies, accompanied by more moderate increases in the city's debt load, as Doug Ford would like to do, may, in the final analysis be a shorter route to a city administration that is able to provide sufficient services in a sustainable way.

Looked at in that way, in my opinion, John Tory is further to the right on the political spectrum than Doug Ford. John Tory wants to deliver the taxpayers of Toronto and their money into the hands of the federal and provincial governments.

Doug Ford wants to keep as much Toronto money in Toronto as possible. If you can't have Olivia, Doug Ford makes more sense than John Tory, as an alternative.
edit on 16-10-2014 by ipsedixit because: (no reason given)