Statue on Mars: A reclining god, a king, an ancient hero? 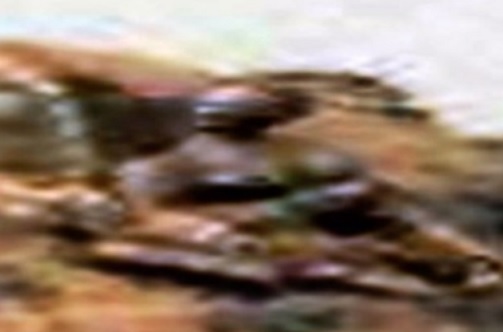 A monumental discovery of huge importance, has been found by the mars Curiosity rover.

The object, which appears to be a statue, can clearly be seen at the top of this Martian mound.

As you can see in the image, the object has humanoid features, and appears to be a female, or possibly a male with a heavy athletic build.

When we apply the correct colors, replacing the ones that NASA has deliberately bleached out, we can see just how remarkable this relic truly is.

So, is it just rocks or could this be something?

UFO Sightings Hotspot reported Oct. 11 that not only does the statue appear to be humanoid, at least in the areas of head and torso, but that it also resembles an nearly 2,000-year-old statue of Hercules found in modern-day Iran. To add to the oddity of the figure in the image, its setting on the Martian hillside is analogous to the Iranian statue, which is carved into a mountainside.

feel free to delete this mods if it's already been posted.

What am I looking at?

The image is kinda distorted. Why can't it be a pile of rocks?

S&F for the material, but I just don't see it - well, more accurately, my imagination can see anything in this image.

I cant deny what it looks like it COULD be, but blurry photos I dunno......

Also why do they automate their voices in so many of these now? Why dont they just talk like normal people to narrate their vids?

the problem is from certain angles with light play rocks can always look odd...but add in blurriness and you get anything

thx for posting though..id rather have a fun look then nothing at all

to me this could

probably be a hoax.

Good thing the image is so bluuried…

I could squint my eyes at some rock formations in Utah and think the same thing. If theres a Mount Rushmore on Mars, fine.

Fuzzy pics of rocks are just that.


A reclining god, a king, an ancient hero?


Or a collection of rocks + pareidolia + wishful thinking ?

How they can call this "A monumental discovery of huge importance" is beyond me , youtube at its best !

I think This is the original image 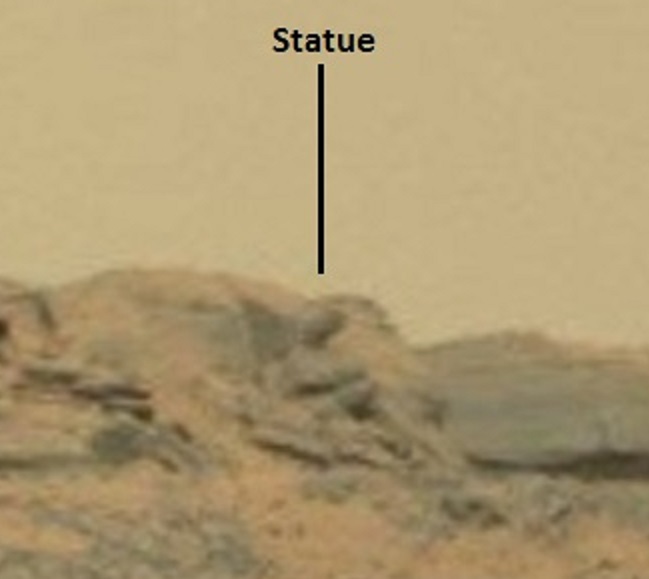 posted on Oct, 13 2014 @ 09:56 AM
link
Some of these youtube Martian sites should really be on ATS's hoax list. This is just a heavily pixelated group of rocks, and the hoaxster who posted it on youtube surely had to know that. Mars is just a box of choc-o-lates.

Let's be kind to one another please. Ridicule and sarcasm are not welcome within this forum.

You can disagree, you can say that's not what it is, and you can make up your own minds. But please be respectful of the OP and any and all members within the confines of ATS.

We're mostly all here for the same reasons. Any further T&C violations will be removed and repeat offenders Post Banned for no less than 72hrs.

they are always rocks, why oh why do people keep doing this? out of the infinite number of planets out their that will contain some form of life we have to continually obsess over mars..

is this because its close and to have it close is much easier..

The object, which appears to be a statue, can clearly be seen at the top of this Martian mound.

I really can't see it clearly, so i will have to say it's not possible to determine if rocks or statue.

Another note to self : I have to cut down on my sarcasme...

posted on Oct, 13 2014 @ 10:13 AM
link
looks like something you would find in an African Desert from an ancient civilization. Maybe the Rover is in Africa Here, I thought it was somewhere in America. They really fooled me.

posted on Oct, 13 2014 @ 10:17 AM
link
a reply to: Lady_Tuatha
I for one, appreciate threads like these, and I appreciate those people who take their time to look for anomalies. They could all be "just rocks", but if no one is looking, it makes it that much easier to slide the real thing past us, because they're all just rocks. Why waste your time? Lets drink our kool-aid and go back to sleep.

You're pretty sure of that...

They say there isn't life on the moon too...

Remember the Bible story about Lots wife who turned and looked at the destruction of Sodom and Gomorrah and was turned into a pillar of salt ? There are hundreds of those pillars all over the dead sea area.. The reason I bring this up if you take natural erosion which on Mars with it's winds and blown sand is a humdinger I would not be surprised if all kinds of shapes of recognizable things can be found..

If this is an artificial statue (Martian made) you gotta feel for them as their world died.. I always hoped John Carter and Deja were really there when I was a kid.. Edgar Rice Burrows and his books kindled my interests in reading (thank you Edgar) I don't know how my life would have turned out otherwise.

posted on Oct, 13 2014 @ 11:00 AM
link
When I see the proposed 'statue,' I do see what appears to be a humanoid form, complete with a head, breasts, and arms. It's eerily reminiscent of a bronze reclining statue from Grecian times. How on earth people spot these is beyond my busy mind. I have a feeling this may just be a case of uncanny valley though. 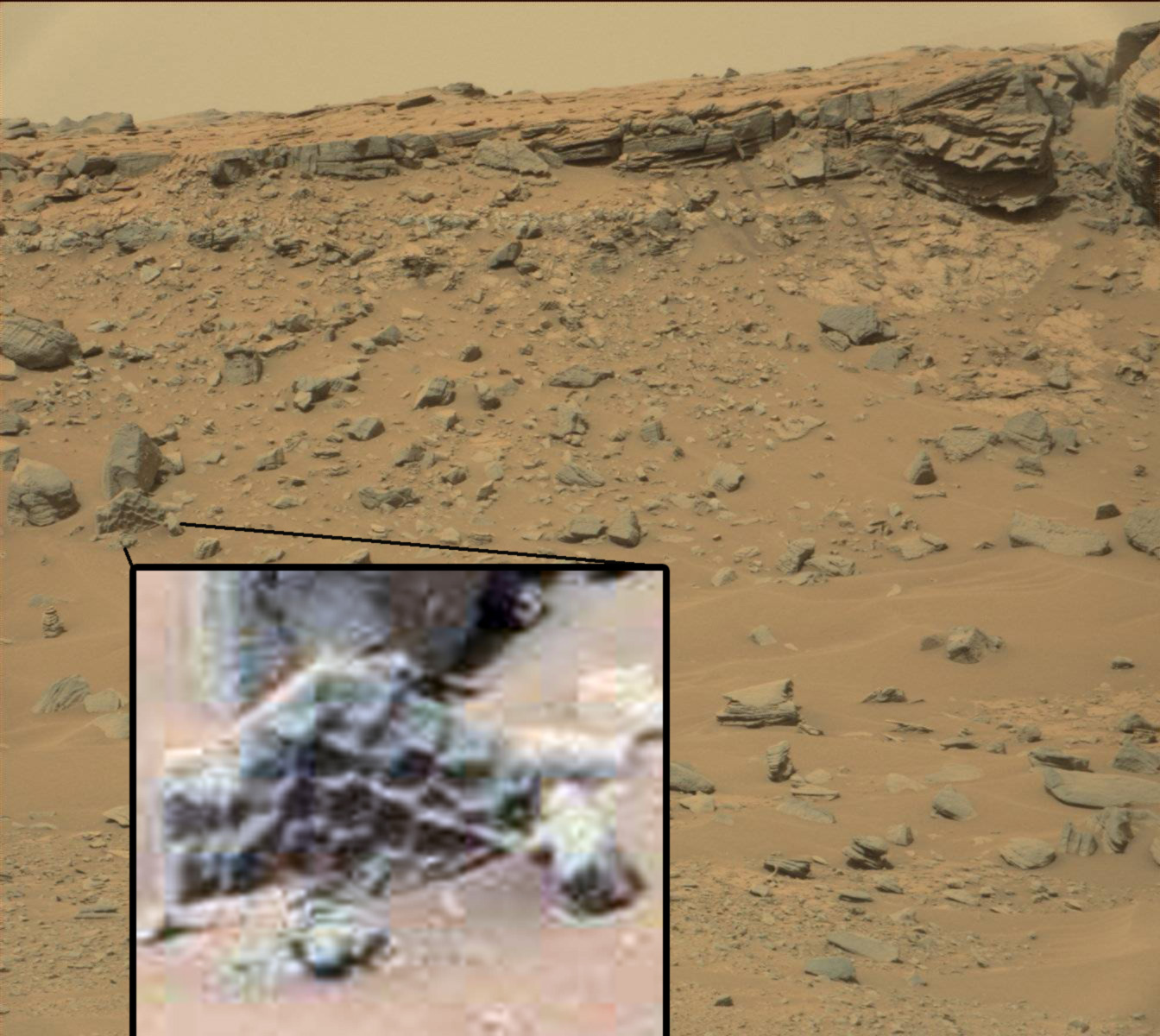 The photos are not quality enough for me to say there is anything there. Shadows make bad images look like great ones sometimes....and so does photoshop.

posted on Oct, 13 2014 @ 12:12 PM
link
I would say why bother with just another picture of rocks that look like something (as if haven't seen enough) and someone on YT claiming it is a statue? Have you not seen the pharaoh temple, rats, squirrels, skeleton of a dino or other animal,etc etc? All being just rocks.

I do not believe these as 99% of the cases are rocks but I've one concern that I didn't take into account before when disbelieving such formations. How can one be sure images of the Moon and of Mars are not doctored?

I learnt of Moon photos being doctored, blurred, I was like wthell, did they really? Why? Why not on Mars as well, either way I think these are really rocks for a simple reason -

many rocks look like objects. some objects would be buried by sandstorms and not just staying on the surface if artificial objects for millions of years.

Phobos needs a detailed examination though, didn't this is the suspicious moon?