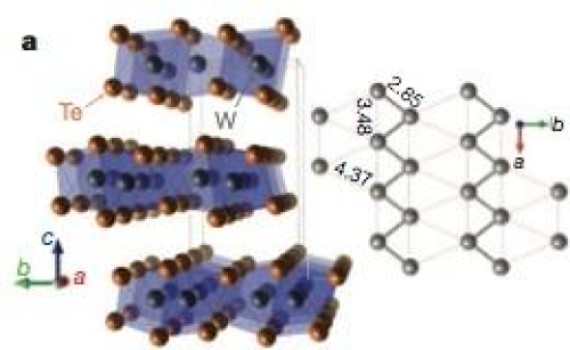 This image shows the crystal structure of WTe2.

Ali applied a magnetic field to a sample of WTe2, one way to kill superconductivity if present, and saw that its resistance doubled. Intrigued, Ali worked with Jun Xiong, a student in the laboratory of Nai Phuan Ong, the Eugene Higgins Professor of Physics at Princeton, to re-measure the material's magnetoresistance, which is the change in resistance as a material is exposed to stronger magnetic fields.

They wanted to name it "ludicrous" magnetoresistance in tribute to Mel Brook's "ludicrous speed" in the movie "Spaceballs" and even gave Mel Brooks acknowledgement in the article but other lab members sucked and vetoed it. They tried again for "Titanic" magnetoresistance but the Nature editors didn't like that and "steered" them towards "large" magnetoreistance.

A great breakthrough and I can't wait to see it applied to technology
edit on 9-10-2014 by knoledgeispower because: (no reason given)

posted on Oct, 9 2014 @ 09:08 PM
link
Great post. Does anyone have any ideas what other applications it might have besides computer applications? It does seem to be a major breakthrough in the properties of materials but I'm at a loss to know where it might be useful. My best,

All I can think of is a sound system, using this magnetism to cancel out extra frequencies. With no saturation point, this would be best in a subwoofer, as bass can get really muddy/ugly really fast.

The original article on physics

Says that it could make for better scanners

I am just guessing but I would think there could be some safety application in housing rail guns, or stealth(hiding electronic signatures).

I just wanted to add this really cool link for all kinds of questions regarding magnetic fields/gravity.