Mount Ontake, a volcano straddling Nagano and Gifu prefectures, erupted on Saturday, spewing ash and small rocks into the air, killing a female hiker, leaving at least 16 people unconscious and 30 others seriously injured, and stranding more than 40 on the mountain, officials and media said.


Now my biggest question here is if this volcano was monitored. And by that I mean did it have modern seismometers, gas emission detection, GPS, INSAR data, and all the other things that you get when you are a threatening volcano. I do not know this, and am trying to find out.

EDIT: SINCE THIS WRITING, I DID FIND OUT- HERE:
www.data.jma.go.jp...

NO QUESTION IT WAS MONITORED

But the volcano is listed on their site. And no alert went out- not until it erupted, that is. And now all of a sudden forecasters are warning against additional eruptions? Well that's nice, now that it has erupted, but where were the warnings BEFORE this thing blew? Be sure to explain this to the family of the dead girl.

I mean the fact that there were hikers on it will tell you that there was no previous alert. But if you must, you can browse through their alert list on the JMA site- and SEE there was no alert before it blew. Now come on Japan. It is 2014. We have the technology to forecast these things- right? All that fancy stuff you people put up there?

Now I am TRYING to make a point here.

Recently, I authored two threads- one about strange events at Mt. Rainier, and the other about a massive swarm of quakes at Long Valley. Fortunately this time the threads proceeded without me hearing too much from the usual haters, about how I fearmonger too much and all that.

But the point is, EVEN WITH MONITORING EQUIPMENT, volcanoes are unpredictable. They can go off without much warning, and suddenly. I tend to believe though that surely there were SOME signs. Inflation, quakes, gas, water temperature- I mean SOMETHING. But some scientist somewhere saw that sign, and probably classified it as "normal background activity." Well a girl is now dead, and there may be more.

So I just want to say, when I post threads about activity at Yellowstone, or Long Valley, or Taupo, or Toba, or Rainier, there is damn good reason. It is called the UNKNOWN FACTOR.

But really, are the factors so unknown? Or do scientists just keep choosing to dismiss them, and play the odds which most of the time work out in their favor? Well they didn't work out for this dead girl, and whoever else was killed or injured because Japan could not warn them in time. Or could they? That is the question. So I am not going to ever feel like I am fearmongering when I post threads about activity at any of these beasts. It could be the last warning you ever get.
edit on Sat Sep 27th 2014 by TrueAmerican because: (no reason given)

I have heard more than once saying, "the volcano erupted without warning", when volcanoes erupt, and that is usually also when people get killed or hurt.

Climbing an active volcano is a high risk doing, even with people in the background monitoring, as you say "you never know when", so the people should know before they decide climbing that there is a huge risk involved, and there might not be any warning before hand.

Warnings btw also have a negative effect called "the boy cry wolf" factor, it starts with fear and ends in denial .

I usually like your threads, but this one smells a little of "look at me" on behalf of a tragic event IMO.

Predictive earthquake and volcano science definitely needs more work, we need to come up with an applicable way of forecasting these events. Countless lives depend on it.

I also want answers for your questions. Who knew what, and when? And if no one knew anything, then there needs to be BIG changes over there.

This sort of thing can't just suddenly "happen" with no one noticing in a well-developed country in the year 2014...

I think you're a little off here.

Yes, climbing a volcano always carries a small risk. But, significant trust is put in authorities to inform you when NOT to climb.

We're given the impression that situations such as this are monitored closely and actively, and that when things look dangerous we will be told.

The fact of the matter is: the authorities dropped the ball on this one, and someone was killed. Not because this person was doing anything foolish or overly risky, but because they trusted those that we were told we can and SHOULD trust.

Here's the nail in the coffin:
www.data.jma.go.jp...

A PDF from JMA's own website, and look what it says at the top!

That document goes on to describe all kinds of activity there, including long period events, the 1979 eruption, and lots more. Read it.

So there is no question that this volcano was monitored, and not only that, had displayed serious warning signs as well.

So what happened, JMA?

You should trust your self before trusting someone else.

An active volcano is not a small risk, you know...it's active.

In reality it should be completely off limit, not that that would keep people away, but at least those people would know they are there at own risk.

Even with monitoring equipment, volcanoes are unpredictable. So remember that the next time some scientist tries to sell you that a massive swarm of earthquakes is due to tectonics, or water and CO2, and not magma. It is always incumbent upon you, folks, to make up your own mind based on the evidence.

There is a terrific article at io9, complete with links to twitter pictures from hikers on the volcano and to the seismograms monitoring Mount Ontake.

This link has a video of the pyroclastic flow. NHK news

A local university professor was speculating that the low temperature of the pyroclastic flow may be because this was a steam-driven eruption. So lucky that it wasn't hotter, or there could be many more fatalities.

This last pic was reportedly taken 30 minutes prior to eruption from the summit. enari's twitter pic 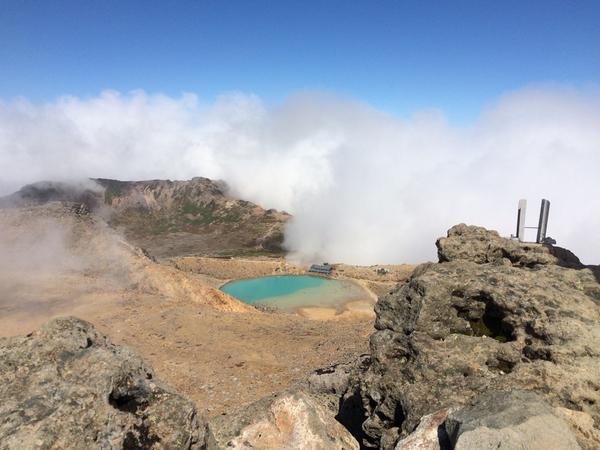 (I truly hope this person did indeed make it out alive--read the io9 account linked earlier in this post.

The volcano was not under any alerts or warnings at the time of the eruption, although it was in a period of heightened seismic activity (animation; seismograms). The volcano failed to exhibit clear signs of an imminent eruption, or if there was a breakdown in the monitoring process. Even if monitoring was ideal, being close to a known active volcano is risky with a whole mess of potential hazards.

No, how about "the volcano was exhibiting plenty of signs of unrest, but we just didn't take them seriously enough."

So as the scientists try to explain away the massive swarm, right under the resurgent lava dome of Long Valley, a supervolcano- beware. Not enough people take it seriously enough. It COULD blow. It just doesn't, luckily- time and time again. Yup, science made easy. Play the odds and win.

Probably not.
Our in house volcanologist claims that the eruption could have been set off by an hydrothermal event. (steam explosion)

In that case an eruption could start with little or no warning.
Even scientists have been caught in similar eruptions before.

Is anyone else surprised that this volcano erupted and everyone was surprised by it? Is it normal for a volcano anywhere on Earth erupts and no one had a clue before hand?

What you post is nobodys business but yours until after
it is posted. If it should be taken down it will be sooner
or later by a Mod.

I suspect jealousy accounts for any complaints
to one of your threads. Not that you're my hero or anything
either. But I can't recall single post from you deserving
of such a demographic.

Wouldn't global monitoring station pick pick up the early stages of a eruption?

If the onset of the eruption was caused by water entering hot magma they would have something like 10-30 seconds warning before it went boom.

People shold IMO be kept on a safe distance from an active volcano in that stage.

The Japanese have the best tech and science for prediction and forecasting when it comes to volcanoes, earthquakes and tsunamis.

It just sounds dumb to throw them under the bus, for no reason, when they have a model for the rest of the world to follow, for areas that have to face these issues.

Seems like hyperbole at the Japanese's expense to justify your EQ thread posting habits? lol.

Then after saying how they failed, going on to say that yes, volcanoes are unpredictable, but there should have been "some sign".
edit on 9/27/2014 by Turq1 because: (no reason given)

No- obviously you're not reading- or just refuse to. I've provided everything you need in this thread to not come to that conclusion. Kind of reminds me of scientists that refuse to pass on the warnings and raise alert levels when the clear signs are right in their face. 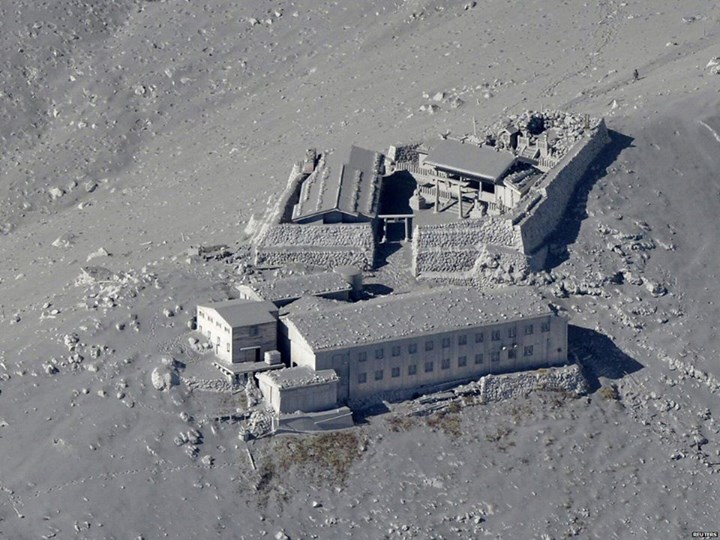 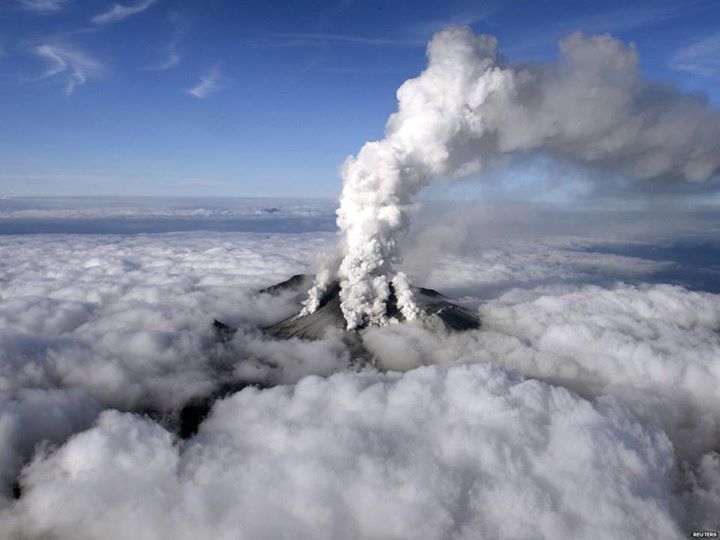 I hope everyone in that area is staying safe.

Take a look a my thread from three years ago:

A Discussion on the Methodology of Earthquake Prediction

Similar studies employing InSAR to map deformation on volcanic terrain can reveal subsurface transport of magma, an important factor affecting eruption probabilities. Detailed maps of the shape of the magma trail give clues as to where pressure may accumulate and also may help constrain the explosiveness of the potential eruption

As you can see from the images, there is an incredible amount of detail available with this method of scanning an area.

Volcano and earthquake predictive science is more advanced than they let on about...
edit on 27-9-2014 by jadedANDcynical because: (no reason given)