posted on Sep, 23 2014 @ 12:33 PM
link
A bright green aurora reflects off a glacial lake against the backdrop of a snow-covered mountain range in an incredible photo that took home first prize in an astrophotography competition. 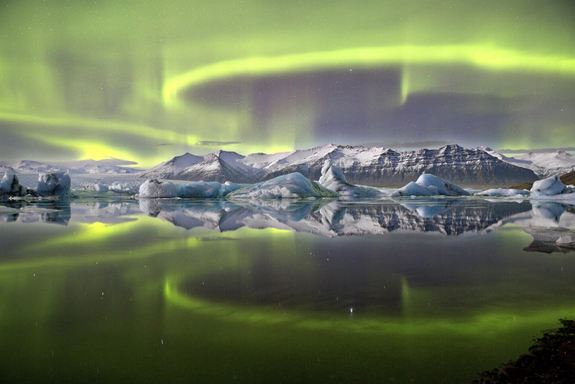 Representatives of the Royal Observatory in Greenwich, England, have awarded James Woodend — the photographer behind the stunning aurora image — the overall prize in the observatory's Astronomy Photographer of the Year contest for 2014. The winners of the contest (which is in its sixth year) were announced today (Sept. 18).
"Although this is not a strong aurora, they sometimes make the best reflection shots," Woodend said of his image in a statement. "The water was very still — you can see the icebergs floating in the lagoon and their reflections. In the background is the Vatnajökull Glacier."
The British photographer captured his winning photo in Iceland's Vatnajökull National Park, with the glacial Jökulsarlon lagoon in the foreground.


Here's a link to the full article Yahoo news

I'm nabbing that for an avatar background, best compliment I can think of

posted on Sep, 23 2014 @ 12:44 PM
link
Wouldn't the prize go to the earth and the sun for this aurora? The guy should just get credit for being in the right place at the right time with a camera.

Beautiful picture.
edit on 23-9-2014 by rickymouse because: (no reason given)

posted on Sep, 23 2014 @ 01:13 PM
link
It's really cool that you seem more stars in the reflection that in the actual sky. Very beautiful image.