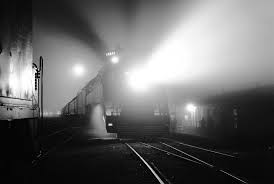 The young woman looked up as the door to the train compartment slid open.

“Yes, you may come in” she replied “I am all alone here.” She let out a nervous laugh.

He settled himself across from her, enchanted as the shadows from the passing countryside played across her face. Her red lips smiled briefly at him, before she turned to gaze out at the black scenes unfolding outside.

“You speak English very well” he commented. “Are you er, travelling there now?”

“No. No I am going to stay with my brother” she lied. “He has a farm in France, with pear trees, fresh milk, clear skies...” A sharp cough cut her off.

His eyebrow raised and he sat back in his chair.

“You need not worry” she laughed weakly. “I was checked before I was allowed to buy this ticket –just like you. The smoke in the corridor goes for my throat...when you opened the door just now.”

“Oh yes of course, yes it is smoky out there...” he muttered, embarrassed by his obvious reaction, embarrassed that she had noticed his fear.

“And you? You are going to England?” she asked.

“No, I’m going to stay with my sister in Paris. She lives on the outskirts – there have been no cases of this outbreak there. We’ll travel out to her father in law’s villa once I get there, and wait ‘til the whole thing blows over.”

“You are very lucky” she replied. Again a little cough.

From further down the corridor they could hear coughing. Voices were raised, doors were being opened and closed.
Neither said a word.
She reached down and began to search through her bag. She brought out two glass bottles.

“Yes, thank you I would love one! I didn’t have time to buy anything, the controls at the station took so long. Do you know, they even phoned my sister to check that I was coming. I suppose they can’t be too careful. Need to keep track of everyone, I suppose.”

The train lurched and they both put their bottles on the table. The train lurched again and her handbag fell open.
He could see a blood stained handkerchief where it had fallen on the floor. Or was it lipstick?
Lights flooded the carriage from outside. For a second, the hazy glow of the compartment was gone, the sharp lines of her cheekbones caught in candid light, the hollows beneath her collar bone laid bare.
Doors opened further down the train and they could hear shouting and the harsh bark of a man. Cases were dragged from their rack, and a door closed. As the lights dimmed once more the shadows outside began to form into shapes. He could see the military vehicles and the men, the trucks and the guns. Amidst it all was an old woman cowering between the arms of two tall soldiers. They were walking her towards a van.

“Where are they taking her?” he asked.
“To test her” she replied, coldly.
“To a hospital?” he asked.
She raised her eyebrows and smiled cruelly.
“Yes, they say it is a hospital.”
“And is it?” he demanded. He had heard the same stories as everyone else, of the testing centres and the thick columns of smoke that snaked from their chimneys day and night. He had not- would not- believe the ridiculous rumours that had begun.

She shrugged her thin shoulders.
He reached for his beer and hesitated. Which one was his? She saw his indecision, picked one and drank greedily. Her eyes challenged him to join her.
He took the remaining bottle, paralysed by convention, bound by good manners to drink.

“To your health” she said, taking another draught.

He smiled wanly and raised his bottle. He pretended to drink, determined to keep the liquid from his lips. She moved from across the carriage and sat by him.

“So drink” she said. “We have nothing to lose. Why not live for the moment? There may not be a tomorrow.”

Her beautiful face was close enough to kiss and yet every fibre of his being wanted to strike out at this toxic creature and her cough, and her blood stained filth.

He stood up and pushed past her.

“Excuse me, I have to go to the bathroom”.

She followed him to the corridor, pressed him against the door.

“Why are you running from me? You think I am infected? How dare you? You would not drink from my bottle and now you will not sit with me?
And what will you do now? Tell the guards to stop the train? Have me removed? Have me tested? You...” She raised her hand to strike him.

Instinctively he put up his hand to block the strike and in his revulsion he shoved her as hard as he could. The train door fell open, the rush of dark wind made him gasp and stung his eyes.
Horrified, he stared at the black mouth of the door frame. What had he done? For a glimpse of lipstick on a handkerchief? The train rattled along the tracks with its mournful, rhythmic song.

He heard the sounds of laughter, and saw two young boys walking towards him, sharing a joke. He reached for the door and slammed it shut.

“Just getting some air” he mumbled as they drew near.

They looked at him and replied in a language he did not understand. Then the smaller of the two shrugged and said something to his brother. The brother laughed and they passed him, no longer interested in the strange foreigner.

He let out a sigh and sank to his knees.

Thank you very much! Nothing like a global pandemic to evoke some pervy noire, lol.
I'm going to read everyone else's this afternoon, can't wait.

Big Fat Star for ya Beans!
I LOVED IT! LOL

Hey Gordi, thank you for reading!
Glad you enjoyed it!

posted on Sep, 6 2014 @ 08:02 PM
link
Excellent story Banshee........ I really enjoyed it. It was visceral, and really hit to the harsh realities of real people in a pathogenic situation. Everything changes, doesn't it? The interplay between the two main characters was gut-wrenching and I really like your turns of phrase.

the sharp lines of her cheekbones caught in candid light, the hollows beneath her collar bone laid bare.

The people were not being 'tested', they were being eliminated. My favorite story so far.

Thank you argentus, that's very kind!
My favourite author is Graham Greene, and I love his writing where just one moment matters-Brighton Rock springs to mind, or the one with the whiskey priest whose title escape me at the moment.
Thanks for reading, and I'm glad you enjoyed it.

I'm trying to get around and read other's stories now, finally, and Wow! I loved your scene set in times of pandemic. Very realistic, very visceral writing. Bravo!!

Here, I'll give you some of these, too!

Oh, thank you for dropping by and many thanks for the medals!
I'm glad you enjoyed it. I'm really enjoying this contest, there are some great stories and some very talented writers here.