posted on Sep, 4 2014 @ 02:00 AM
link
I ran across this website and the beauty within stopped me in my tracks. I had to share it with you guys simply because of the juxtaposition found within.

Here we have an artist that has taken some pretty deadly viruses known to man and cloned what they look like under a microscope... in his favorite medium.... glass. He has also thrown in other microorganisms as well for your enjoyment.

The result is amazing in my opinion and I am amazed that the deadly viruses can be translated into something so beautiful. I hope that you guys can appreciate it as well.

Since Ebola is the soup de jour.... that is where I will start.

One of the most complex glass artworks Jerram’s team have created to date, the sculpture was commissioned for Artis Royal Zoo, Amsterdam, Holland.

Next up is Smallpox -

Of all human infectious diseases, smallpox is believed to have resulted in more human deaths throughout history than from any other single pathogen. The causative agent of smallpox, Variola virus, was eradicated from natural existence in 1977, through a global vaccination effort administered by the World Health Organization (WHO). Currently, the only official stores of Variola are in freezers of two research sites: one at the Centers for Disease Control (CDC) in Atlanta, and one at the VECTOR research facility in Russia. Should these samples be kept for future scientific research? Or should they be destroyed as the samples are too dangerous to keep? Jerram’s sculpture was used on the front cover of a book debating these issues.

HIV Virus - We all know the devastation that HIV leaves in it's wake so there's no description to put here, but there is a letter to the artist about his view of this piece.

Dear Luke, I just saw a photo of your glass sculpture of HIV. I can’t stop looking at it. Knowing that millions of those guys are in me, and will be a part of me for the rest of my life. Your sculpture, even as a photo, has made HIV much more real for me than any photo or illustration I’ve ever seen. It’s a very odd feeling seeing my enemy, and the eventual likely cause of my death, and finding it so beautiful. Thank you.

This artwork has been created to be exhibited at the 2011 Venice Biennale in Glasstress 2011. It’s the most detailed and intricate glasswork Jerram and his team have made to date.

The virus infects E. coli bacteria and has been used for over 60 years in the former Soviet Union and Eastern Europe as an alternative to antibiotics. More recently, the virus has been seen to have potential as a therapy against multi drug resistant strains of many bacteria. One potential treatment currently under development is a phage designed to destroy MRSA. 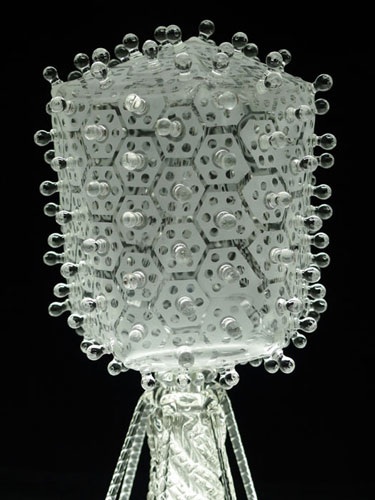 Enterovirus 71 (EV71), one of the major causative agents for hand, foot and mouth disease (HFMD).

This virus is a member of the enterovirus species A. This virus appears to have evolved only recently with the first known strain isolated in 1965. It was associated with an outbreak of neurological disease in the United States in 1969.

Here we have Giardia -

Giardia is a parasite that can infect the intestines and cause ‘giardiasis’ which can lead to sudden-onset (acute) or persistent (chronic) diarrhoea. Infection often occurs after drinking contaminated water containing the parasite, or eating food prepared or washed using contaminated water. Those most at risk of giardial infection include travellers to areas where giardia is common (countries with poor sanitation).

Salmonella, the name of a group of bacteria, is one of the most common causes of food poisoning. Salmonellosis is an infection with the bacteria. Most people infected with Salmonella develop diarrhoea, fever, and abdominal cramps 12 to 72 hours after infection.

Escherichia coli, commonly abbreviated to E. coli, is a Gram-negative rod-shaped bacterium that is commonly found in the lower intestine of warm-blooded organisms. Most E. coli strains are harmless, but some, such as serotype O157:H7, can cause serious food poisoning in humans, and are occasionally responsible for product recalls. The harmless strains are part of the normal flora of the gut, and can benefit their hosts by producing vitamin K2 & by preventing the establishment of pathogenic bacteria within the intestine.

MRSA is any strain of Staphylococcus aureus that has developed, through the process of natural selection, resistance to beta-lactam antibiotics.

Adenoviruses are a group of viruses that cause respiratory (breathing) illnesses, such as a common cold, conjunctivitis, croup & bronchitis.

They are common and highly contagious. Most adenovirus infections are mild.

These sculptures represent the Malaria parasite (Plasmodium falciparum Merozoite). The smooth model shows the parasite just after it has entered a red blood cell. The spiky malaria shows the Plasmodium before.

Last but not least... and not a virus either is Spermatozoa - I know that we could have all figured out what we were looking at, but I had to follow protocol anyway.

A spermatozoon is a mobile sperm cell, or moving form of the haploid cell that is the male gamete. The term spermatozoon comes from the Greek word σπέρμα (seed) and ζῷον (living being).

It's certainly a different perspective when you look at something like this. Many are deadly but here they are beautiful.

posted on Sep, 4 2014 @ 06:45 AM
link
Being past the point of editing, I realized I left out the bit about the artist of the above works. I must correct it so credit is given where credit is due.

Viruses are usually depicted as ugly, scary, almost weapon-like blobs just waiting to meddle inside of your body, but Luke Jerram sees them as something different. There isn't really a color to viruses after all — they're smaller than the wavelength of visible light — and as mere smears when viewed under a microscope, there's plenty of room left open when deciding how to illustrate them.

Since 2004, Jerram has been turning viruses and other pathogens into stunning glass sculptures that are just as eerie as they are beautiful as part of an ongoing series titled "Glass Microbiology." He chooses some of the most feared and deadly subjects out there too, making chilling portraits of everything from HIV to malaria.

Though his sculptures can appear exaggerated, with weapon-like barbs and eerie bulges, they're actually all made entirely to scale. Of course, they're vastly larger than their original forms: his virus sculptures are around 1 million times their actual size.

There are more pics here as well:
www.theverge.com...

My apologies I didn't include it first. It was way too early or too late... It's multiple choice I guess.

Jarrem and his artists have some amazing talent IMO. And I still can't believe he was able to make duplicates of these things so beautifully.
edit on 9/4/2014 by Kangaruex4Ewe because: (no reason given)

posted on Oct, 1 2014 @ 06:18 PM
link
These are beautiful, as is the rest of creation. These were originally created for good purposes. It is unfortunate that they have become corrupt and now deadly instead of benefitial.

posted on Oct, 1 2014 @ 06:42 PM
link
Exquisite, if only they were as fragile as glass in real life. The wide variety is amazing. The round ones with the projections are designed to fit into holes already in the outside of cells, once attached they inject genetic material and turn the cell into a viral factory, interesting how they try to mimic things already in our bodies to gain access into the cell.