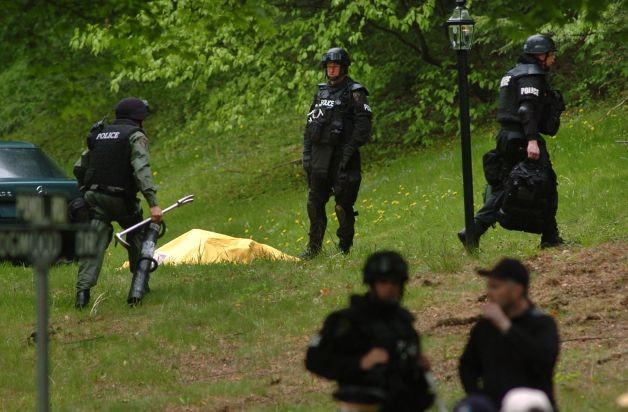 A U.S. federal appeals court has ruled that Connecticut police cannot claim immunity to quash lawsuits seeking millions of dollars in damages from a botched 2008 raid by a SWAT team that severely injured a homeowner and killed his friend.

The decision by the U.S. 2nd Court of Appeals in New York clears the way for a judge to decide whether five suburban Connecticut police departments violated the constitutional rights of homeowner Ronald Terebesi by using excessive force.

On May 18, 2008, a heavily armed SWAT - or special weapons and tactics - team unit knocked down Terebesi's door, threw stun flash grenades into his Easton home and fatally shot 33-year-old Gonzalo Guizan of Norfolk as the two men watched television.

Guizan, who was visiting the home, died after being shot a half dozen times.

“The court ruling here is going to be relied upon in other courts throughout the country," Gary Mastronardi, a Bridgeport attorney who represents Terebesi, said on Tuesday. "They set up the parameters that define the extent to which qualified immunity can be asserted by police in SWAT cases."


Finally, some sense from the courts.

In a 51-page ruling that upholds a lower court decision, the appeals court said the police responded with unnecessary and inappropriate force and under the circumstances, are not protected by "qualified immunity" from the lawsuits.

Awesome. Hopefully this sets a precedence that helps to tone down the systemic overreaction of police lately.

I generally have no problem giving police the benefit of the doubt on their decisions until a full investigation is done and all the facts are available.

But stuff has been spiraling out of control for some time now. They absolutely need to be held accountable for their actions.

"The decision to call out SWERT to execute the warrant was unjustified, unreasonable, an arbitrary abuse of police power and not based on a legitimate law enforcement objective," the suit states. "It was intended to frighten, intimidate, harass and/or punish Terebisi and Guizan and, on information and belief, to further Solomon's interests."

Well, I don't like this guy so let's break into his house, break his stuff, steal his stuff, pistol whip him, and kill his friend all on the word of "woman [who] was extremely thin, her teeth heavily decayed and her eyes glassy and dilated, according to the police report...[whose] body twitched as she spoke," who "couldn't recall the exact address she had been to, she said it was "Wood" something."


--Officer Bart... Ok, not really, but it may as well have been what went through our lovely public servant Officer Barton's head.


That's right. They instigated a SWAT raid that resulted in a completely innocent person's death without even knowing the actual address of the house in the tip they received. Because Barton didn't like the homeowner*.

I have to assume the authorities will appeal. But at least some courts still use the Constitution, but the Supreme Court with this case worries me. If the Supreme Court refuses to hear the case then the lower court ruling would stand.