posted on Aug, 23 2014 @ 12:35 PM
link
This is my one TV vice. I absolutely love this series.
The new season starts tonight with Peter Capaldi as The Doctor.
So all you ATS Whovians, get your sonic screwdrivers and popcorn ready!

Since i was a lad i have also shared a love for the Doctor Who episodes. I recommend downloading the ebooks.
edit on 23-8-2014 by andy06shake because: (no reason given)

posted on Aug, 23 2014 @ 01:17 PM
link
Waits for the americans to turn up and complain about the lack of guns as we all know you cant have action without 100 tones of lead flying every episode

originally posted by: Maxatoria
Waits for the americans to turn up and complain about the lack of guns as we all know you cant have action without 100 tones of lead flying every episode


That made me laugh because i'm American

posted on Aug, 23 2014 @ 01:28 PM
link
Darn you Englishers! I was gonna see if i could watch it in the theatres Monday. I'd watch it at home like the rest of you, but my dad had the bright idea to cancel our satellite!

I better not see any spoilers, or else Time Lord Ash is going to get medieval! Maybe early renaissance...

posted on Aug, 23 2014 @ 01:53 PM
link
Oh my daughter is waaaaay excited to see the new doctor in action tonight. Of course no one can compete with her favorite Dr. -- David Tennant. 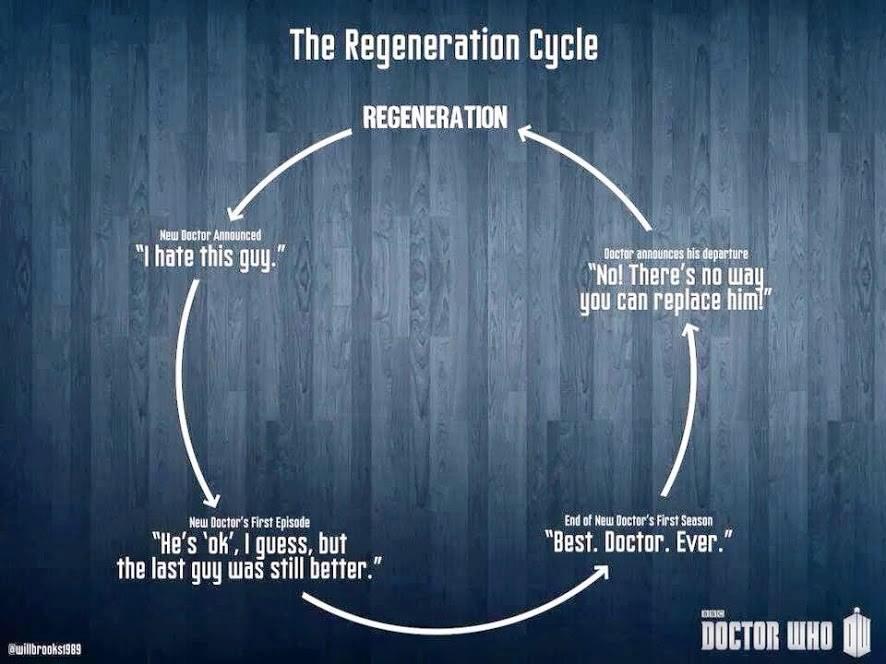 I cant wait to go another spin around the wheel!

I'm an American Doctor Who fan and i have been chomping at the bit all summer for more Doctor. I am really looking forward to getting to know Capaldi. The rumor about the new season being darker has me super excited... I like dark

Who needs guns when you have a sonic screwdriver?

However, I am glad to see they went with an older Doctor. Smith was way too young for me.
edit on 23-8-2014 by ketsuko because: (no reason given)

posted on Aug, 23 2014 @ 08:03 PM
link
Also, it's not that we need the guns in the US; it's just that we've learned the hard way that if we kept the sonic screwdrivers around in our entertainment ... well, we'd be sort of limited as the sonic screwdriver is ultimate deux ex machina device to fix everything.

Therefore, the sonic screwdriver has been more or less banned, except in wacky British imports.
edit on 23-8-2014 by ketsuko because: (no reason given)

EDIT: if any of you who post here ever want to U2U me and BS about Doctor Who, go for it, im game
edit on 8/23/2014 by EyesOpenMouthShut because: (no reason given)

originally posted by: allenidaho
This is not exactly a spoiler, but I will say that I finally figured out where the new Who got his face.


i hoped someone would notice that

posted on Aug, 23 2014 @ 09:57 PM
link
I'm not sure about the new guy, but I didn't get to really pay much attention. I can't watch very closely. Dr. Who is something we have to be careful about. Our kiddo saw the giant Ood brain swallow a man and he has been sort of scared of Dr. Who ever since. Since he was still awake ... I didn't get to watch very much. I was not terribly dissatisfied with what I did see.

Ahh I missed doctor poo, damn I will have to download it, thank's for the head's up.

posted on Aug, 24 2014 @ 03:17 AM
link
I won't say I didn't enjoy the episode, but it was probably the weakest of all Doctor debuts since the show returned in 2005. What didn't help matters any was the "average" story that seemed to take forever to kick-in. Comparing "Deep Breath" (Capaldi) to "Rose" (Eccleston), "The Christmas Invasion" (Tennant) and, especially, "The Eleventh Hour" (Smith), this episode seemed a little lacklustre.

With that being said, I am going to enjoy watching Peter Capaldi as The Doctor as I think the (spirit) of the show needed an older lead character. As great as Matt Smith was in the role (my fave Doctor - and I've been watching the show since the Jon Pertwee years), at times it felt the show was a little too "young", if you catch my drift.

Peter Capaldi is a great actor though, and I'm hoping his "Doctor" will be much darker. Last night's show gave me the impression he will be.

The Matt Smith cameo was unnecessary. Not the big surprise some fans (Whovians!) are claiming it to be since his appearance was leaked earlier this year and confirmed by Smith himself some months ago. It's clear that the show's producer (Steven Moffat) knew Smith was going to be missed and some fans may take time to be won over by Capaldi. Instead, it just came across as Moffat "reminding" fans (especially those who loved Smith) what they're missing.

One thing about Moffat is that he loves his story arcs! The ending of the episode planted the seeds for what'll be the main theme for the series. The "Missy" character is likely the regenerated "Master" (or "Mistress"!) Oh, and we've got the return of River Song coming up too.

To answer a query that another poster posed: yes, Capaldi has appeared in Doctor Who before (playing Caecilius in "The Fires Of Pompeii"), but it has no significance to his role as the Doctor - similar to the actress Freema Agyeman appearing in the show (playing the character Adeola Oshodi in "Army Of Ghosts" during the Tennant years) before she got the role of Martha Jones (Tennant's companion).

All in all, "Deep Breath" (IMO) was something of a slow burner: I found it boring in parts (especially the beginning), a bit "meh" in other parts, and the whole episode was saved by the last 15 minutes. Despite my lukewarm review, I'm really looking forward to the Capaldi years.