Building a song around a solo

I ask because I've currently got three different solos that I've written out but still have not gotten around to writing out rhythm charts for each one.

I mean I know which chords and in which order the solos are built around, but I'm having trouble coming up w/ a rhythm pattern that matches what is being conveyed in the solos.

I was thinking though, what if I just sat down one day with whatever specific solo I was working with at the time and just started strumming the chords until that "magical" moment when it all just seems to click and the song practically writes itself. Would that be something that has maybe worked with any of you guys that play?

The third solo is well, I'm not sure what genre it is exactly lol Third Solo

Any help you guys may be able to give me would be greatly appreciated. Oh, and any other information you guys may need in determining any possible help you may be able to give, please let me know and I'll try and get that information to you asap.
And mods, I'm under the impression that I'm still allowed to link to my band's webpage, unless the permission given from a previous post I had made has been rescinded. If not, my apologies and do what you must.

There is no right or wrong way in art.
Just do it.
Do everything.
There's no wrong way to make it.

I would say if you are going to do it solo first,lead it into the bridge of the song and than lead it out into a more melodic solo,based on the bridge.
Just an idea.

Haven't clicked the links though yet.

I think what sounds best in composing music is to have balance in rythym and melody.
If your rythym is at a stop in your solo, nows the best time to have a change of chords or to be in a counter rythym to the solo.
If your solo is going up, your chords/bass should be going down.

Make your rythym and solo answer to each other like a conversation.

posted on Aug, 21 2014 @ 11:49 AM
link
Solo is always last thing I do and I then improvise a couple of times and normaly keep the 1st take -that's with instrumental music if in playing covers in a band I do the solo note for note but if it's an original I just wing it-As long as you know the key to the song and any key changes it's realy just knowing your scales and arpeggios and playing what you hear in your head

Personally I think its easier to write your rhythms first and solo after. When ever my bands wrote a song the solo was always the last part recorded (music wise) that way you know exactly where all your accents are from every instrument, and I find that the solo has more "feel/emotion" especially with blues.

Everyone has their own way so your not doing anything wrong. I would suggest that next time you should try doing it the other way, you may find that it will save you alot of headaches in the end.

Cheers, i hope to here your finished product soon

posted on Aug, 21 2014 @ 01:50 PM
link
Nothing wrong with working on your solo vocabulary. You may stumble across a melody that can serve as a foundation for a song.
I prefer to start with a riff on the bass or a drum beat. Starting with the solo is kind of like building a house starting with the roof.
Once everything else is clicking the solo is just like walking the dog.

posted on Aug, 21 2014 @ 02:32 PM
link
I will write a verse/bridge/chorus chord structure, usually with a hook, and a vocal melody either comes at the some time or shortly after. For a solo, I will just improvise a bunch of things until I find something that fits, and often is it nothing like I expected.

edit on 21-8-2014 by ScientiaFortisDefendit because: la la la

Every song writer has a different approach to making music,I personally like to start with the piano and figure out some nice chords that will go nicely with my drum tracks.then i usually add a bass line and after that i try to add rhythm either rhythm guitar or a rhythmic synth sequence or sometimes both...then I pad them in necessary parts and add the little ring and bells here and there and only then I am ready to improvise my butt off with my favorite lead synth or guitar...and hopefully if i am lucky and "connected" properly i will end up with something beautiful and with a nice solo part...But there is no one way of doing this as other posters mentioned earlier.Let your imagination go wiled and do not worry about a thing,that way you usually come up with something that is at least more like you.

Thank You for that.
I really like the way you explained your process. I've tried doing rhythm tracks first (with my guitar ) but I usually end up getting lost in the moment and spend hours playing the same chord progression over and over again and never get any further than that lol.

posted on Aug, 21 2014 @ 04:41 PM
link
Thank You everybody for all of your replies and your suggestions thus far, you've given me much to think about.

There is a method of playing solos based on relative minor theory. The same scale (or lead riff)can sound bluesy when played in Am (A minor)...but in a MAJOR related Key? It will sound melodic and "happy" like a Lynard Skynard song.

So? This represents that it may...may... be better to have some idea of what type of progression or type of music (Rock, Fusion, Country etc) you are trying to create.

One can play a Hendrix solo over a Lady Ga GA or even Kenny Rogers tune. So! I'd think some chords (or direction) would be helpful FIRST!

posted on Aug, 22 2014 @ 06:25 AM
link
Yeah you can play all the modes related to the scale,that's a lot of scales,pentatonics and arpeggios that all add colour

For Blues I treat each chord as mixolydian,that way you can realy hear the key change within the notes themself and just sounds way better than staying in certain positions

What would be best to use for Dom7 chords in the keys of A and E in a Blues lead playing situation?

Eta: The progressions I'm using are just your basic 1-4-5 's. Also, I've got 7 solos written out in total ( not including the solos mentioned in the Op) but The first two are in the key of A and then switches to the key of E for four solos and then the last solo switches back to the key of A. In your opinion what would be the best way to string those together? 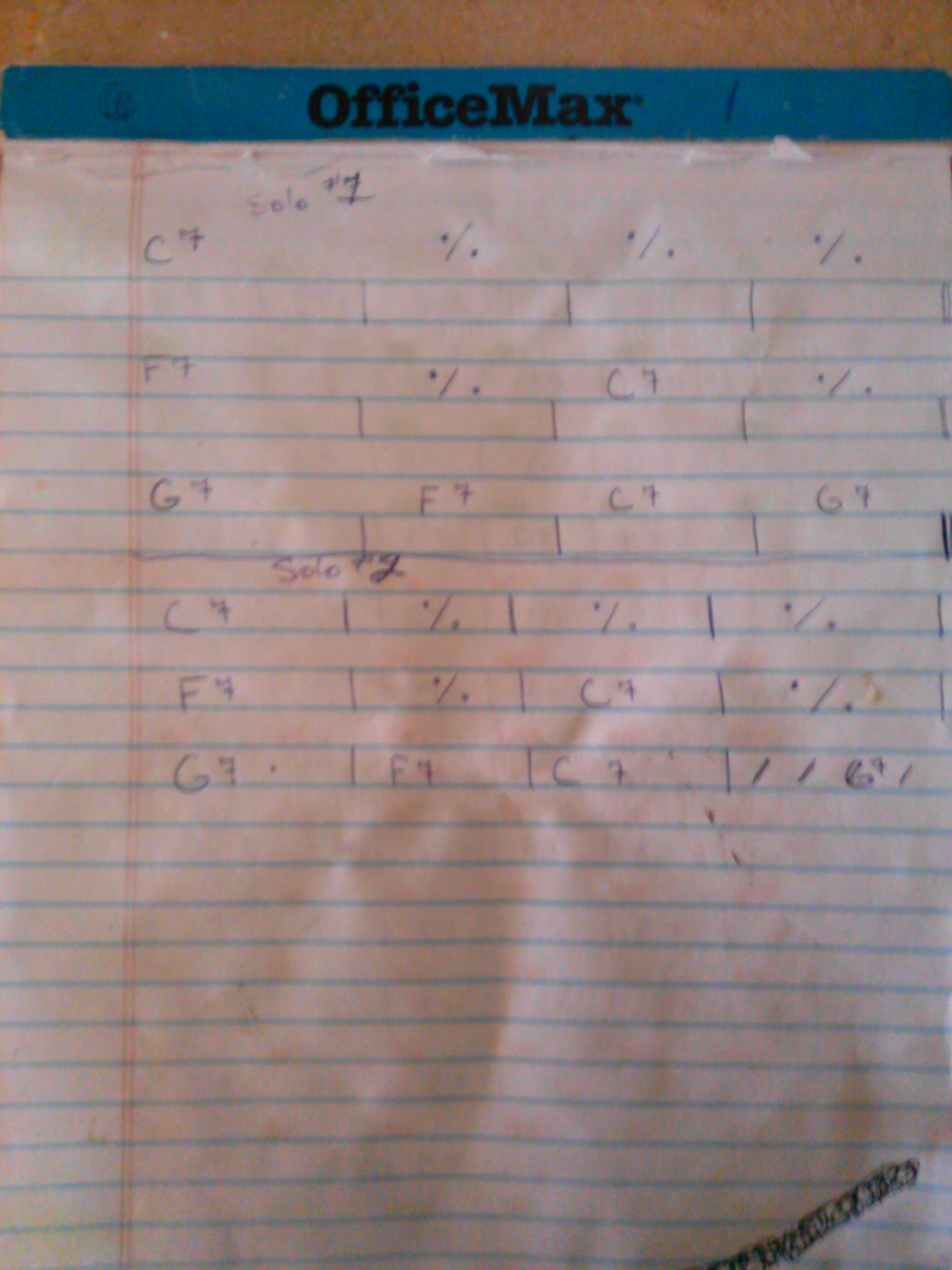 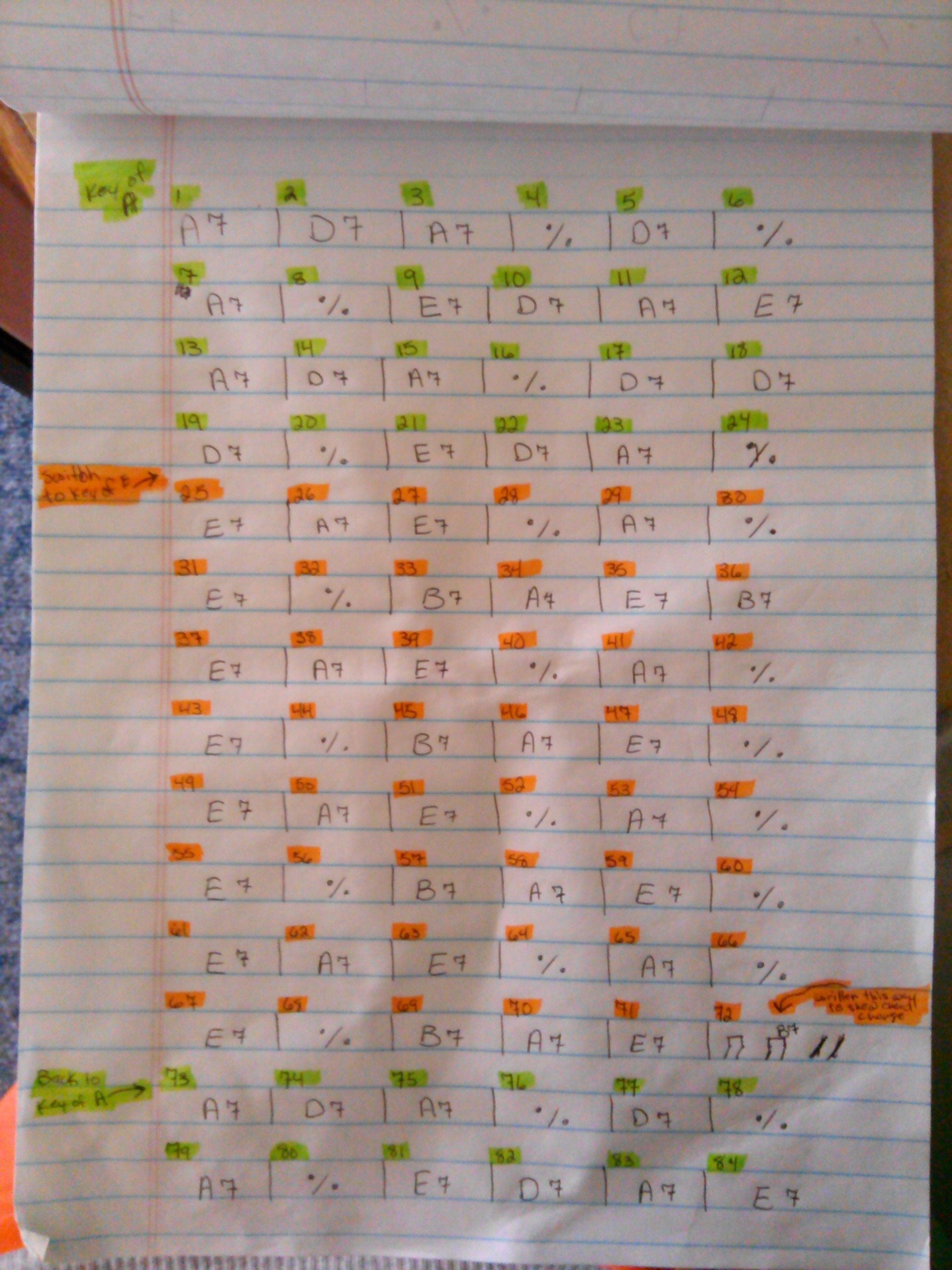 posted on Aug, 22 2014 @ 06:00 PM
link
Will try simplifying ,I teach music and I can see the theory going right over my students heads -when you understand it's a big breakthrough!

Ok treat all unaltered Dom 7 chords as this

Scale = Mixolydian the 5th mode of the major scale

Intervals-3rds 4ths 5ths and 6ths - the 6ths sound realy good,so mess around with them


Important to learn the modes in the major scale

Each note has a chord and a mode

Do the same with each mode,the scale across the fretboard doesn't change any notes it's just the root note changing giving us minor or major chords to use

When playing every single arp in that scale can be played over any mode -so there is always 7 options of arpeggios for each mode or chord your playing over -gives you more colour than standard route arps!


When you eventually get to Mixolydian the 5th note,and learn it-you will know all the positions for Dom chords and the scales that slot over them

Also the modes have colours here they are

Major- major 7 chords has that dreamy major 7 sound that sounds realy good-stay off the 4th it doesn't sound that good! Lol

Lydian- major 7 - major scale with a raised 4th,the 4th is the key to this mode has dreamy sound ala Steve vai


Key to improvising is learning how to change modes quickly

posted on Aug, 22 2014 @ 10:29 PM
link
I don't exactly understand the problem (unfortunately I can't make your links work for me). You have a melody, don't you? A solo is a melody. And a melody automatically gives you a set of chords, based on the root note of the melody. You should be able to hear them in your head automatically. If you can't, you may be trying to run before you can walk; in which case, you need to understand better how chords work to support a melody. You can learn that theoretically, but you will never really get it until you understand it 'by ear'.

A musician who plays by ear should be able to hear a melody and create an accompaniment for it without too much trouble. If the song is fairly simple, you can do it on the fly. The chords needn't be elaborate — simple major, minor and 7th chords are more than enough.

The way you use dominant sevenths is like this. The 'blues scale' is actually a simplified minor scale played over major chords, but with only one difference: the last note in the blues scale is flattened a semitone from the last note in a 'normal' minor scale. A dominant chord is a chord containing that flattened blues note, so you use it in places where you want to emphasize that 'blues sound'.

You can write a blues song that's all dominant chords and it will sound fine, but the places you'll normally find them in a blues progression are in the turnaround at the end of the verse, and sometimes in the second bar. The latter are usually found in slow blues, or blues that have more than sixteen bars, when you sometimes go to the IV chord in the second bar before returning to the I chord. The IV chord you play there is usually a dominant chord — a seventh, a ninth, an eleventh or some such.

Thank You very much for that info. A lot of it I already knew but because I taught myself how to play, I was never able to learn how to use all of it correctly( or even the proper technical names for that matter lol ). And I would also like to say thank you for teaching music to the younger generations and helping to keep music alive. I will try to get some pictures uploaded soon of some of the new lead work I'll be doing as a consequence of all that info you have given me.