GENEVA, July 31 — Fifty-seven more deaths from the Ebola epidemic spreading alarm in west Africa have pushed the overall fatality toll from the outbreak to 729, the World Health Organization said today.

It added that 122 new cases were detected over the four days, taking the total number of confirmed and likely infected cases to 1,323. — AFP


The most recent reported figures were 672 dead with 1201 infected so this represents a fairly significant percentage increase of fatalities and infections. You have to wonder how many are un- or under-reported.

I know that Ebola is traditionally not extremely contagious and requires fairly prolonged contact with a symptomatic and infected patient.

The problem is, that since more infections have taken place, more mutations probably have also. The virus could trade some of its lethality with ease of transmissibility and be extremely dangerous.

I figured this update warranted a thread of it's own.

Source article
edit on 31-7-2014 by jadedANDcynical because: lethality not legality

Contrast that with this article posted at the same time:

London, July 31 (IANS): The deadly Ebola virus does not pose a global threat, a latest report has claimed, adding that as long as the virus continues to infect people in Liberia, Guinea and Sierra Leone, there is small risk of more long-distance export of the disease.

"There is no reason to assume that an exported case - be it to Lagos in Nigeria, a city of 17 million people, or any other place - will spark new outbreaks, because Ebola is not highly contagious," said the Nature report by author Declan Butler.

Granted healthcare infrastructure and education is better in much of the rest of the world, but people should be wary if this shows up outside of western Africa.

With up to three weeks of incubation time, there's quite a few places in which an infected person could be due to this:

Still, witnesses say Sawyer, a 40-year-old Liberian Finance Ministry employee en route to a conference in Nigeria, was vomiting and had diarrhea aboard at least one of his flights with some 50 other passengers aboard. Ebola can be contracted from traces of feces or vomit, experts say.

Sawyer was immediately quarantined upon arrival in Lagos–a city of 21 million people–and Nigerian authorities say his fellow travelers were advised of Ebola’s symptoms and then were allowed to leave. The incubation period can be as long as 21 days, meaning anyone infected may not fall ill for several weeks.

Ebola Victim Who Sparked Fears of a Worldwide Outbreak Was American
edit on 31-7-2014 by jadedANDcynical because: Contrast

This does begin to appear to be a significant disaster. I understand why they keep saying it shouldn't be of global concern, but........that 21 day incubation period makes this much more problematic in my opinion.

As per usual, when a subject captures my interest, I have been scouring the web for articles as well as scientific research and havd thus found this:

According to the current state of the epidemiologic investigation, the suspected first case of the outbreak was a 2-year-old child who died in Meliandou in Guéckédou prefecture on December 6, 2013 (Figure 2). Patient S14, a health care worker from Guéckédou with suspected disease, seems to have triggered the spread of the virus to Macenta, Nzérékoré, and Kissidougou in February 2014.

Compare that to where it is now and you can see that it is not burning itself out but rather seems to be picking up steam. I hope it does repeat prior patters, but to date no other outbreak has travelled as far and records keep being broken.

originally posted by: jaytay
The Powers that be want to Depopulate and I guess this is it.

During a good sneeze, up to 40,000 droplets of saliva may be expelled from the throat and some of them fly out of the mouth at speeds of up to over 60,000 kilometers per hour.

You're correct that it's a drop in the bucket...so far

Ever seen an exponential curve? 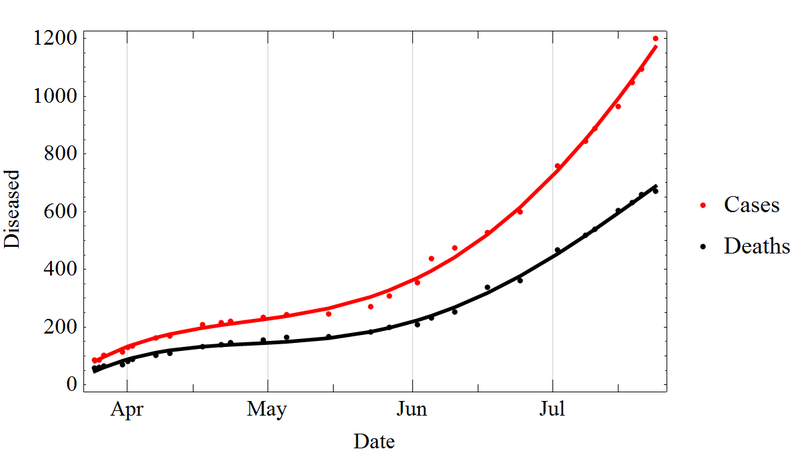 Hopefully the slope levels out and begins a downward turn, but that does not appear to be the case.

Thanks. I only just heard about the "burn out" phenomenon. I also just heard that while this outbreak has broken the burn out records, its also dropped in lethality, down from 90% to 60% due to the development of new techniques in treatments and earlier intervention.

Who knows.........maybe this virus will morph into something with declining lethality!

and counting,, gonna be the new,, in vouge countdown period.

and maybe we both,can finally get that lottary win,,, probably not.

"Nature abhours a vacumn,,,,
even between the ears,,"


originally posted by: jaytay
The Powers that be want to Depopulate and I guess this is it.

Just like trains, they start out slow but it will pick up speed. The math isn't constant like you make it seem. You better hope it doesn't get faster because I sense denial in you. You can die at anytime just like anyone else, so what these victims go through dying from Ebola, just imagine what they go through.

Don't worry. There's nothing to fear. Death is a gift, but the question is are you willing to accept the gift.

That's where Christ comes in. All you have to do is believe in him. We have free will and we are able to change the outcome of the events but it's up to us. Are we willing to take up on our cross too as Jesus Christ did for all of us? I died for us because he loves. Don't forget that.

This a message for everyone. The opportunity is there, don't miss it.

You're right - it's a bloody huge jump, and most likely there are a whole lot more people exposed/infected who are hiding from the tracers and 'census-takers.' ...Found your figures on the WHO site yesterday, had an argument with a friend about it who was holding to Monday's figures being reported by the MSM. So good to give the numbers a separate thread, maybe keep it updated for big jumps?


originally posted by: jaytay
The Powers that be want to Depopulate and I guess this is it.

You've got those maths completely wrong.

There are all apparently already entire villages in Africa with "dead people just laying all over the place." Homes with large families all dead inside.

posted on Aug, 1 2014 @ 05:05 PM
link
I think the actual death toll is much higher than that. It would seem 729 is only including the confirmed cases reported in hospitals, reported by staff.

The number will go up. This now has the world's attention.

These updated figures have already been posted in other threads, but I decided to go ahead and add them to this one for completeness: 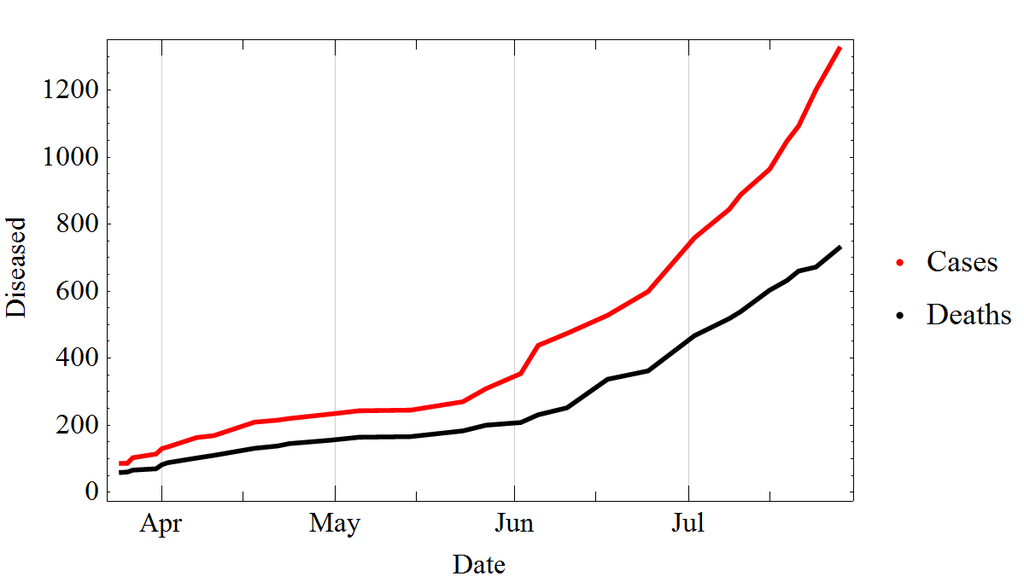