Speculation is swirling on social media after strange, flashing lights were spotted over north Toronto on Saturday night.

North York residents took to Twitter to report the colourful lights moving in the Yonge Street and Sheppard Avenue area. Toronto Police confirmed receiving some calls about the flashing pink, green and white lights spotted in a single diagonal line.

A video of the lights was posted on YouTube Saturday by Sarah Chun, who described what she saw as: "A really bright orbital object...glowing!"

“(It) stayed in one spot for about 10 to 15 minutes but then (it) started moving Southwest towards Yonge and Sheppard... then disappeared out of my sight,” she wrote.

Another person who commented on the video said his mom saw the same thing.

“My mom got two really good pictures of it, was right in the flight path. Planes were going right and left to get around it.

One video showed more than a dozen people on the ground looking up to the sky, recording the event with their smart phones.

Calls to the Greater Toronto Airport Authority were unanswered. Toronto police at 32 Division say they received a few calls about it overnight.
After seeing the story on CP24, a Toronto police officer who patrols 32 Division sent a tweet explaining the incident.

"Hard to believe my UFO from last night actually made it as a top news story with CP24. #Quadcopter Google it!," he wrote before adding the additional hashtags #headshake, #slownewsnight.

"Quadcopter was up over Yonge Street north of Empress last night," he tweeted. "Was launched from a building top."

A quadcopter is a multirotor helicopter that has been used as a surveillance tool as well as a way to test different theories of flight navigation.

posted on Jul, 27 2014 @ 12:03 PM
link
I don't know about you guys but I think that light show was pretty cool...albight those lights in the sky were pretty big who knows if they were actually Chinese lanterns or not.

What do you guys think? Quadcopter coverup or lanterns? Definitely not birds!

posted on Jul, 27 2014 @ 12:18 PM
link
Looks like some lights strung from the top of that building to the ground. If you hold a ruler up to the screen you will see they are in a perfect straight line. That's almost impossible for anything that is not tied together by a line.

As for planes having to go around them..doubtful , very doubtful

Frm a quick view the line of lights in a diagonal line closer to the ground seem to have lights that satrt from the street level or thre abouts it seems.

Its hard to see but when the video goes across to show the diagonal line of lights yu can follow them down and see one or two inbetween the buildings that seem as tjougth it starts from the ground or from a building.

Interesting footage, the diagonal lin is what interest me, the other dot of light just twinkles.

Interesting to say the least. Going to wait and see what developes on this.
S+F for You!
Syx.

If it was a Quadcopter I guess that shows a problem with them that should grow as more people own them, if in fact the airplanes had to go around it as the one person stated. Seems like someone would be in a lot of trouble launching from a roof and letting it sit in a flight path...maybe that would be checkable as the officer seems to know the launch site they must have caught them.

originally posted by: Char-Lee
a reply to: Skywatcher2011

If it was a Quadcopter I guess that shows a problem with them that should grow as more people own them, if in fact the airplanes had to go around it as the one person stated. Seems like someone would be in a lot of trouble launching from a roof and letting it sit in a flight path...maybe that would be checkable as the officer seems to know the launch site they must have caught them.

It doesn't however explain the perfect diagonal line of the lights.

posted on Jul, 27 2014 @ 12:43 PM
link
I've seen some good footage out of Toronto before but this is pretty high profile with the airport involved and the amount of witnesses. Thanks for sharing it. S&F


It doesn't however explain the perfect diagonal line of the lights.

I noticed that the line of colored lights goes down all the way to the street if you look carefully. It looks like and advertising display. If it is not, then surely someone took UP CLOSE pictures of these as they are stationary and right on top of everyone? I was assuming that even though the video focused in on them a couple times, that they were not the videos intended target but the high altitude light.

I was waiting for some unexplainable maneuver because really with so many things even an average person can purchase and put into the sky with lights now, only a super odd movement we are incapable of with these drones could be proof of anything unusual. 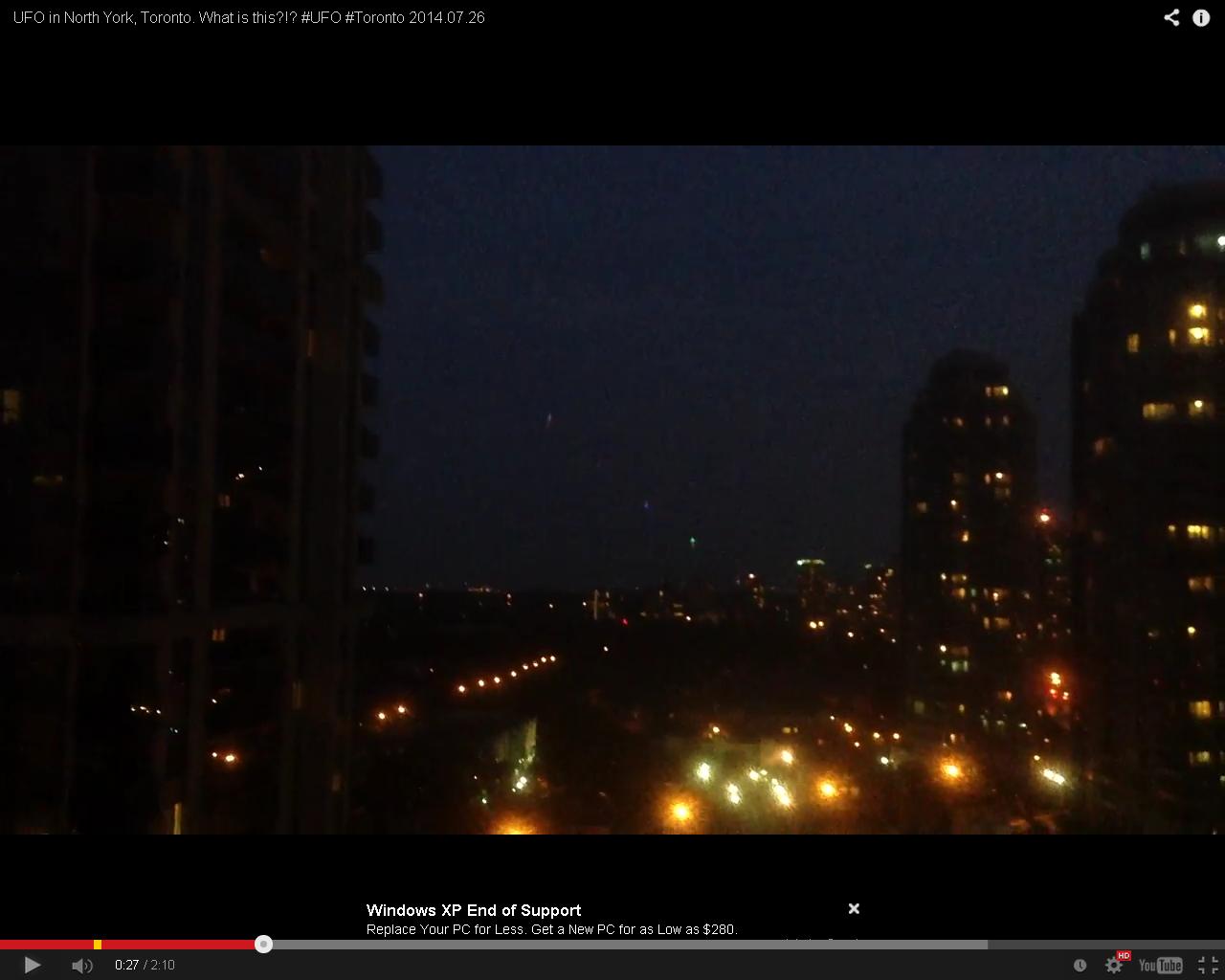 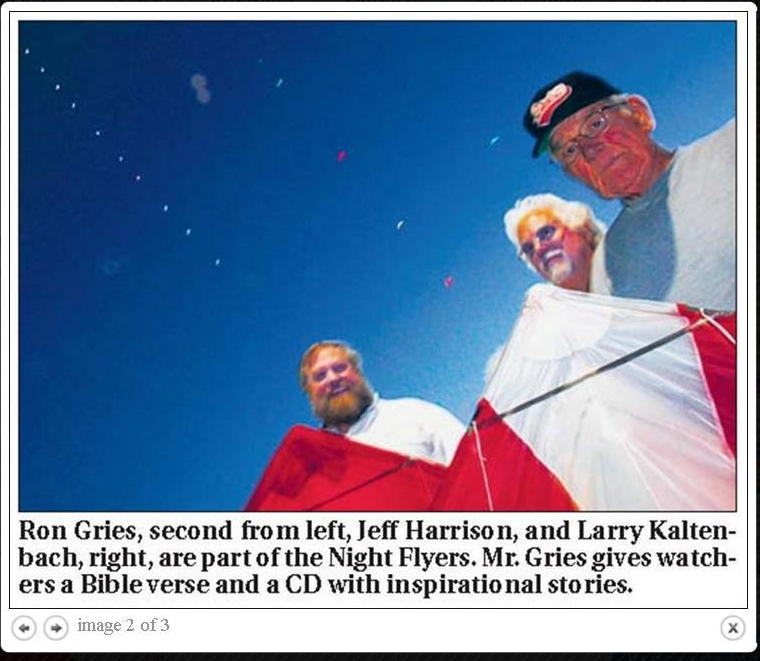 originally posted by: Skywatcher2011
It doesn't however explain the perfect diagonal line of the lights.

If that camera is looking West-Southwest, which I believe it is, then it would explain both sets of lights.

The witness said the object hung around for 10-15 minutes, and then moved Southwest until it went out of her sight, possibly behind (or landing on top of) that apartment building in the foreground. Therefore Quadcopter story holds up.

This would also mean the diagonal string of lights is West-Southwest, which from Yonge and Sheppard points right at Pearson International Airport. Planes landing. You can even see them moving closer to the horizon over the course of the 2 minute video.

Ran across this story I think you will find interesting.

It turns out that a neighbor named Todd had spent $300 on balloons, helium and lights. He had the entire contraption on fishing line. The lights were more than 4,000 feet in the air. 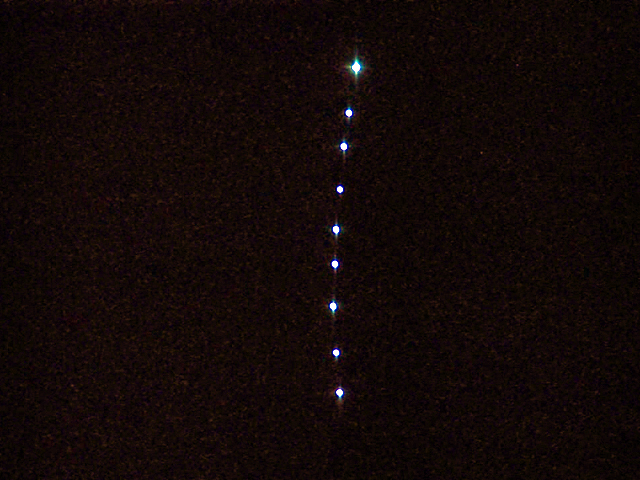 Darn it Todd!!
Those straight line of lights were my stickler to getting to ufo's.
Just to straight

posted on Jul, 28 2014 @ 01:51 PM
link
howdy all... for those who live in and/or around the Greater Toronto Area... you should check out the UFO Contact Retreat coming up late August with Sheehan, Cameron, Bassett, Makreas, Viggiani, etc..

You can order tickets online via the site or thru the Conspiracy Culture Bookstore in Toronto.

I think wifey and I will be going!

posted on Jul, 28 2014 @ 03:57 PM
link
Looks to me like a gaggle of teens using laser pointers onto the low cloud cover. They can be purchased easily from any hobby enthusiasts store.