Reports are that a loud boom or series of booms last night came from Navy training exercises, but numerous people on the Outer Banks also reported seeing bright orbs rising above the ocean at about the same time.

I live in the area but I'm more inland, and did not hear any booms or see any lights. I heard about this from my sister who heard it on the radio on her way into work this morning. The quote above is from the first article (Source 1) and below is from a second article (Source 2) they don't add any new information but seem to quickly dismiss any possibility of it being UFO related.

A loud boom and floating orange orbs were the talk of the beach this morning, but we can confirm with confidence that UFOs are not just over the horizon.

Really? That was a fairly quick rebuttal of UFOs

I'm sorry but just hearing from someone on a pier that it was Chinese lanterns released somewhere "on the beach" (that's a big beach out there...) isn't a big breakthrough of the source of the lights. I could go out to a pier right now and start telling people I saw a whale out there yesterday and that doesn't make it true! For all we know, he heard it from somebody who read Article #1 and assumed they said it was Chinese lanterns.

No, hear-say shouldn't be definitive proof of it being "Chinese lanterns" in my opinion.

Personally, I'm no stranger to hearing strange booms here. I live right in-between the bombing range and the ocean. Sometimes jets break the sound barrier, sometimes they conduct exercises out on the range, sometimes they're off-shore. The strangest booms I can recall happened about two years ago in the middle of the day. I heard a series of booms in a specific pattern. That pattern was the same every time the booms occurred, but they did not occur at regular interavals. For example; BOOM - BOOM BOOM - - BOOM - - BOOM was the pattern, but in-between patterns there may have been 10 seconds, or five minutes. Eventually, after several patterns, I heard no more. I was assuming myself that it was probably a battleship firing it's cannons in a specific order... and canons from a very far distance is exactly what it sounded like. But, there was an article from that time from the same news source, but it doesn't offer any clear explanation either. They refer to the booms as "Seneca Guns".

So there we have strange booms in mid-day with no explanation offered up by the Navy that they were conducting exercises, yet once you bring in the possibility of UFOs with strange lights, they waste no time at all in confessing to making a little noise in the middle of the night.

No, sorry, I'm not completely buying it. Something might have happened out there, something that they need an "official" story to cover for.

posted on Jul, 24 2014 @ 12:44 PM
link
I'm on the east coast of Virginia. We have gotten the booms here too and we're surrounded by military and loads of UFO reports originate in this area and OBX I'll be listening. We have thunderstorms today and a tornado killed two people on the eastern shore this morning. So bad weather can hide booms and orbs and keep the news on the weather instead of mysterious booms. a reply to: Aldakoopa

Hope to hear something more about what actually happened, sounds like there is likely more to the story. Anyone here on ATS close enough that you saw anything?

posted on Jul, 24 2014 @ 01:05 PM
link
If its military excercises, could it possibly be flares? When they practice near our house the flares are orange and they seem to be floating in the air.

posted on Jul, 24 2014 @ 01:07 PM
link
So, the Navy confirms there were naval exercises being performed that night, another source confirms chinese lanterns were released near the pier that night, and suddenly UFOs are the main culpret?

posted on Jul, 24 2014 @ 01:23 PM
link
once again, I recall an episode on "Unexplained Files" a few months ago, which touched on the North Carolina beach area and was focused on some strange booms hear and also orbs seen flying about. Can't rule anything in and can't rule anything out I would say.

originally posted by: JoeSaintsky
If its military excercises, could it possibly be flares? When they practice near our house the flares are orange and they seem to be floating in the air.


That was my first thought but the navy only claims responsibility for the boom, not lights. 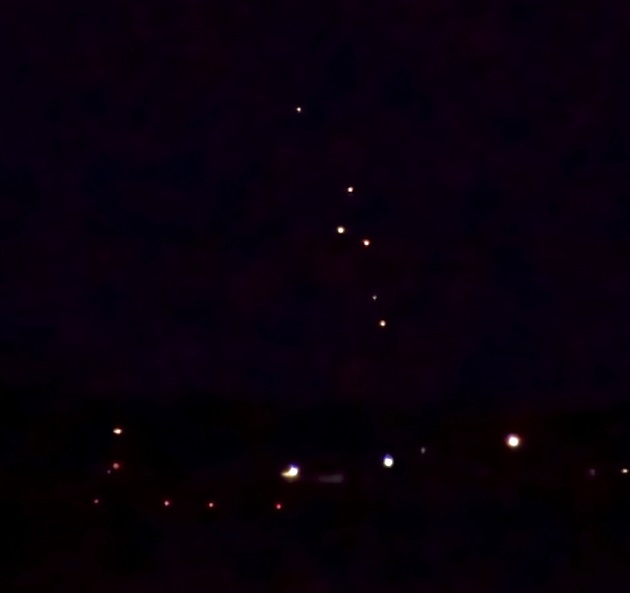 Picture from source 2 Looks like lanterns rising into the night sky to me.

Well, this is the aliens and UFOs forum...

What I found interesting was how quickly they rolled out the it-was-not-UFOs response and the Chinese lantern scenario. That's essentially like immediately saying it was swamp gas or the planet Venus. Maybe it was, but it just has the feeling of disinfo said with tongue firmly in cheek and that no one is really expected to believe.

If anything, that response seems more intended to plant the idea it was UFO's than to dismiss the idea. Which leads down another interesting path. Maybe it was actually Manitou! Apparently there is a long history of the booms there, and that is the Native American belief:

And then there is Roanoke island there, site of the infamous lost Roanoke Colony.

originally posted by: gavron
So, the Navy confirms there were naval exercises being performed that night, another source confirms chinese lanterns were released near the pier that night, and suddenly UFOs are the main culpret?

Let Me recap, navy claims responsibility for boom the day after the event even when they haven't for similar incidents in the past, the first article speculates about sources for the lights while quickly admitting it's not ufo related even though at this point it is, by definition, a ufo. They speculate about it being Chinese lanterns the most. Later in the second article their source is nothing but hear say, which was probably sparked by their first article.

posted on Jul, 24 2014 @ 02:11 PM
link
Every single time someone releases Chinese Lanterns on the beach here in Cali, my friend's gf (She is a police dispatcher/operator) tells me they get flooded with calls about UFO's. In the case of the OP, I think its pretty evident that we have military likely test firing something, coupled with the lanterns being released. There's no mystery here.

posted on Jul, 24 2014 @ 02:13 PM
link
I can't attest to anything else BUT the booms. I live more in southside Virginia and have heard the booms a few times over the last several years. I have posted in several threads here about them. At 37 they are booms I have never heard from anything else. We received no satisfactory answer then either. It's likely the same will occur in this case as well.

I think if they are running drills on or trying out new technology, they could at least say as much without giving away anything top secret.

originally posted by: gavron
So, the Navy confirms there were naval exercises being performed that night, another source confirms chinese lanterns were released near the pier that night, and suddenly UFOs are the main culpret?

They have no idea what Occam's Razor even means.

originally posted by: JadeStar
They have no idea what Occam's Razor even means.


When you have no good evidence either way, it's easier to forget about something and get on with your life if you just imagine it to be the most obvious mundane thing possible. Not that that's what it is. It's still unexplained. But it's easier to ignore.


On the seafloor just off of the U.S. East Coast lies a barely known world, explorations of which bring continual surprises. As recently as the mid-2000s, practically zero methane seeps — spots on the seafloor where gas leaks from the Earth's crust — were thought to exist off the East Coast; while one had been reported more than a decade ago, it was thought to be one of a kind.

But in the past two years, additional studies have revealed a host of new areas of seafloor rich in seeps, said Laura Brothers, a research geologist at the U.S. Geological Survey. And surrounding these seafloor vents, scientists have found a variety of unique life forms, like mussels and crabs, that survive via symbiotic relationships with methane-eating bacteria, Brothers told LiveScience's OurAmazingPlanet. New technologies have allowed scientists to keep locating new seeps, including one that may be the largest in the world. The findings have changed geologists' understanding of the processes taking place beneath the seafloor.

"These newly discovered [seafloor] communities show that there is much more seafloor methane venting then we previously thought, and suggests that there are many more seeps out there that we don't know about," Brothers said.


40 seafloor gas seeps found off the US East Coast


The seeps were found in four clusters, three of them about 100 miles southeast of Nantucket, Mass. The other cluster, consisting of 17 of the seeps, was mapped about 90 miles east of Cape Henry, Va., according to a release from the National Oceanographic and Atmospheric Administration, which led the expedition.

IN mid-2000's, only one known seep hole...by Jan. 2013 there were 40 large seep holes discovered. Imagine how many there are now. Most likely the source of many of these strange happenings from out to sea on the East Coast.

Picture from source 2 Looks like lanterns rising into the night sky to me.

That picture was taken from Roanoke Island,I'm assuming from the downtown Manteo boardwalk judging by the lights, I am familiar with that view. It's about 5 miles away from Nags Head's beaches at the closest point. I am trying to contact anyone who actually witnessed the lights and/or boom to verify eye-witness stories. I'd really like to talk to the two people who took those pictures in the first two sources.

All reports I've read of the lights all say that they were OVER the ocean, not the beach. Now, if they were lanterns, they would be blown out over the ocean, meaning that some tiny little candle-powered lantens were > 5 miles away from that picture and still appear that big and bright?