ISIS to Iraqi Christians in Mosul: Convert or Die

BAGHDAD, July 18 (UPI) -- The Islamic State of Iraq and Syria distributed leaflets to Christian leaders in the northern Iraqi city of Mosul this week, threatening violence if they don't convert.
Christians who do not accept Islam or fail to pay extra taxes to the Islamic Sharia courts, the letters warned, will face "death by the sword."

Christians who do not agree to ISIS demands were also given the option to leave Mosul. According to a message from ISIS leader Abu Bakr al-Baghdadi, non-complying Christians were permitted to "evacuate themselves only from the caliphate state" by 12 p.m. local time on Saturday or their "only option is the sword."


ISIS to Iraqi Christians in Mosul: Convert or Die

Here is your sign that WW III is upon us. 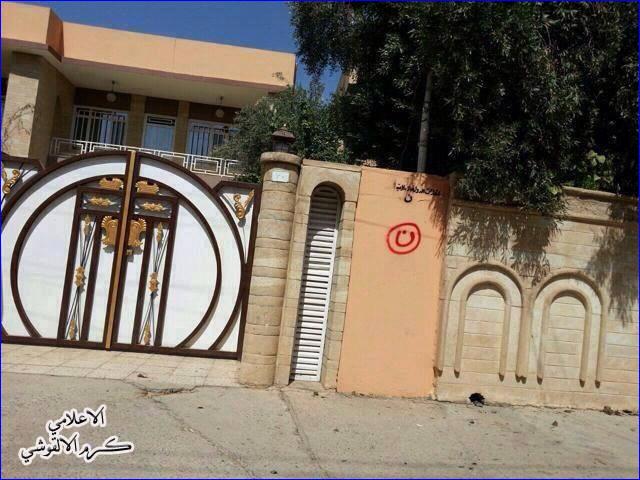 Take a good look at the photo above... notice the red mark---kind of looks like a smiley face painted on the wall?
Guess what it really is

The Arabic letter "n" (inside red circle), signifying "Nasarah" (Christian), on a Christian home in Mosul.

That home was marked by ISIS and the threat is clear, convert , leave or die!

The Islamic State of Iraq and Sham (ISIS) is killing, kidnapping, and threatening religious and ethnic minorities in and around the northern Iraqi city of Mosul. Since capturing Mosul on June 10, 2014, the armed Sunni extremist group has seized at least 200 Turkmen, Shabaks, and Yazidis, killed at least 11 of them, and ordered all Christians to convert to Islam, pay “tribute” money, or leave Mosul by July 19.

Nothing I can think of has the power to trigger WW III than this single act.

ISIS has also targeted Iraqi police and security forces, many of them Shia, ordering them to “repent” at designated mosques in Mosul and the nearby city of Tal Afar for following state law rather than Sharia (Islamic law), or face death. Under that threat, hundreds of security officials and soldiers have “repented,” local residents told Human Rights Watch. But a relative of one Mosul policeman told Human Rights Watch that he fled instead after learning that two of his fellow police officers, both Shia, were found dead in late June in Mosul even though they had “repented” a few days earlier.

Soooo--- while the world attention was turned to plane crashes and Gaza being bombed back into he stone age... ISIS was doing their part to anger the world at large-- and if we do anything about--- we will, without a 'Doubt' turn a civil conflict into a religious war... Pitting one ideology against another... And that is a thing that knows no, nor can be contained by geographical boundaries... This could easily become global in it's scope... the stone in a pond whose ripples flow ever outwards...

Once that first shoot is fired there's no turning back...
edit on 19-7-2014 by HardCorps because: (no reason given)

In my opinion your last paragraph is flawed.

It isn't pitting one ideology against another,it is saying each one is worth as much as the next. THAT IDEAL is worth something I will die for.

I think the Russians are kind of busy playing the CYA game.
There's little doubt who's behind the shooting down of MH17...

an act that unified most of the European union against them.
Now there in damage control mode... ad not going to be quick to take action anywhere until their out of the spotlights again

Glad to see this posted without making a political issue out of it!

This is pretty bad... Would like to say this is a bluff but in reality that is probably not true.
Hope the people that are facing this prosecution can get out of there safe!

Here we go--- and let me say I love a well rounded argument... Co-do's to you my friend.

Now lets get to it.

it is saying each one is worth as much as the next.

But if we do it your way.. Aren't we I effect singling out one ideology we disagree with and mark it for destruction... much in the very same way ISIS is doing???

originally posted by: Hellas
ISIS will be dealt with sooner or later by the Russians

I say, give it to the Chinese ... let the Chinese take over the middle east for a change. Tell them, this is your problem ... you make peace there, anyway you want.

To be fair...
ISIS is killing everyone who's not ISIS....

your right about Muslims killing Christians... it's just never happened on this kind of scale before... Genocide hidden behind a vale of Doctrine.