posted on Jul, 18 2014 @ 03:18 PM
link
Here is a list of armed conflicts in 2014 that I got from Wikipedia with 1000+ casualties per year. I was looking for this earlier today in order to see how many different conflict zones are east vs. west ones or proxy wars. 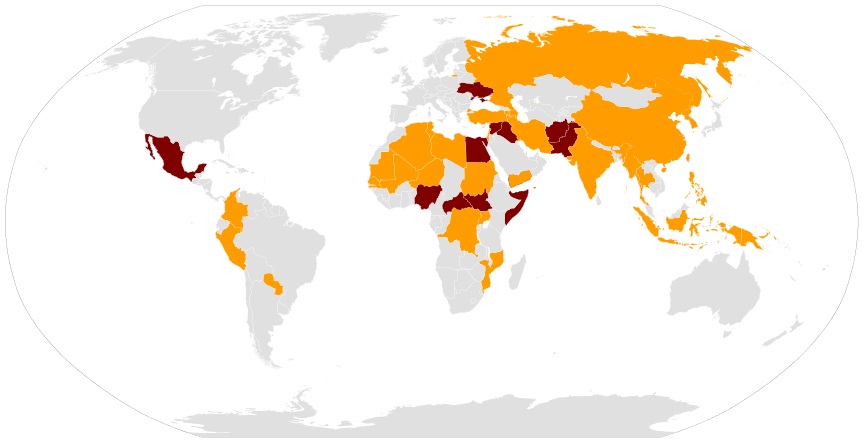 I did some research into those armed conflicts on the Wikipedia links provided.

Afghanistan involves the U.S. fighting the Taliban, who are an Islamic extremist group based there.

The Syrian Civil War involves insurgents fighting the Regime of Assad - and Assad is more supportive of Christianity than the rebel militants, who consist of various different factions, including ones affiliated with the Taliban, that the U.S. allies itself with. Russia is allied with Assad.

The Egyptian Crisis erupted in 2011 with the Arab Spring, which was a movement supported by the Muslim Brotherhood, at least in Egypt. Mohammad Morsi was one of their members who became President in 2012, after the military, supported by the people, briefly held power. In 2013, over 2 million protesters protesting Morsi resulted in his being ousted by the military.

The war in Pakistan erupted in 2004, when the country of Pakistan was put under pressure to oust Taliban fighters hiding in its mountains. This resulted in armed conflict that still goes on to this day.

As for Iraq, violence has risen after the U.S. withdrew its troops and peacekeeping forces in 2011.

Since the U.S. military's withdrawal, the level of violence has risen,[40] as Sunni militant groups have stepped up attacks targeting the country's majority Shia population to undermine confidence in the Shia-led government and its efforts to protect people without American backup.[41] Armed groups inside Iraq have been increasingly galvanized [excited] by the Syrian Civil War, with which it merged in 2012.

The 2014 unrest in Ukraine is the result of pro-Russian militants and others protesting Ukraine's decision to forge closer ties with the E.U., which is just coming out of financial difficulties. Demonstrations erupted in Kiev and other cities, with Rebels gaining control of cities and Russia moving into Crimea at one point. This is the conflict zone where the Malaysian airliner was recently shot down. It is also the most relevant east vs.west conflict zone as each side is directly supported by either the E.U. (Ukraine government) or Russia (rebels).

In addition to this is the war on the Gaza Strip, where Israel is using armed drones among other hardware and either accidentally or purposefully attacking civilians. In this case, Hamas, an Islamist group, fires rockets from Gaza into Israel and Israel responds with overbearing military force, even blockading access to Palestineans' food, water and medical supplies at times.Here is the latest from there.

He said the military was targeting the Hamas tunnel network, which it could not do "only from the air".

Thousands of troops moved into parts of Gaza on Thursday night, backed by tanks and artillery fire.

Hamas, the Palestinian group that controls Gaza, has said Israel will "pay a high price" for the invasion.

A war involving many large nations in all different parts of the world. The name is commonly given to the wars of 1914–18 and 1939–45, although only the second of these was truly global.

Drug War-Related Homicides In The US Average At Least 1,100 a Year

Thanks, Xuenchen. The Mexico drug war is on the list.

originally posted by: aLLeKs
Hmm interesting, I made this list in my head this morning.
Guess I missed a lot.

That's what I was doing originally, and I decided to do some research to learn more specifics.
edit on 19amSat, 19 Jul 2014 01:06:52 -0500kbamkAmerica/Chicago by darkbake because: (no reason given)

originally posted by: xuenchen
They forgot the U.S. drug war.

Drug War-Related Homicides In The US Average At Least 1,100 a Year

They also forgot the war on unarmed, non-violent, no-knock warrant for the wrong house and disabled citizens by the police in the US. I haven't been able to get accurate numbers yet but it looks like between about 900 and 1400 for 2013. 2014 looks like it will be a "bumper" year.

posted on Jul, 19 2014 @ 02:45 AM
link
Drag Europe into a war and its no doubt a World War scenario, at least little old Australia can stay away from all this mess hopefully.

I know of an instance where someone I know who is disabled was taken advantage of by police, who had just been told by his mother he was disabled, in order to search his belongings without a warrant.

originally posted by: mazzroth
Drag Europe into a war and its no doubt a World War scenario, at least little old Australia can stay away from all this mess hopefully.

I think that dragging Europe into the war will get the "World War" label. Especially if there is fighting on the ground in Europe.
edit on 20amSun, 20 Jul 2014 04:06:36 -0500kbamkAmerica/Chicago by darkbake because: (no reason given)